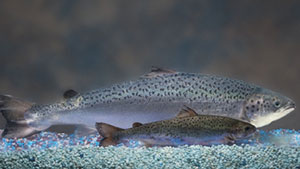 So, in the summer of 2017, I read something about an Eclipse creating high tides possibly being the cause of farmed fish nets breaking.  Of course, I  rolled my eyes without having finished the article, but a couple of weeks later I find out that everything my dad feared and spoke of when i was a kid was now a reality on a whole new level. That not only had some fish pens broken and hundreds of thousands of what some call frankenfish escaped but the equipment was beyond disrepair least we talk about sanitation. In fact, we also found out that this was not the first time either but possibly was withheld from the public; this most recent seems to have been the worst incident!  Reports are that a company, this one from Canada was told by officials that repairs were needed then warned again with apparently no or a very slow response by the owners of this fish farm of Atlantic salmon which resulted in an emergency.  I call these fish frankenfish; the scientific name – aquaculture fish – about 305K of them were or are still loose in the San Juan’s right this very moment and while the incident had happened a few weeks prior the story was not given much airtime so by the time I heard it, sadly it was old news.

The idea of sustainable living is not new, yet, it means something different depending on what State you live in and how your officials deal with the agencies we are supposed to trust whether the issue is about fracking, farmed fish, housing, groundwater, GMO, salmonella etc. or bird flu.  Most people I know love all kinds of food and are careful about at home preparation, but I do believe that the way food is inspected, accepted and processed by our government is still suspect and an update in federal laws regarding food inspection are overdue.  I hope we all agree that our food should not be considered a state’s rights issue; it is a keep the American population safe& healthy issue. I come from a fishing based family that believed in staying away from so-called store freshly caught and to always smell the fish, ask if wild or hatchery and if it’s wrapped in plastic question it all because it may look like the real deal but it’s really an imposter … I will admit I remember when most if not all seafood caught,  was “bought and sold fresh” and or” was wild”  not farmed because my family preferred to buy at the “fish market”  at the pier, but mostly because my family fished.  When farm fisheries started popping up my family felt it might be a good way to keep wild off the endangered list, but unfortunately, some collateral damage was created when rumors and reports of nasty toxic developments at some,  not all hatcheries or farmed raised fish were found.

Well, let us say it again; we all need to worry about the fishing industry as well as civilian fishing in our oceans, lakes, and seas which sadly is on a path toward collapse as overfishing, polluters, plastics and the corporate fishing industry need a refresher on regulatory rules least we ALL remind them to protect our wild and marine life for the next generation

Unfortunately, folks did not know in the early stages the impact influx of farmed fish to grocery stores and restaurants meant insufficient labeling or the profound lack of available information for consumers to make independent and or intelligent decisions by leaving out info whether it’s about fish, beef, chicken, clothes or toys they are selling comes from the most “environmentally friendly” way possible instead of taking risks that could hurt lives

However, it is obvious that as those at the top debate and delay changes in our man-made and natural global warming experiences, they are leaving minorities and the poor out of the conversation of sustainable living, let alone offer up alternatives or commit to viable restorations of communities most impacted by bad urban planning and fracking. We have all heard or know that certain populations are definitely unable to control the negative impact that some big corporations are having on their communities or environments as more and more cases are revealed, aired and reported. It is disturbing to know that some cases are over twenty-thirty years old or older, the sad truth that there were are too many middle class, minority and poor communities built on or near freeways,  landfills, gas lines, ex-chemical plants, manufacturer plants or smokestacks with dirty air while providing jobs at those same facilities though the people had no idea that they and the lives of their families could be negatively affected and life in some cases probably cut short. The abuse of land in rural-urban and mountain settings is not just offensive it is still unchecked, just one more thing the EPA needs to revisit but as are so many things in this era of trump, unfortunately, Congress, is under Republican control in both chambers, the House, where legislative purse strings are under tremendous stress and if you listen closely, they sound like they had different school books and teachers, so, the path to 21st Century living is going to be a struggle