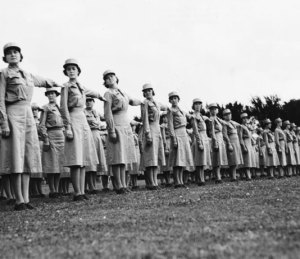 Women’s Army Auxiliary Corps (WAAC)
With war looming, U.S. Rep. Edith Nourse Rogers of Massachusetts introduced a bill for the creation of the Women’s Army Auxiliary Corps in May 1941. Having been a witness to the status of women in World War I, Rogers vowed that if American women served in support of the Army, they would do so with all the rights and benefits afforded to Soldiers.

Spurred on by the attack on Pearl Harbor on Dec. 7, 1941, Congress approved the creation of WAAC on May 14, 1942. President Franklin D. Roosevelt signed the bill into law on May 15, and on May 16, Oveta Culp Hobby was sworn in as the first director. WAAC was established “for the purpose of making available to the national defense the knowledge, skill, and special training of women of the nation.”

14 May 1961, Anniston, Alabama, — Passengers of this smoking Greyhound bus, some of the members of the “Freedom Riders,” a group sponsored by the Congress of Racial Equality (CORE), sit on the ground after the bus was set afire 5/14, by a mob of Caucasians who followed the bus from the city. The mob met the bus at the terminal, stoned it &amp; slashed the tires, then followed the bus from town. BPA2# 47. — Image by © Bettmann/CORBIS