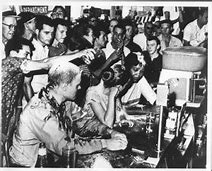 In 1963, Dr. King was arrested at a rally in Birmingham, Ala. while protesting against segregation at lunch counters. The letter he wrote during his 11-day imprisonment argued that “Injustice anywhere is a threat to justice everywhere,” and set the tone for the civil rights movement by inspiring like-minded people to join him in uniting against injustice.