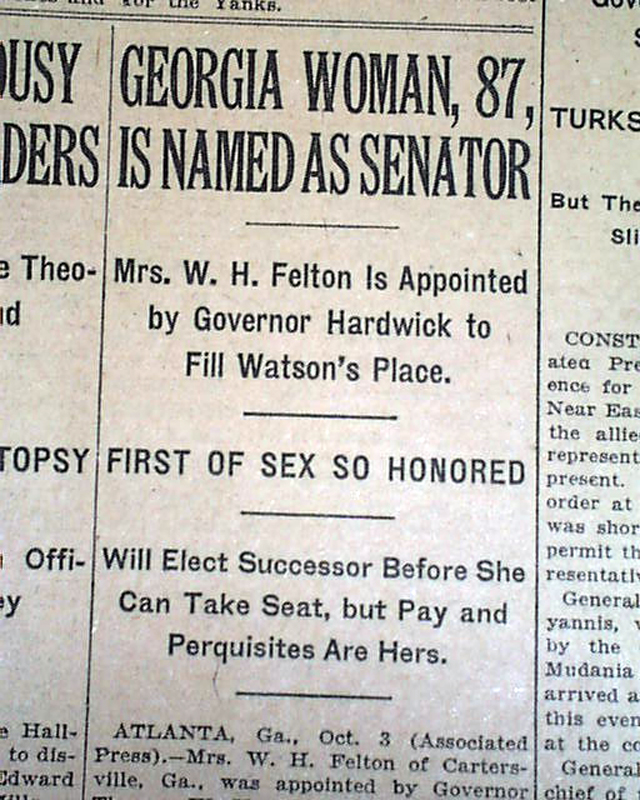 This 48 page newspaper has one column headlines on the front page that include: “GEORGIA WOMAN, 87, IS NAMED AS SENATOR”, “Mrs. W.H. Felton Is Appointed by Governor Hardwick to Fill Watson’s Place”, “FIRST OF SEX SO HONORED” and more. (see)

Tells of the very 1st United States female senator being officially chosen. A historic item on the beginnings of Women in politics.

Other news of the day. Usual browning with some margin wear and tear, otherwise good. Should be handled with care.

wikipedia notes: Rebecca Ann Latimer Felton (June 10, 1835 – January 24, 1930) was a white supremacist American writer, teacher, reformer, and briefly a politician who became the first woman to serve in the United States Senate, filling an appointment on November 21, 1922, and serving until the next day. At 87 years old, 9 months and 22 days, she was also the oldest freshman senator to enter the Senate. As of 2009, she is also the only woman to have served as a Senator from Georgia.

In 1922, Governor Thomas W. Hardwick was a candidate for the next general election to the Senate, when Senator Thomas E. Watson died prematurely. Seeking an appointee who would not be a competitor in the coming special election to fill the vacant seat, and a way to secure the vote of the new women voters alienated by his opposition to the 19th Amendment, Hardwick chose Felton to serve as Senator on October 3, 1922.