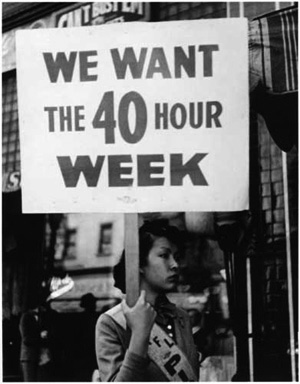 On October 24, 1940 the 40-hour workweek went into effect under the Fair Labor Standards Act. The new law had been signed by President Roosevelt in 1938.

For millions, a movement to bring back the 40-hour workweek is actually needed today. Due to high unemployment, among many other factors, many who are lucky enough to have a job work up to 60 or more hours when their bosses say its needed.

No one knows better than the workers themselves the harm this can do to personal and family life, health, overall wellbeing and just about every other aspect of our lives.

What many younger workers today don’t realize is that from 1940 until perhaps 1990 or even longer most people, including businesses, operated under the assumption that when people work more than 40 hours they do not just themselves but their companies harm. Mistakes and dangerous situations develop when people work until they are physically and mentally exhausted.

Despite the common sense in this, many bosses refuse to accept the truth that working more than 40 hours makes the worker less useful and less productive in both the short and the long term.

It took the organized activity of workers, led by their unions, to build awareness of this and lead the struggles for the 40-hour workweek. It took those things earlier in American history to end child labor and win the fight for the eight-hour day. It seems it will take beating back the attacks we see on the rights of workers today to restore not just full employment but decent wages and a 40-hour workweek.