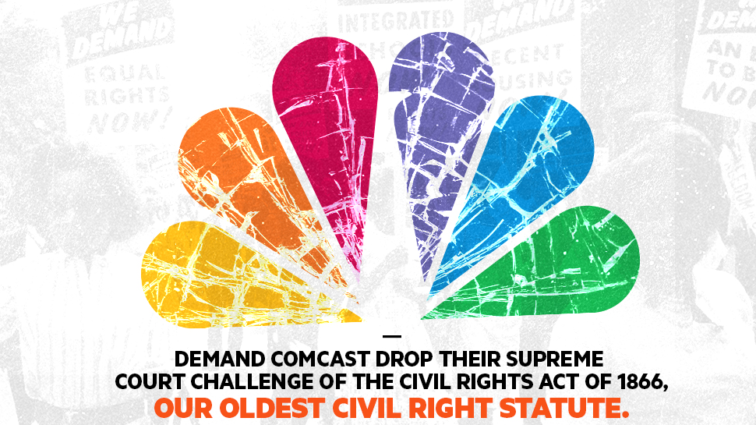 Comcast and the Trump administration are working to strike down key provisions of one of the oldest and most important civil rights laws in the country: the Civil Rights Act of 1866.

We cannot allow Comcast’s board and executive leadership to quietly dismantle civil rights laws so that it can pad its bottom line by discriminating against Black people. We still have time to force Comcast to withdraw its petition from the Supreme Court. But we need to act fast to turn up the pressure on its board of directors before it’s too late!

Demand Comcast withdraw its Supreme Court petition challenging the Civil Rights Act of 1866, our oldest civil rights statute.
Color Of Change has reached out to Comcast executives and board members directly to request its Supreme Court petition to be dropped. However, Comcast and its executives refuse to accept its legal defense will roll back civil rights protections. For a company that prides itself on being dedicated to diversity and inclusion in all facets of its business, it is clear these efforts may be contradicted at any time to protect the Comcast’s bottom-line.

Black people already face extensive barriers in accessing justice and economic equality in this country, and this petition would serve only to allow corporations off the hook for their discriminatory practices.
For Tatiana Denson, a 40-year-old Black woman who had the police called on her for trying to open a business checking account at a PNC Bank, or Judi Brown, a Black transgender woman who was subjected to transphobic and racist slurs and harassment by her manager and coworkers at a Circle K, this law is their only pathway to justice.3,4 Comcast’s petition would make it so that Black people like Tatiana and Judi would have to prove that racism was the only driver of a decision or denial. Instead of affirming that racism has no place in the negotiation of a commercial contract, Comcast is partnering with a Department of Justice that is openly hostile to the civil rights of Black people. Together, they condone the inclusion of racism as a legitimate basis for refusing to enter into a contract with Black people — as long as racism is not the “only reason.”5
We must ensure there are proper protections for our people now and for years to come. Demand Comcast drop its Supreme Court petition for a Civil Rights Act of 1866 hearing.

Section 1981 of the Civil Rights Act of 1866 places Black people on equal footing with white Americans by outlawing conduct that would prevent our communities from developing the means to work, build wealth, or have access to the justice system to vindicate our rights. Comcast is using an important piece of legislation to win a legal battle in an effort to disregard the large-scale effects of an adverse Supreme Court decision.6 What is at stake is more important than television programming.

Comcast’s persistent pursuit of a ruling undermining civil rights laws, despite our efforts to engage the corporation directly, places it at the forefront of coordinated efforts by this administration to strike down centuries of civil rights progress. Comcast must be held accountable for attempting to reverse legislation enacted to ensure the economic and civil protections of Black People. Demand Comcast drop its Civil Rights Act of 1866 Supreme Court petition.
By leveraging a relationship with an administration that pursues white nationalist ideals to block Black economic and media power, Comcast is standing on the wrong side of history, and this cannot go without consequence. It is critical that Comcast reconsider its petition to the Supreme Court, given the extensive harms that a ruling in its favor could extend to Black people, Black businesses, and Black economic equality.

Stop Comcast from setting an oppressive precedent that would make proving racial discrimination practically impossible.
Until justice is real,