Seventeenth Amendment, amendment (1913) to the Constitution of the United States that provided for the direct electi 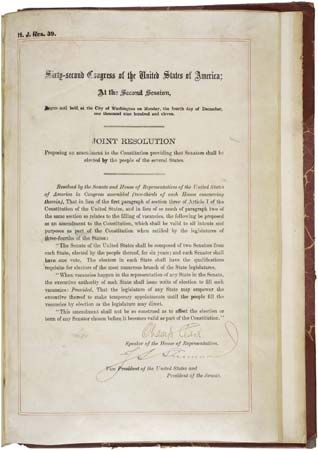 on of U.S. senators by the voters of the states.

It altered the electoral mechanism established in Article I, Section 3 of the Constitution, which had provided for the appointment of senators by the state legislatures.

Adopted in the Progressive era of democratic political reform, the amendment reflected popular dissatisfaction with the corruption and inefficiency that had come to characterize the legislative election of U.S. senators in many states.

The amendment changed the wording of Article I, Section 3, Paragraph 1 to state that “two Senators from each State” should be “elected by the people thereof” rather than “chosen by the Legislature thereof.” It also revised Paragraph 2 of Section 3 to allow the state executive to fill vacancies in the Senate by making temporary appointments to serve until new elections could be held.

The full text of the amendment is

By the time of the amendment’s adoption, many states had already established mechanisms that effectively allowed voters to choose the senators of their state (e.g., by having the legislature appoint the winners of party primaries). Nevertheless, the amendment was widely seen as necessary to reduce the influence of big business and other special interests on the selection of senators and to prevent vacancies or frequent turnover in the Senate caused by party wrangling or changes of party leadership at the state level. In the late 20th century some conservative political scholars called for the repeal of the Seventeenth Amendment on the grounds that it undermined the proper balance of power between the federal government and the states (see also states’ rights).