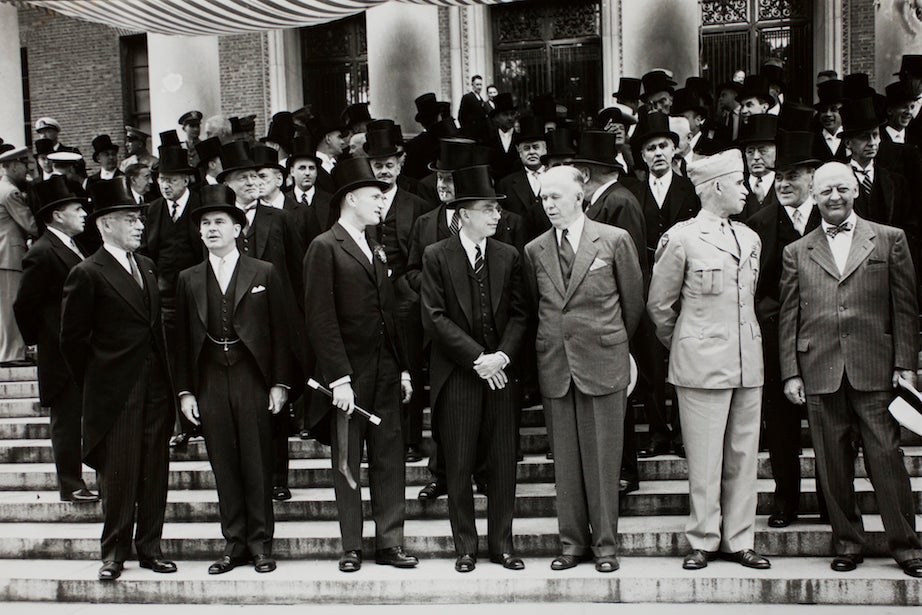 When Secretary of State Marshall accepted an invitation from Harvard University to receive an honorary degree during the first week in June 1947, the State Department informed the president of the Alumni Association that Marshall would make a speech for the afternoon meeting of the Harvard Alumni Association but that Marshall did not want it to be a major speech of the occasion. There were no discussions with representatives of other governments; there were no notifications of the American press that an important speech was to be delivered, and even Harvard President James B. Conant did not expect a major address from General Marshall.

The speech was drafted by Chip Bohlen, a Russia specialist and interpreter who used memoranda from the Director of the Policy Planning Staff George F. Kennan and from Under Secretary of State for Economic Affairs William Clayton. Bohlen especially benefited from Clayton’s graphic oral descriptions of Europe’s situation. In the memorandum he wrote, “Millions of people in the cities are slowly starving,” if the standard of living continued to deteriorate, “there will be revolution.”

On the day of the speech the capacity crowd of 15,000 in Harvard Yard did not expect to see history made but simply to see one of the most admired public servants in America. However when Secretary Marshall began to read his speech there was a recognition that the carefully worded remarks on the political and economic crisis in Europe marked an important event. In that speech, Marshall outlined the need for an economic aid plan to help the devastated nations of Europe and their citizens to recover from the ravages of World War II. When Marshall said, “It is logical that the United States should do whatever it is able to do to assist in the return of normal economic health in the world, without which there can be no political stability and no assured peace,” the Secretary of State committed the United States to consider a European recovery plan that would be developed by the Europeans and presented to the United States. Thus was launched The Marshall Plan for which George C. Marshall would be awarded the Nobel Peace Prize