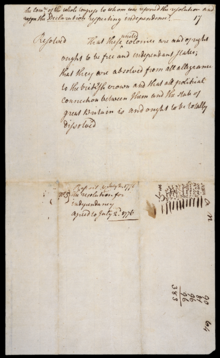 “The Resolution for Independence agreed to July 2, 1776”. The marks at the bottom right indicate the 12 colonies that voted for independence. The Province of New York abstained.

The Lee Resolution was the formal assertion passed by the Second Continental Congress on July 2, 1776, which resolved that the Thirteen Colonies in America were “free and independent States”, separated from the British Empire and creating what became the United States of America. News of this act was published that evening in the Pennsylvania Evening Post and the next day in the Pennsylvania Gazette. The Declaration of Independence is the formal document that officially announced and explained the resolution, approved two days later on July 4, 1776.