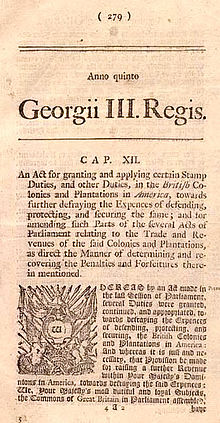 Congress approved thirteen resolutions in the Declaration of Rights and Grievances. It is important to note that colonists, at that point in time, were not intending on separation from the crown. In the first resolution, they stated their allegiance to the king and its Parliament. They declared and affirmed that they were entitled to the rights and liberties of all British subjects. Most importantly they asserted their right to “No taxation without representation” and that because of their circumstances, America was three thousand miles away, they could not be represented in the House of Commons in Britain. The only bodies legally able to impose an internal tax were their respective legislatures whose members were elected by the public.

The Stamp Act Congress declared the Stamp Act duties as extremely bothersome as the scarcity of specie made its payment impractical. Local profits would suffer from the payment of the duty ultimately affecting transatlantic trade. Congress also supported the boycott of British goods.

The colonists also wanted to reassert their right to trial by jury as an inherent right to all British subjects in the colonies and limit the jurisdiction of Admiralty Courts. These courts could try a case anywhere within the British Empire; cases were decided by judges instead than by juries. In addition, judges and naval officers were paid based on the fines they levied leading to abuses.

The colonial petition was rejected on the basis of having been submitted by an unconstitutional assembly. The Stamp Act was eventually repealed primarily based on economic concerns expressed by British merchants.

However, parliament in order to reassert its power and constitutional issues over its right to tax its colonies passed the Declaratory Act.

Colonies sent the following delegates to the Stamp Act Congress: