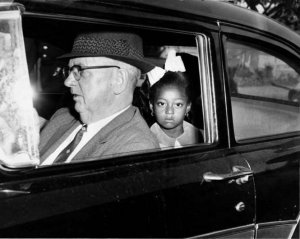 According to The Times-Picayune, “As New Orleans desegregated, it was the children who led us,” by Jarvis DeBerry on 17 November 2010:

They sent their babies into a mob.

That’s what’s so impressive — and bewildering — about the parents of Ruby Bridges, Gail Etienne, Pam Foreman, Yolanda Gabrielle, Tessie Prevost and Leona Tate. Fifty years ago this week, they sent their babies — five first-graders and a kindergartner — to William Frantz Elementary and McDonogh No. 19 through a gauntlet of spewing and sputtering segregationists so committed to their backwardness that they assembled to yell obscenities at small children.

If the natural instinct of most parents is to protect their children from harm, how remarkable it is that the parents of Gail, Leona, Pam, Ruby, Tessie and Yolanda deliberately sent them into harm’s way. The girls were sometimes escorted through the hostile crowds by badge-wearing U.S. marshals, which put the protesters on notice that physical violence wouldn’t be tolerated. But those stony-faced federal officers couldn’t protect the girls from the insults being hurled at them. We can take some solace, though, that some of the language was too complex for the intended targets to understand. 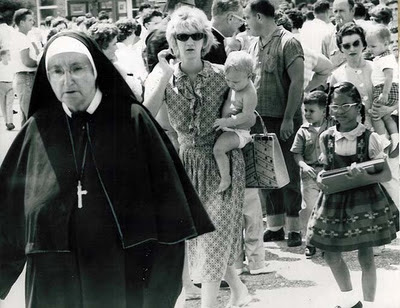 Ruby Bridges, for example, taught one of her playmates a new chant she’d heard, and the girls jumped rope to it: “Two, four, six, eight, we don’t want to integrate.”

Nobody would have blamed the girls’ parents if they’d decided to protect their children from such hate-filled madness. Good people would have understood if the parents succumbed to a loving impulse to cover the girls’ eyes and ears and remove them from a campus where so many bigots had gathered to yell at them. Nobody would have blamed them. Which makes their decisions all the more worthy of praise. They didn’t have to buck against the status quo. They didn’t have to offer their children up for the integration experiment. But they did. 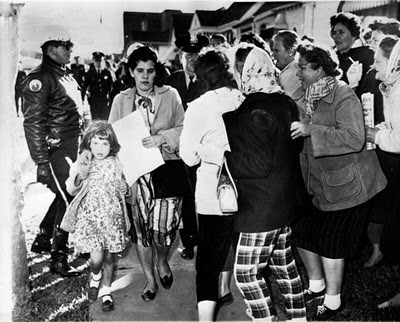 That goes for the black parents who sent their children to Frantz and McDonogh No. 19 and the parents of the two white girls who refused to succumb to mob-rule and enroll their children elsewhere. Pam’s father was a preacher and a war veteran who, according to the writer John Updike, “wasn’t going to let a mob of women tell him what to do.” Yolanda’s mother was initially afraid for the girl’s safety but kept her at Frantz because, she said, “It was the principle of the thing.” 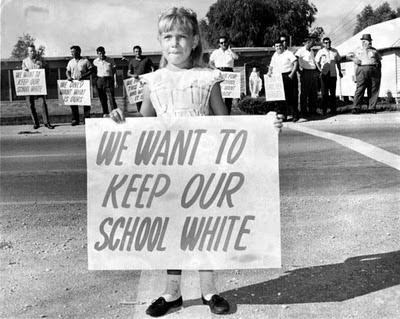 New Orleans
In Mark Twain’s 1901 essay “The United States of Lyncherdom” that he was, ironically, too afraid to have published while he was alive, Twain argued that lynchings were common not because mobs are uniformly blood-thirsty but uniformly cowardly. As he saw it, “man’s commonest weakness” is “his aversion to being unpleasantly conspicuous, pointed at, shunned, as being on the unpopular side …

“When there is to be a lynching the people hitch up and come miles to see it, bringing their wives and children. Really to see it? No — they come only because they are afraid to stay at home, lest it be noticed and offensively commented upon.” 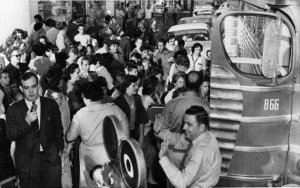 New Orleans students are loaded onto buses to be transported to St. Bernard Parish, November 28, 1960, after McDonogh 19 school was integrated in September.

I’m sure Twain is going too far when he says the “only” reason somebody would show up to such a gathering would be out of fear. Even so, the peer pressure that kept bigotry alive cannot be discounted. One sees the photos of adults shouting at children and hopes that they felt pressured to be there. That doesn’t absolve them, of course. Their behavior was despicable. But the idea that every protester was as hate-filled and angry as the photos suggest and that they were all internally motivated to hurl obscenities at little girls is too awful to contemplate. 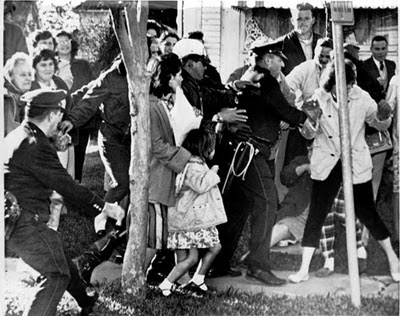 Children seemed to always be on the front lines in our country’s often bloody battle for civil rights. Not all of them wanted to be. The 1955 lynching of 14-year-old Emmett Till in Money, Miss., shocked the national conscience, and months later, Rosa Parks was refusing to budge from her seat on a Montgomery, Ala., bus. In September 1963, four little girls in Sunday School at Birmingham’s Sixteenth Street Baptist Church died when the Ku Klux Klan attacked their church with dynamite. The next year President Lyndon Johnson signed the Civil Rights Act.

And in 1960, six little girls in New Orleans — four black, two white — were sent by their parents into a hate-filled mob. What a heart-wrenching decision that must have been.

What a sad place this would be if they hadn’t made it. (source: The Times-Picayune)

1832 – The first streetcar went into operation in New York City, NY. The vehicle was horse-drawn and had room for 30 people.

1881 – Charles J. Guiteau’s trial began for the assassination of U.S. President Garfield. Guiteau was convicted and hanged the following year.

1889 – New York World reporter Nellie Bly (Elizabeth Cochrane) began an attempt to surpass the fictitious journey of Jules Verne’s Phileas Fogg by traveling around the world in less than 80 days. Bly succeeded by finishing the journey the following January in 72 days, 6 hours and 11 minutes.

1935 – U.S. President Franklin D. Roosevelt proclaimed the Philippine Islands a free commonwealth after its new constitution was approved. The Tydings-McDuffie Act planned for the Phillipines to be completely independent by July 4, 1946.

1940 – During World War II, German war planes destroyed most of the English town of Coventry when about 500 Luftwaffe bombers attacked.

1956 – The USSR crushed the Hungarian uprising.

1969 – During the Vietnam War, Major General Bruno Arthur Hochmuth, commander of the Third Marine Division, became the first general to be killed in Vietnam by enemy fire.

1979 – U.S. President Carter froze all Iranian assets in the United States and U.S. banks abroad in response to the taking of 63 American hostages at the U.S. embassy in Tehran, Iran.

1983 – The British government announced that U.S.-made cruise missiles had arrived at the Greenham Common air base amid protests.

1989 – The U.S. Navy ordered an unprecedented 48-hour stand-down in the wake of a recent string of serious accidents.

1991 – After 13 years in exile Cambodian Prince Norodom Sihanouk returned to his homeland.

1994 – U.S. experts visited North Korea’s main nuclear complex for the first time under an accord that opened such sites to outside inspections.

1995 – The U.S. government instituted a partial shutdown, closing national parks and museums while most government offices operated with skeleton crews.

2012 – The game Candy Crush Saga was released as a mobile app for iPhones.