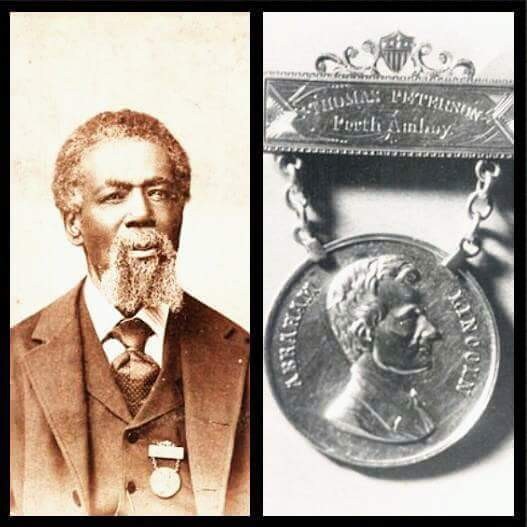 Thomas Peterson-Mundy of Perth Amboy, New Jersey, became the 1st African American to vote. His vote was under the authority of the 15th Amendment, a day after it was adopted.

Peterson was born in Metuchen, New Jersey. His father, also named Thomas, worked for the Mundy family. It is unclear if he was a slave of the family or not. His mother, Lucy Green, was a slave of Hugh Newell (1744-1816) of Freehold Township, New Jersey. She was manumitted at age 21 by Newell’s will.

He was a school custodian and general handyman in Perth Amboy. Active in the Republican Party, he became that the city’s first African-American to hold elected office, on the Middlesex County Commission. He was also the city’s 1st “colored” person to serve on a jury.

Peterson voted in a local election held in Perth Amboy, NJ over the town’s charter. Some citizens wanted to revise the existing charter while others wished to abandon the charter altogether in favor of a township form of government. Peterson cast his ballot in favor of revising the existing charter. This side won 230 to 63. Peterson was afterward appointed to be a member of the committee of seven that made the revisions. Historical records as to his contribution to revisions in the form of minutes, writing, or other records are still wanting.

Read more about his life & legacy at  DailyBlackHistoryFacts

1492 – King Ferdinand and Queen Isabella of Spain issued the Alhambra edict expelling Jews who were unwilling to convert to Christianity.

1776 – Abigail Adams wrote to her husband John that women were “determined to foment a rebellion” if the new Declaration of Independence failed to guarantee their rights.

1831 – Quebec and Montreal were incorporated as cities.

1854 – The U.S. government signed the Treaty of Kanagawa with Japan. The act opened the ports of Shimoda and Hakotade to American trade.

1862 – Skirmishing between Rebels and Union forces took place at Island 10 on the Mississippi River.

1870 – In Perth Amboy, NJ, Thomas Munday Peterson became the first black to vote in the U.S.

1880 – Wabash, IN, became the first town to be completely illuminated with electric light.

1900 – The W.E. Roach Company was the first automobile company to put an advertisement in a national magazine. The magazine was the “Saturday Evening Post“.

1900 – In France, the National Assembly passed a law reducing the workday for women and children to 11 hours.

1901 – In Russia, the Czar lashed out at Socialist-Revolutionaries with the arrests of 72 people and the seizing of two printing presses.

1904 – In India, hundreds of Tibetans were slaughtered by the British.

1905 – Kaiser Wilhelm arrived in Tangier proclaiming to support for an independent state of Morocco.

1906 – The Conference on Moroccan Reforms in Algerciras ended after two months with France and Germany in agreement.

1917 – The U.S. purchased and took possession of the Virgin Islands from Denmark for $25 million.

1918 – For the first time in the U.S., Daylight Saving Time went into effect.

1921 – Great Britain declared a state of emergency because of the thousands of coal miners on strike.

1933 – The “Soperton News” in Georgia became the first newspaper to publish using a pine pulp paper.

1945 – “The Glass Menagerie” by Tennessee Williams opened on Broadway.

1946 – Monarchists won the elections in Greece.

1948 – The Soviets in Germany began controlling the Western trains headed toward Berlin.

1949 – Winston Churchill declared that the A-bomb was the only thing that kept the U.S.S.R. from taking over Europe.

1949 – Newfoundland entered the Canadian confederation as its 10th province.

1959 – The Dalai Lama (Lhama Dhondrub, Tenzin Gyatso) began exile by crossing the border into India where he was granted political asylum. Gyatso was the 14th Daila Lama.

1960 – The South African government declared a state of emergency after demonstrations led to the death of more than 50 Africans.

1966 – The Soviet Union launched Luna 10, which became the first spacecraft to enter a lunar orbit.

1967 – U.S. President Lyndon Johnson signed the Consular Treaty, the first bi-lateral pact with the Soviet Union since the Bolshevik Revolution.

1976 – The New Jersey Supreme Court ruled that Karen Anne Quinlan could be disconnected from a respirator. Quinlan remained comatose until 1985 when she died.

1981 – In Bangkok, Thailand, four of five Indonesian terrorists were killed after hijacking an airplane on March 28.

1993 – Brandon Lee was killed accidentally while filming a movie.

1994 – “Nature” magazine announced that a complete skull of Australppithecus afarensis had been found in Ethiopia. The finding is of humankind’s earliest ancestor.

1998 – Buddy Hackett received a star on the Hollywood Walk of Fame.

1998 – For the first time in U.S. history the federal government’s detailed financial statement was released. This occurred under the Clinton administration.

1999 – Three U.S. soldiers were captured by Yugoslav soldiers three miles from the Yugoslav border in Macedonia.

1999 – Fabio was hit in the face by a bird during a promotional ride of a new roller coaster at the Busch Gardens theme park in Williamsburg, VA. Fabio received a one-inch cut across his nose.

2000 – In Uganda, officials set the number of deaths linked to a doomsday religious cult, the Movement for the Restoration of the Ten Commandments, at more than 900. In Kanungu, a March 17 fire at the cult’s church killed more than 530 and authorities subsequently found mass graves at various sites linked to the cult.

2004 – Google Inc. announced that it would be introducing a free e-mail service called Gmail.