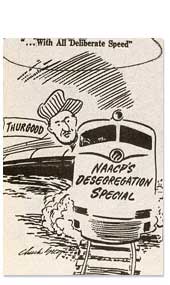 “With All Deliberate Speed”
The Brown decision declared the system of legal segregation unconstitutional. But the Court ordered only that the states end segregation with “all deliberate speed.” This vagueness about how to enforce the ruling gave segregationists the opportunity to organize resistance.

Although many whites welcomed the Brown decision, a large number considered it an assault on their way of life. Segregationists played on the fears and prejudices of their communities and launched a militant campaign of defiance and resistance. 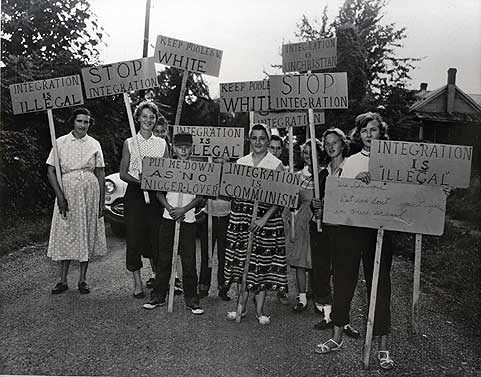 Southern congressmen and governors attacked the Supreme Court’s decision. Through state and local governments and private organizations, white supremacists attempted to block desegregation. People across the country, like these from Poolesville, Maryland, in 1956, took to the streets to protest integration. This kind of opposition exposed the deep divide in the nation, and revealed the difficulty of enforcing the high court’s decision.

4 thoughts on “1955 – The U.S. Supreme Court ordered that all states must end racial segregation “with all deliberate speed.””