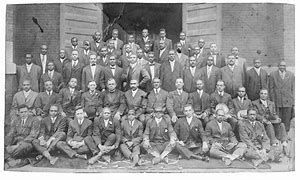 On May 30, 1921, Dick Rowland, a young African American shoe shiner, was accused of assaulting a white elevator operator named Sarah Page in the elevator of a building in downtown Tulsa. The next day the Tulsa Tribune printed a story saying that Rowland had tried to rape Page, with an accompanying editorial stating that a lynching was planned for that night. That evening mobs of both African Americans and whites descended on the courthouse where Rowland was being held. When a confrontation between an armed African American man, there to protect Rowland, and a white protestor resulted in the death of the latter, the white mob was incensed, and the Tulsa riot was thus ignited.

Over the next two days, mobs of white people looted and set fire to African American businesses and homes throughout the city. Many of the mob members were recently returned World War I veterans trained in the use of firearms and are said to have shot African Americans on sight. Some survivors even claimed that people in airplanes dropped incendiary bombs.

When the riot ended on June 1, the official death toll was recorded at 10 whites and 26 African Americans, though many experts now believe at least 300 people were killed. Shortly after the riot there was a brief official inquiry, but documents related to the riot disappeared soon afterward. The event never received widespread attention and was long noticeably absent from the history books used to teach Oklahoma schoolchildren.