The Gadsden Purchase, or Treaty, was an agreement between the United States and Mexico, finalized in 1854, in which the United States agreed to pay Mexico $10 million for a 29,670 square mile portion of Mexico that later became part of Arizona and New Mexico. Gadsden’s Purchase provided the land necessary for a southern transcontinental railroad and attempted to resolve conflicts that lingered after the 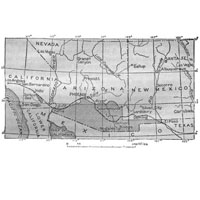 While the Treaty of Guadalupe Hidalgo formally ended the Mexican-American War in February 1848, tensions between the Governments of Mexico and the United States continued to simmer over the next six years. The two countries each claimed the Mesilla Valley as part of their own country. The Mexican Government demanded monetary compensation for Native American attacks in the region because, under the Treaty, the United States had agreed to protect Mexico from such attacks; however, the United States refused to comply, insisting that while they had agreed to protect Mexico from Native American attacks, they had not agreed to financially compensate for attacks that did occur. The persistent efforts of private American citizens to enter Mexico illegally and incite rebellions in an effort to gain territory exacerbated tensions between the governments.