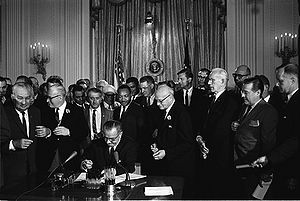 On this day in 1964, the Senate was involved in an epic fight over the Civil Right Act, after a group of Southern senators started a record-setting filibuster in March.

The Act was signed by President Lyndon Baines Johnson on July 2, 1964, but not before a lengthy, protracted fight in Washington. In fact, no full-featured Civil Rights Act proposal had ever survived a filibuster attempt on the Senate floor. Under the old Senate rules, two-thirds of the Senate would need to vote for cloture, or limiting debate time on the floor. (Today, the cloture barrier stands at 60 votes.)

The Act had been approved by the House of Representatives in February 1964, and Senate majority leader Mike Mansfield made the unusual move of bypassing the Judiciary Committee (which was chaired by an anti-bill Senator) and placing the Act directly on the Senate’s main calendar.
But when Mansfield made the first motion about the bill in the Senate, the well-organized filibuster attempt started. And had it been successful, the Civil Rights Act would have been finished for that Senate session.
A year earlier, President John F. Kennedy told a nationwide audience that the Act was a necessity. A prior bill, the Civil Rights Act of 1957, was important but it had a limited impact and it was difficult to enforce. It also had survived a 24-hour filibuster from Senator Strom Thurmond.
As Senate Majority Leader, Lyndon Johnson has been involved heavily in the fight for the Civil Rights Act of 1957, and as President, he was committed to honoring his own values and Kennedy’s legacy in the fight for the much-more comprehensive 1964 act.
Committed to the filibuster effort were the powerful Senators Richard Russell, Thurmond, Robert Byrd, William Fulbright and Sam Ervin. Russell started the filibuster in late March 1964, and it would last for 60 working days in the Senate.
Behind the scenes, two opposing leaders were working to find a way to get 67 votes: the Democratic Senate whip, Hubert Humphrey and the Senate Minority Leader, Everett Dirksen of Illinois.
At first, Dirksen opposed the House version of the bill because of certain passages, even though he was a long-time civil rights supporter. Humphrey, a Democrat, worked together with his Republican colleague to make the bill more acceptable to Republicans, while not weakening its powers.
On June 10, 1964, Dirksen made a powerful speech that served to bring more Republicans onto his side in the fight.
Dirksen made his case and then quoted the author Victor Hugo: “Stronger than all the armies is an idea whose time has come.” The Senator then reminded his colleagues that the Republican Party stood for equality since its founding in the years before the Civil War.
That same day, the Humphrey-Dirksen group got 71 votes to end the filibuster, four more than needed, as 27 Republicans had decided to support the Act.
During the vote, the terminally ill Senator from California, Clair Engle, was brought to the floor in a wheelchair. Unable to speak because of a brain tumor, Engle pointed to his eye to signify his Yes vote.
President Johnson signed the bill on July 2 in a nationally televised ceremony.
The new law prohibited discrimination in public places. It also provided for the integration of schools and other public facilities, and it made employment discrimination illegal.
Recent Historical Stories on Constitution Daily
The remarkable career of Charles Evans HughesOn This Day, Lee surrenders at Appomattox10 fascinating facts about Robert E. Lee and Ulysses S. Grant