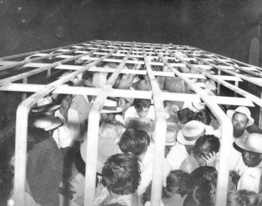 1236 – Ferdinand III of Castile and Leon took Cordoba in Spain.

1652 – Massachusetts declared itself an independent commonwealth.

1776 – The Virginia constitution was adopted and Patrick Henry was made governor.

1804 – Privates John Collins and Hugh Hall of the Lewis and Clark Expedition were found guilty by a court-martial consisting of members of the Corps of Discovery for getting drunk on duty. Collins received 100 lashes on his back and Hall received 50.

1860 – The first iron-pile lighthouse was completed at Minot’s Ledge, MA.

1897 – The Chicago Cubs scored 36 runs in a game against Louisville, setting a record for runs scored by a team in a single game.

1903 – The British government officially protested Belgian atrocities in the Congo.

1905 – Russian troops intervened as riots erupted in ports all over the country. Many ships were looted.

1917 – The Ukraine proclaimed independence from Russia.

1925 – Marvin Pipkin filed for a patent for the frosted electric light bulb.

1926 – Fascists in Rome added an hour to the work day in an economic efficiency measure.

1932 – Siam’s army seized Bangkok and announced an end to the absolute monarchy.

1946 – British authorities arrested more than 2,700 Jews in Palestine in an attempt to end alleged terrorism.

1951 – The United States invited the Soviet Union to the Korean peace talks on a ship in Wonson Harbor.

1953 – The Federal Highway Act authorized the construction of 42,500 miles of freeway from coast to coast.

1955 – The Soviet Union sent tanks to Poznan, Poland, to put down anti-Communist demonstrations.

1966 – The U.S. bombed fuel storage facilities near the North Vietnamese cities of Hanoi and Haiphong.

1972 – The U.S. Supreme Court ruled that the death penalty could constitute “cruel and unusual punishment.” The ruling prompted states to revise their capital punishment laws.

1995 – The shuttle Atlantis and the Russian space station Mir docked, forming the largest man-made satellite ever to orbit the Earth.

1998 – With negotiations on a new labor agreement at a standstill, the National Basketball Association (NBA) announced that a lockout would be imposed at midnight.

2011 – The state of Nevada passed the first law that permitted the operation of autonomous cars on public roads. The law went into effect on March 1, 2012 and did not permit the use of the cars to the general public. Google received the first self-driving vehicle license in the U.S. on May 4, 2012 in Nevada.