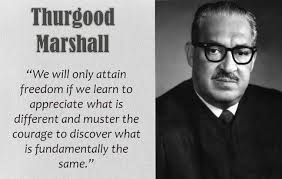 Birthday – The first African American on the U.S. Supreme Court, Thurgood Marshall (1908-1993) was born in Baltimore, Maryland. Nominated by President Johnson, he began his 24-year career on the High Court in 1967.

The great-grandson of a slave, Marshall was born in Baltimore,  July 2,  Maryland, in 1908. After being rejected from the University of Maryland Law School on account of his race, he was accepted at all-black Howard University in Washington, D.C. At Howard, he studied under the tutelage of civil liberties lawyer Charles H. Houston and in 1933 graduated first in his class. In 1936, he joined the legal division of the NAACP, of which Houston was director, and two years later succeeded his mentor in the organization’s top legal post.