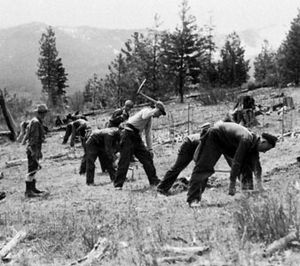 Recruits lived in work camps under a semi-military regime; monthly cash allowances of $30 were supplemented by a provision of food, medical care, and other necessities. The CCC, which at its largest employed 500,000 men, provided work for a total of 3,000,000 during its existence.

Frances Perkins, original name Fannie Coralie Perkins, (born April 10, 1882, Boston, Mass., U.S.—died May 14, 1965, New York, N.Y.), U.S. secretary of labor during the presidency of Franklin D. Roosevelt. Besides being the first woman to be appointed to a cabinet post, she also served one of the longest terms of any Roosevelt appointee (1933–45). When Roosevelt entered the presidency in 1933 he named Perkins secretary of labor, making her the first woman to serve in a cabinet position. After the initial controversy of her appointment died away she settled into a 12-year term of effective administration of her department. She pushed for a minimum wage and maximum workweek, a limit on employment of children under 16, creation of the Civilian

Conservation Corps, and unemployment compensation—all of which were enacted. She helped draft the Social Security Act and supervised the Fair Labor Standards Act (1938). When the focus of labour activity shifted in the late 1930s from the government to unions, Perkins played a less visible role. Her most important work was then the building up of the Department of Labor, particularly the strengthening of the Bureau of Labor Statistics.

Nothing required more urgent attention than the masses of unemployed workers who, with their families, had soon overwhelmed the miserably underfinanced bodies that provided direct relief. On May 12, 1933, Congress established a Federal Emergency Relief Administration to distribute half a billion dollars to state and local agencies. Roosevelt also created the Civil Works Administration, which by January 1934 was employing more than 4,000,000 men and women. Alarmed by rising costs, Roosevelt dismantled the CWA in 1934, but the persistence of high unemployment led him to make another about-face. In 1935 the Emergency Relief Appropriation Act provided almost $5,000,000,000 to create work for some 3,500,000 persons. The Public Works Administration (PWA), established in 1933, provided jobs on long-term construction projects, and the Civilian Conservation Corps put 2,500,000 young men to work planting or otherwise improving huge tracts of forestland. For homeowners, the Federal Housing Administration began insuring private home-improvement loans to middle-income families in 1934; in 1938 it became a home-building agency as well.

The CCC, rooted in the system of public works initiated by President Franklin D. Roosevelt, continued until 1942, acquainting many people with forestry as a major government activity.

britannica.com for several complete articles on the CCC