FDA: Get cancer-causing chemicals out of ALL food packaging now!

The FDA just announced that baby bottles and sippy cups can no longer contain bisphenol A (BPA), a controversial hormone-disrupting chemical that studies show is linked with cancer, obesity, heart disease, and other life-threatening diseases.

This is a huge step towards getting dangerous chemicals out of our food supply. BPA isn’t just found in baby products — routine tests have found BPA in more than 80% of Americans’ bodies. It’s used in packaging food, lining cans for soups and sodas, and more.

Protecting my kids doesn’t stop when they graduate from bottles and sippy cups. I am counting on the FDA to help regulate this dangerous chemical so the people I care about most in the world are safe — no matter how old they are.

I know that together we can make a difference. Last year, I helped pass a ban on BPA in children’s products in my own community in Oregon. Doctors, researchers, and medical experts testified about the risks of this chemical and the importance of keeping BPA out of our children’s bodies. I was moved to tears by the hundreds of people who signed my Change.org petition in support of that campaign, and I hope this petition will make the FDA take notice, too.

Major brands have already begun distancing themselves from BPA due to consumer outrage. These companies have shown great leadership, but moving company by company and product by product is taking too long. BPA will continue to make people sick until it’s out of our food supply for good. We need strong action from the FDA now to protect us, and our kids, from these dangerous chemicals.

You can also check out other popular petitions on Change.org by clicking here.

These savings include a one-time $250 rebate check to seniors who hit the “donut hole” coverage gap in 2010, and a 50 percent discount on brand-name drugs in the …

These savings include a one-time $250 rebate check to seniors who fell into the prescription drug coverage gap known as the “donut hole” in 2010, and a 50 percent

An estimated four million seniors who hit the gap in Medicare prescription drug coverage known as the “donut hole” this year will receive a $250 rebate. First checks …

step, in 2010, nearly four million people in the donut hole received a $250 check to … If they don’t, they must provide consumers a rebate or reduce premiums.

check to help with their costs. In 2011, 3.6 million people with Medicare received … provide consumers a rebate or reduce premiums. Scrutinizing Unreasonable Premium …

… step, in 2010, nearly four million people in the donut hole received a $250 check to … If they don’t, they must provide consumers a rebate or reduce premiums.

2010, nearly four million people in the donut hole received a $250 check to help … If they don’t, they must provide consumers a rebate or reduce premiums.

General Mills made headlines last month when the company announced its opposition to the discriminatory ballot measure in Minnesota that would ban committed, loving same-sex couples from marrying.

The National Organization for Marriage was, of course, not pleased – and promptly launched an ill-conceived campaign calling on consumers to boycott the iconic company for pushing a “radical social agenda.” Since the campaign’s inception, about 20,000 people have signed on.

Please, add your name to our petition. We’re sending a powerful message to General Mills that consumers back companies that support marriage equality. Just last week, Fortune 500 company Thomson Reuter also voiced its support for equality and came out against the amendment.

HRC is a proud supporter of the coalition, Minnesotans United for All Families, working to defeat the amendment banning same-sex marriage in the state.  HRC has set up a special fund – HRC Minnesota Family Freedom PAC – to direct 100 percent of your contribution to defeat the anti-marriage constitutional amendment in Minnesota.

At a hearing on overturning Citizens United, Sen. Whitehouse faced an “expert” from the right-wing Cato Institute who advocated more anonymous campaign spending by corporations and billionaires. Whitehouse took him “to the proverbial woodshed,” according to one news site.

Watch the amazing video here — and join our campaign to overturn Citizens United and Take Back Democracy! 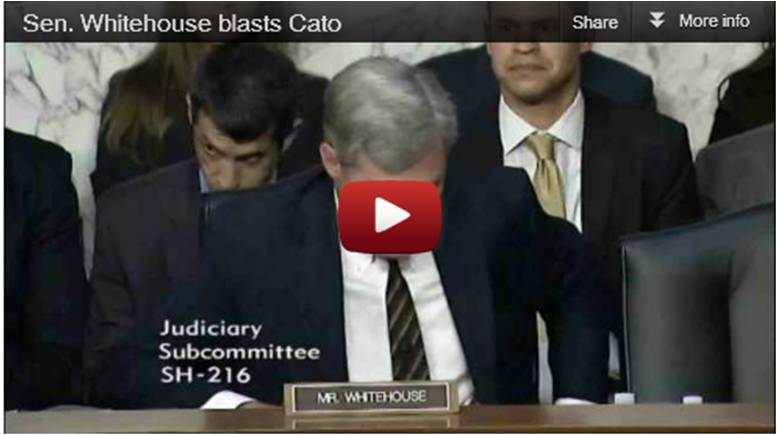 At the hearing, the Cato “expert” said there should be no limits on campaign contributions — and only donations over $500,000 should be disclosed because the Koch brothers and other billionaires deserve their privacy!

Sen. Whitehouse showed that he isn’t afraid of a fight. He asked tough questions, made the Cato guy seem completely foolish, and received applause from the audience. Watch it happen here — and join the fight to Take Back Democracy!

Thanks for being a bold progressive.