1517 – Martin Luther posted the 95 Theses on the door of the Wittenberg Palace Church. The event marked the start of the Protestant Reformation in Germany.

1926 – Magician Harry Houdini died of gangrene and peritonitis resulting from a ruptured appendix. His appendix had been damaged twelve days earlier when he had been punched in the stomach by a student unexpectedly. During a lecture Houdini had commented on the strength of his stomach muscles and their ability to withstand hard blows.

1940 – The British air victory in the Battle of Britain prevented Germany from invading Britain.

1941 – Mount Rushmore was declared complete after 14 years of work. At the time the 60-foot busts of U.S. Presidents George Washington, Thomas Jefferson, Theodore Roosevelt and Abraham Lincoln were finished.

1941 – The U.S. Navy destroyer Reuben James was torpedoed by a German submarine near Iceland. The U.S. had not yet entered World War II. More than 100 men were killed.

1959 – Defense Department announced elimination of all segregated regiments in the armed forces.

1959 – Lee Harvey Oswald, a former U.S. Marine from Fort Worth, TX, announced that he would never return to the U.S.At the time he was in Moscow, Russia.

1961 – In the Soviet Union, the body of Joseph Stalin was removed from Lenin’s Tomb where it was on public display.

1968 – U.S. President Lyndon B. Johnson ordered a halt to all U.S. bombing of North Vietnam.

1983 – The U.S. Defense Department acknowledged that during the U.S. led invasion of Grenada, that a U.S. Navy plane had mistakenly bombed a civilian hospital.

1984 – Indian Prime Minister Indira Gandhi was assassinated near her residence by two Sikh security guards. Her son, Rajiv, was sworn in as prime minister.

1992 – In Liberia, it was announced that five American nuns had been killed near Monrovia. Rebels loyal to Charles Taylor were blamed for the murders.

1993 – River Phoenix died at the age of 23 after collapsing outside The Viper Room in Hollywood.

1993 – The play “Wonderful Tennessee” closed after only 9 performances.

1994 – 68 people were killed when an American Eagle ATR-72, plunged into a northern Indiana farm.

1997 – Louise Woodward, British au pair, was sentenced to life in prison after being convicted of second-degree murder in the death of 8-month-old Matthew Eappen. She was released after her sentence was reduced to manslaughter.

1998 – Iraq announced that it was halting all dealings with U.N. arms inspectors. The inspectors were investigating the country’s weapons of mass destruction stemming from Iraq’s invasion of Kuwait in 1990.

1999 – Leaders from the Roman Catholic Church and the Lutheran Church signed the Joint Declaration on the Doctrine of Justification. The event ended a centuries-old doctrinal dispute over the nature of faith and salvation.

2001 – Microsoft and the U.S. Justice Department reached a tentative agreement to settle the antitrust case against the software company.

1817 – The independent government of Venezuela was established by Simon Bolivar.

1875 – The constitution of Missouri was ratified by popular vote.

1894 – The time clock was patented by Daniel M. Cooper of Rochester, NY.

1938 – Orson Welles’ “The War of the Worlds” aired on CBS radio. The belief that the realistic radio dramatization was a live news event about a Martian invasion caused panic among listeners.

1943 – In Moscow, a declaration was signed by the Governments of the Soviet Union, the United Kingdom, the United States and China called for an early establishment of an international organization to maintain peace and security. The goal was supported on December 1, 1943, at a meeting in Teheran.

1854 – Defense Department announced elimination of all segregated regiments in the armed forces. blackfacts.com

1945 – The U.S. government announced the end of shoe rationing.

1961 – The Soviet Union tested a hydrogen bomb with a force of approximately 58 megatons.

1966 – Huey Newton and Bobby Seale students at a California college create the Black Panther Party for Self Defense. blackfacts.com

1972 – In Illinois, 45 people were killed when two trains collided on Chicago’s south side.

1995 – Federalist prevailed over separatists in Quebec in a referendum concerning secession from the federation of Canada.

1998 – The terrorist who hijacked a Turkish Airlines plane and the 39 people on board was killed when anti-terrorist squads raided the plane.

2001 – Michael Jordan returned to the NBA with the Washington Wizards after a 3 1/2 year retirement. The Wizards lost 93-91 to the New York Knicks.

Did you see this ?

Researchers recently totaled up all the public money Amazon has already received for all their different facilities across the country.

For a multi-billion-dollar company that’s owned by one of the richest people in the world.

And that’s before this whole HQ2 thing, which is totally taking it to the next level. They actually made different cities publicly compete against other on how much they’re willing to offer to be considered as the site of the company’s new second headquarters. 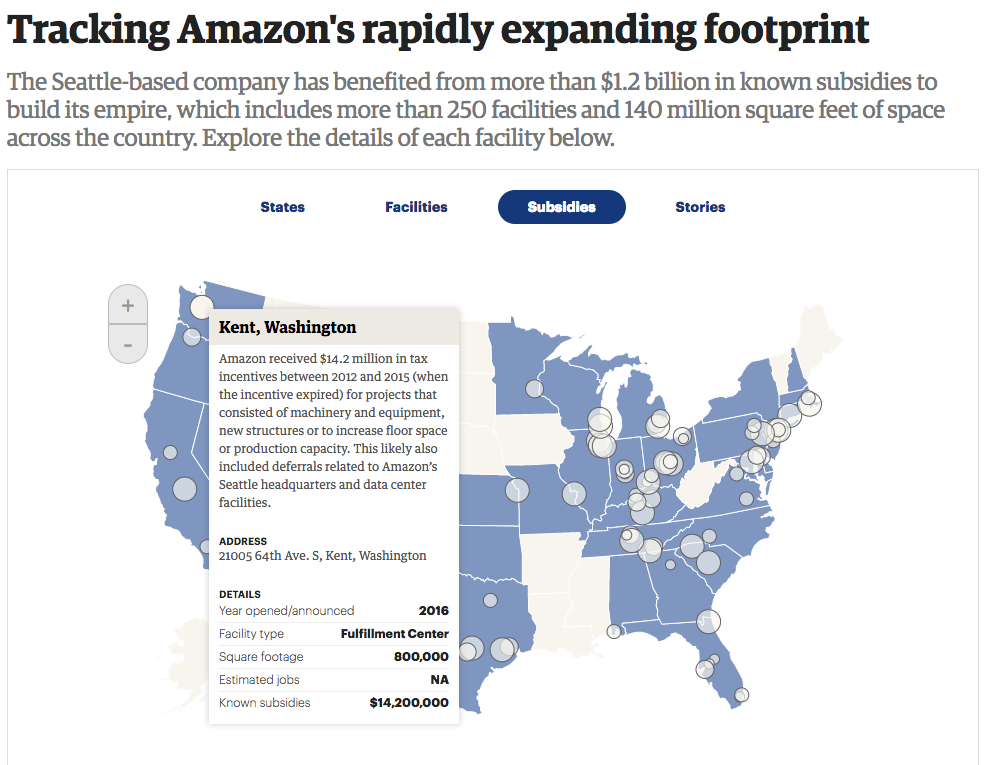 But no matter what you think about all that, here’s one thing that maybe we can all agree on: multi-billion-dollar companies shouldn’t get multi-million-dollar subsidies just for setting up shop.

Where are you coming from on this issue?

Amazon isn’t just any corporate giant — they’re based right here in our state. That’s why we know the company has done some positive things, like creating tens of thousands of good-paying jobs in Seattle, fighting the Trump administration’s travel ban, and implementing a company-wide paid family leave policy that covers warehouse workers and corporate staff too.

It’s also why we’ve worked to hold them accountable, from winning better conditions in their distribution centers, to moving them to stop funding right-wing policy shop ALEC, to standing up for the rights of the security officers who work at the company’s headquarters.

And it’s also why we know there are plenty of people who work at Amazon who are right here with us on all this stuff too.

Thanks for being a part of this,