Moby-Dick; or, The Whale is a novel was written by Herman Melville, it was first published in 1851.

Moby-Dick is considered to be one of the Great American Novels and a treasure of world literature.

The story of Moby-Dick tells of the adventures of wandering sailor Ishmael, and his voyage on the whaleship Pequod, commanded by Captain Ahab.

Ishmael soon learns that Ahab has one purpose on this voyage: to seek out Moby Dick, a ferocious, enigmatic white sperm whale.

In a previous encounter, the whale destroyed Ahab’s boat and bit off his leg, which now drives Ahab to take revenge.

Herman Melville Melville died at his home in New York City early on the morning of September 28, 1891, age 72.

When he died, he was almost completely forgotten. It was not until the “Melville Revival” in the early 20th century that his work won recognition, especially Moby-Dick, which was hailed as one of the literary masterpieces of both American and world literature.

Moby Dick; Or The Whale

Bartleby, the Scrivener – A Story of Wall-Street

Typee, a Narrative of the Marquesas Islands

Pierre; or The Ambiguities

The Confidence-Man: His Masquerade

There have also been several movies created about Moby-Dick

On this day in 1851, Moby-Dick, a novel by Herman Melville about the voyage of the whaling ship Pequod, is published by Harper & Brothers in New York. Moby-Dick is now considered a great classic of American literature and contains one of the most famous opening lines in fiction: “Call me Ishmael.” Initially, though, the book about Captain Ahab and his quest for a giant white whale was a flop.

Herman Melville was born in New York City in 1819 and as a young man spent time in the merchant marines, the U.S. Navy and on a whaling ship in the South Seas. In 1846, he published his first novel, Typee, a romantic adventure based on his experiences in Polynesia. The book was a success and a sequel, Omoo, was published in 1847. Three more novels followed, with mixed critical and commercial results. Melville’s sixth book, Moby-Dick, was first published in October 1851 in London, in three volumes titled The Whale, and then in the U.S. a month later. Melville had promised his publisher an adventure story similar to his popular earlier works, but instead, Moby-Dick was a tragic epic, influenced in part by Melville’s friend and Pittsfield, Massachusetts, neighbor, Nathaniel Hawthorne, whose novels include The Scarlet Letter.

After Moby-Dick‘s disappointing reception, Melville continued to produce novels, short stories (Bartleby) and poetry, but writing wasn’t paying the bills so in 1865 he returned to New York to work as a customs inspector, a job he held for 20 years.

Melville died in 1891, largely forgotten by the literary world. By the 1920s, scholars had rediscovered his work, particularly Moby-Dick, which would eventually become a staple of high school reading lists across the United States. Billy Budd, Melville’s final novel, was published in 1924, 33 years after his death.

7 Tricks to Ensure Your Handbags Will Last for Years

We’re more willing to splurge on a beautiful designer handbag than on any other wardrobe component, justifying our purchase by saying, “Well, this’ll last me for years,” which brings us to today’s subject: learning how to preserve and properly care for these investment items. Luckily, there are a few simple steps you can take to ensure that your precious satchels are kept in mint condition for years to come.

Scroll down to see our tips, and to shop gorgeous investment bags that you’ll want to protect! 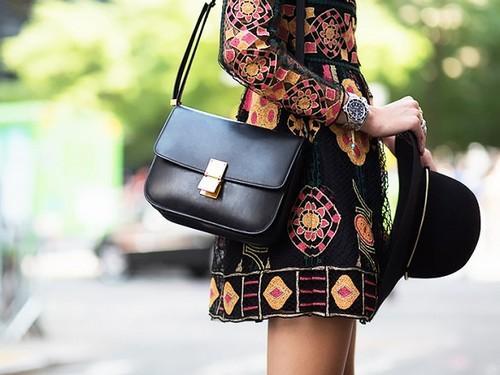 Want to shield your new bag from spills and dirt before they happen? Scotchgard Fabric will do the trick for fabric panels, while Scotchgard Suede and Nubuck is a great water and oil repellant for suede. Both Collonil and Chamberlain’s make great leather-protecting products. Apply product with a clean white cotton cloth, followed by a dry cotton cloth to buff. Use products regularly on heavily used bags. With any products, test a small patch on the bag to make sure it doesn’t cause discoloration. 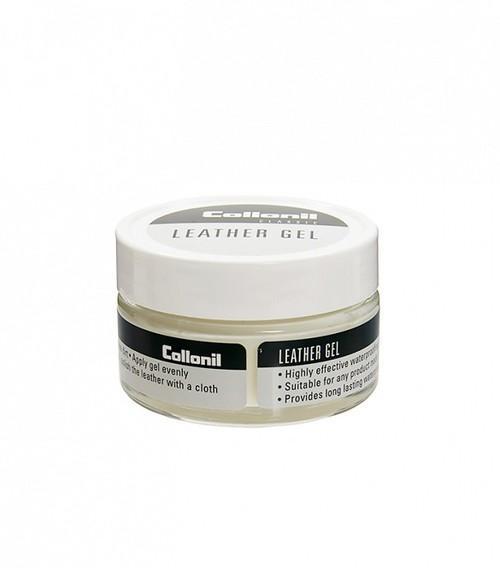 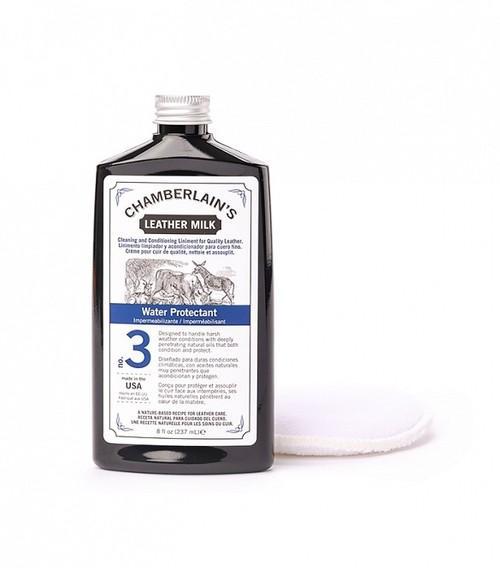 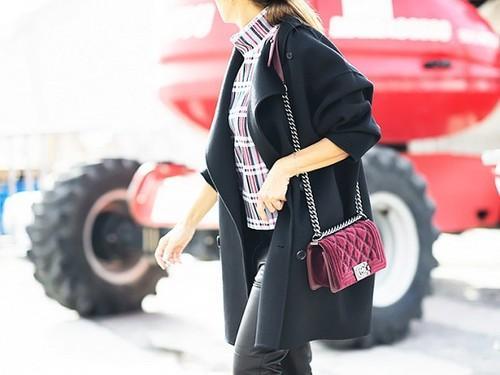 Do your bags get tossed onto a haphazard heap at the bottom of your closet? They’ll last longer if stored the right way, ideally in an upright position in their dust bags or a cotton pillowcase. Never store them in plastic or vinyl, which traps moisture inside. Stuff your bags with scarves, sweaters, or acid-free tissue paper, or use a handbag insert made for this purpose. Cross the handles over each other to avoid wear on the bag and unclip any removable straps for long-term storage.

Related: The ONE Mistake Every Handbag Owner Makes 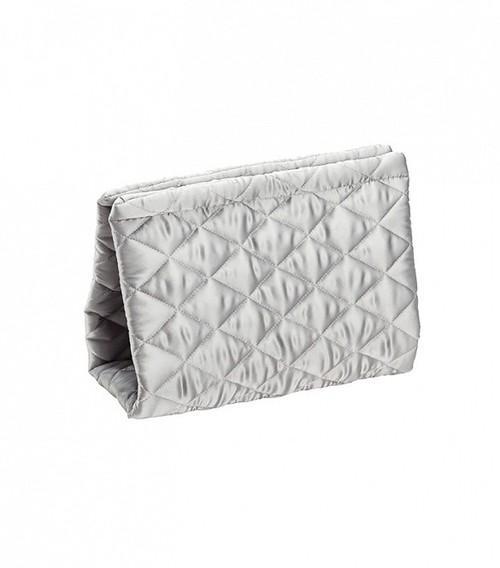 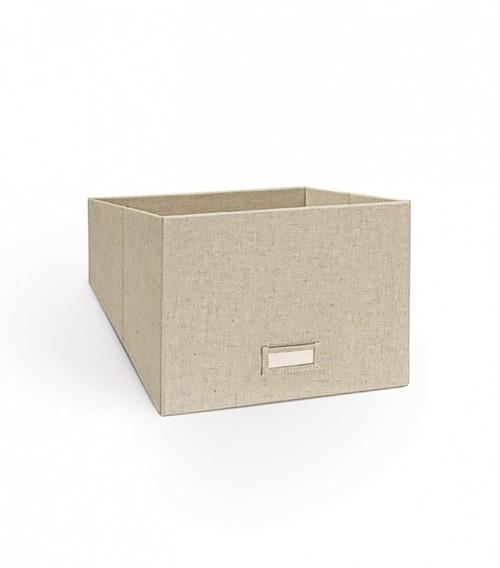 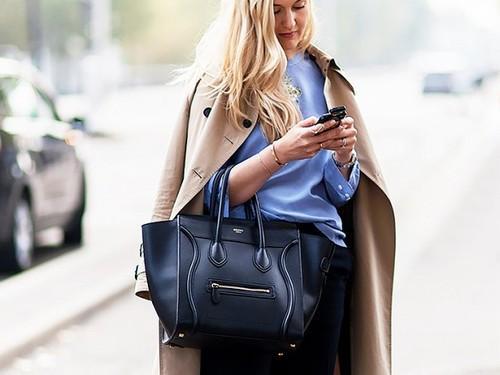 The first step is to know what type of stain you’re dealing with, as that will dictate the removal method. See specific techniques below!

Food stains: Crush white chalk and let it sit on the stain overnight. Brush off with a clean cloth in the morning.

Oil stains: Put cornstarch on the stain immediately, rubbing it in to create heat from friction, which will help the oil absorb. Brush the powder off with a clean cloth after you’ve rubbed it in—don’t let it sit on the stain.

Ink stains: If the stain is fresh, use a white eraser to immediately erase the spot, without applying too much pressure so that the color doesn’t come off. If the ink is already set, you’ll need a professional (see tip #7). An eraser also works for dirt stains.

Water stains: Blot water stains, let them dry naturally, and bring your bag to a professional for removal.

Odor removal: Keep a plastic bag filled with baking soda inside your handbag. Zip the handbag or place it in a larger bag that seals if it doesn’t zip. Keep the baking soda in the bag for one or two days to absorb the odor. Another option? Place a couple of dryer sheets in the bag for a few days. 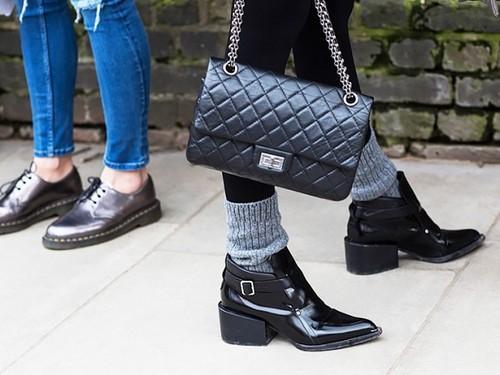 Use pouches to store cosmetics and liquids, which will protect the handbag lining from spills and keep you organized to boot. Avoid click pens at all cost, opting for pens with caps instead. Better yet, put those in your pouch too, in case of dreaded ink leaks. 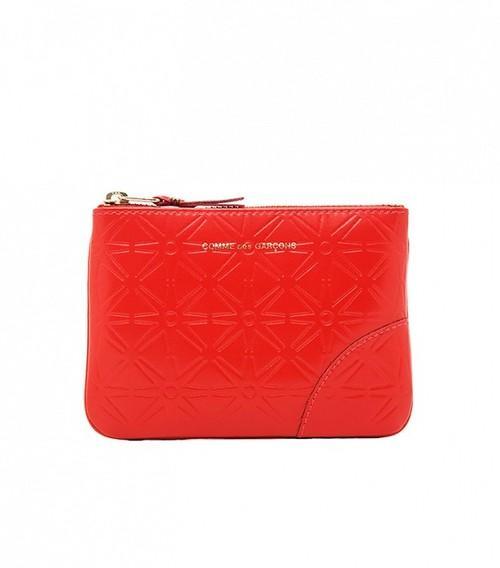 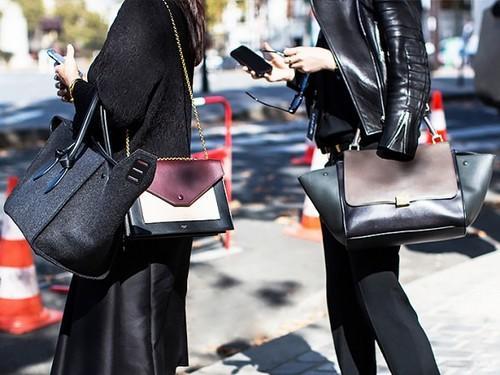 Do your best to keep away jewelry and zippers that could scratch your bag’s metal hardware. A go-to household item, Mr. Clean’s Magic Erasers, do a great job of cleaning up tarnished and grimy hardware.

Related: 14 Items Every Woman Should Have In Her Purse 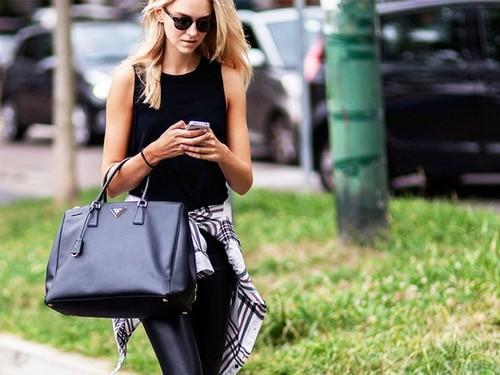 Here are a few best practices when it comes to daily handbag maintenance:

1. Avoid handling your bag if your hands are dirty or have lotion or cream on them.
2. Keep your bag out of direct sunlight.
3. Rotate which handbag you carry regularly so that they don’t wear out too quickly.
4. Use a suede brush to clean and revive suede.
5. Regular use of a leather moisturizer will keep the leather supple and free of cracks.
6. Wipe your bag down on a weekly basis (when in use) with a soft cloth.

7. Take It to a Professional: 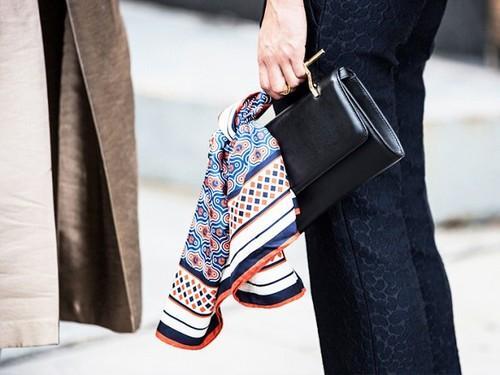 For stains and wear and tear beyond your handbag maintenance skill set, take it to a handbag repair professional. Most shoe repair professionals also work on handbags. They’ll treat it for you, clean it, and restore color as needed. If your bag doesn’t have metal feet on the bottom, it’s wise to have those installed, as they’ll protect it from scratches and dirt. 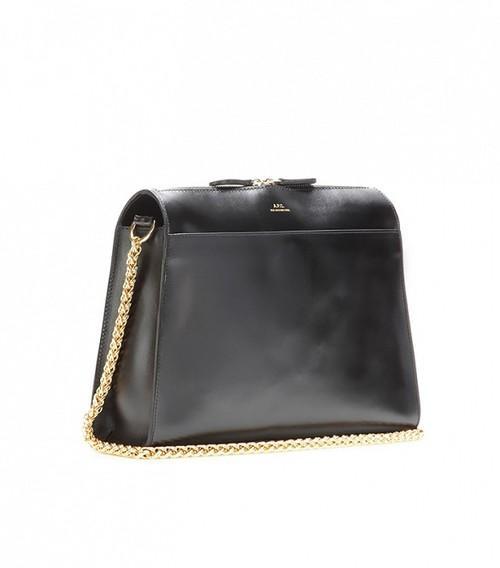 A structured black bag will take you from day to night. Bonus points for sleek gold hardware. 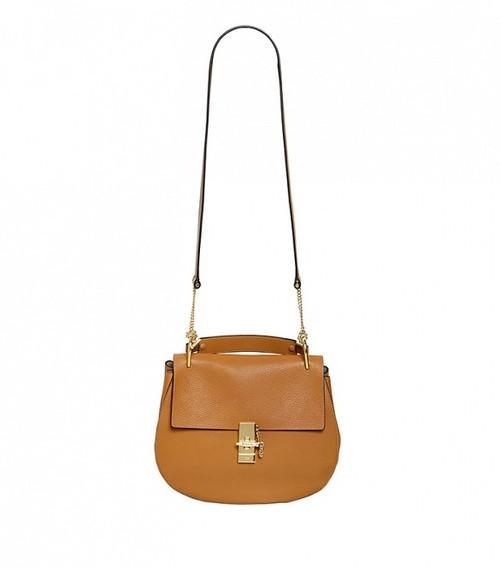 All the cool girls are wearing this It-bag with a cool yet classic vibe.

Related: Is THIS The New It-Bag for Fall? 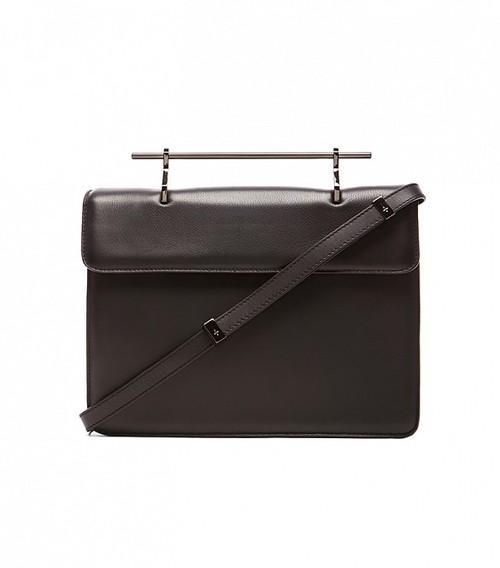 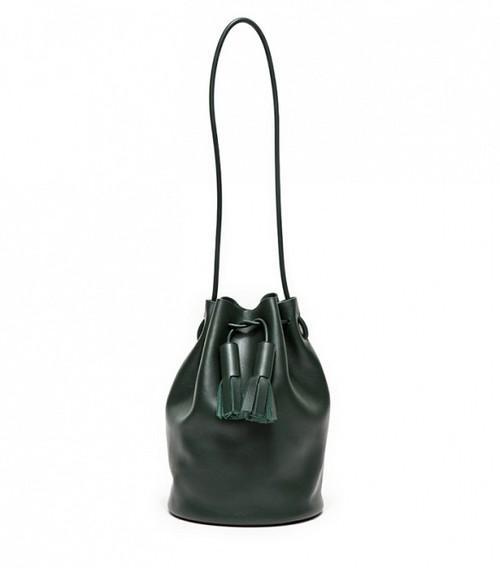 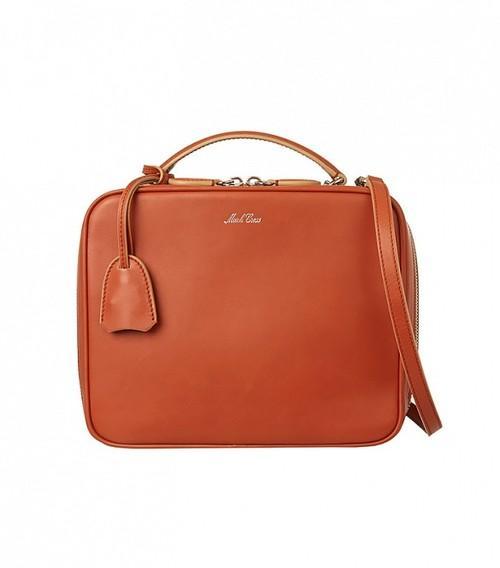 Boxy shapes are in for fall, so tap into the trend with this structured Mark Cross version. 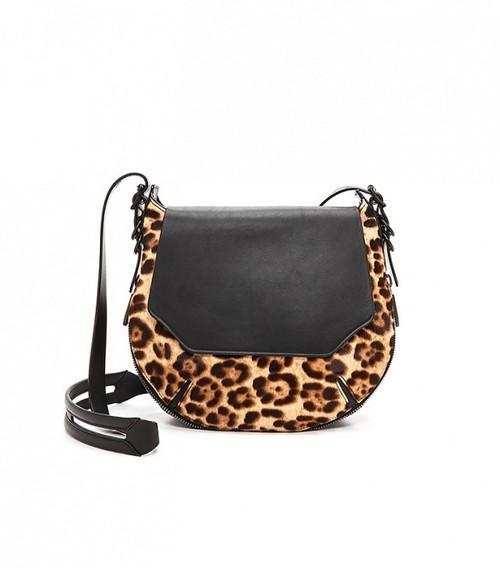 This leopard calf-hair bag makes a subtle statement and gives a luxe feel to any outfit.

June 21, 2018, is the longest day of the year in most time zones in the Northern Hemisphere. Here are 11 facts you might not know about the June solstice.

2. First Solstice of the Year

3. When the Sun Seems to Stand Still

Solstice comes from the Latin words sol, meaning Sun and sistere, meaning to come to a stop or stand still. On the day of the June solstice, the Sun reaches its northernmost position, as seen from the Earth. At that moment, its zenith does not move north or south as during most other days of the year, but it stands still at the Tropic of Cancer. It then reverses its direction and starts moving south again.

The opposite happens during the December solstice. Then, the Sun reaches its southernmost position in the sky – Tropic of Capricorn – stands still, and then reverses its direction towards the north.

Ten Things About the December Solstice

4. It Occurs at the Same Time…

…all over the world. Technically, the June solstice is the exact instant of time when the Sun is directly overhead the Tropic of Cancer. In 2018, this will happen on June 21 at 11:07 UTC.

2018 June solstice in your local time

Even though most people consider June 21 as the date of the June solstice, it can happen anytime between June 20 and June 22. June 22 solstices are rare – the last June 22 solstice in UTC time took place in 1975 and there won’t be another one until 2203.

…depending on who you ask. Astronomers and scientists use the date of the June solstice to mark the beginning of summer in the Northern Hemisphere and winter in the Southern Hemisphere. For meteorologists, on the other hand, summer began almost three weeks ago, on June 1.

How are seasons defined?

In many Northern Hemisphere cultures, the day is traditionally considered to be the mid-point of the summer season. Midsummer celebrations on or around the Northern summer solstice are common in many European countries.

7. The Earth is Farthest from the Sun

Is this timing a coincidence?

The Earth’s distance from the Sun has very little effect over the Seasons on Earth. Instead, it the tilt of Earth’s rotational axis, which is angled at around 23.4 degrees, that creates seasons.

The direction of Earth’s tilt does not change as the Earth orbits the Sun – the two hemispheres point towards the same direction in space at all times. What changes as the Earth orbits around the Sun is the position of the hemispheres in relation to the Sun – the Northern Hemisphere faces towards the Sun during the June solstice, thus experiencing summer. The Southern Hemisphere tilts away from the Sun and therefore enjoys winter during this time.

Why do we have seasons?

8. The Earliest Sunrise of the Year Doesn’t Happen on This Day

Sunrise and Sunset timings in your city

In the Southern Hemisphere, where this day marks the winter solstice, the earliest sunset happens a few days before the solstice, and the latest sunrise occurs a few days after it.

9. Not Usually the Hottest Day of the Year

In fact, the hottest day of the year in the Northern Hemisphere usually comes a few weeks or sometimes months after the solstice. This is because it takes time for the oceans and landmasses to warm up, which again allows for higher air temperatures. This phenomenon is called the delay or lag of the seasons.

10. The Arctic Circle has 24 Hours of Daylight

What causes the Midnight Sun?

11. It’s Celebrated Around the World

The June solstice holds a special place of celebration in many cultures. People around the world celebrate the day with feasts, picnics, dance, and music.