BossFeed Briefing for August 28, 2017. Last Monday, Secretary of the Treasury Steve Mnuchin flew to Kentucky to view the solar eclipse from atop Fort Knox, which holds much of the nation’s gold reserves. This past Friday, a Federal judge lifted the injunction against Seattle’s law providing Uber, Lyft, and other drivers the right to organize. Saturday was Women’s Equality Day, marking the passage of the 19th Amendment to the Constitution, which recognized women’s right to vote in the U.S. And today is the 54th anniversary of Rev. Dr. Martin Luther King, Jr. delivering his famous “I Have a Dream” speech at the March on Washington for Jobs and Freedom. 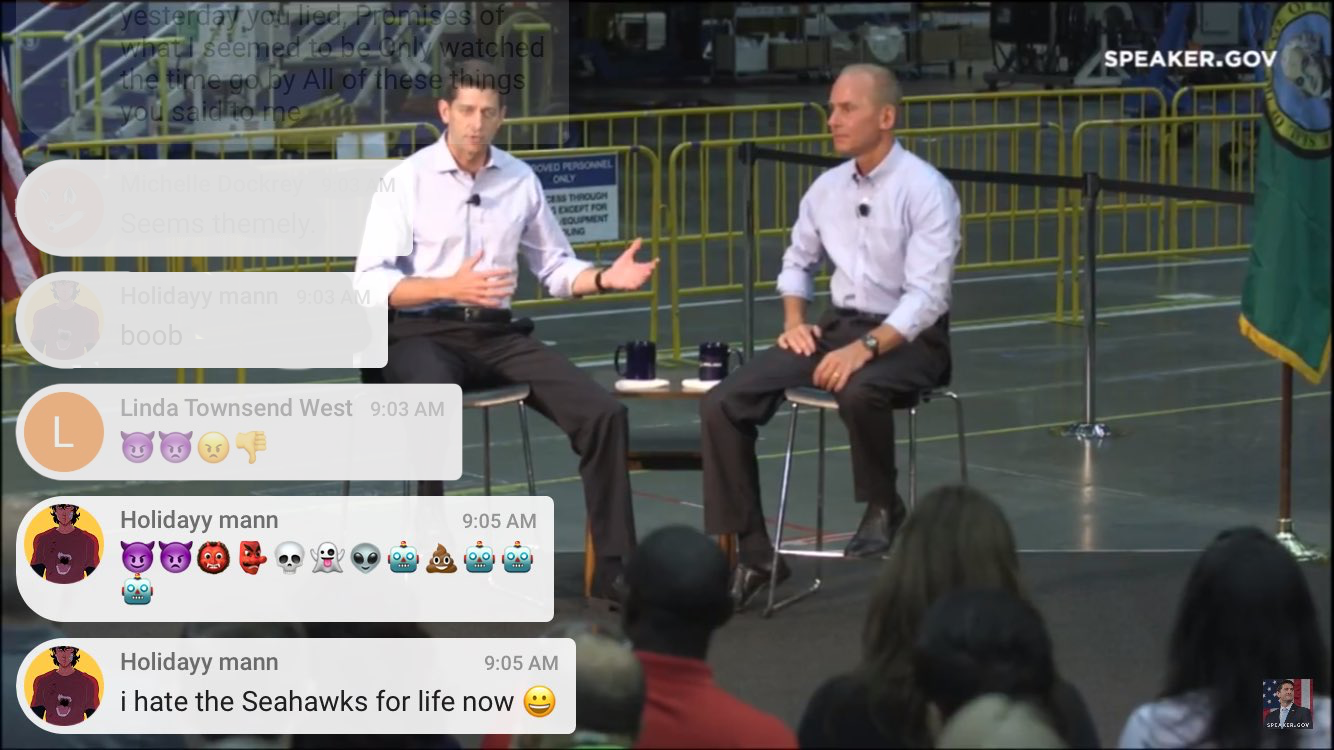 Speaker of the House Paul Ryan came to Everett on Thursday to try and use Boeing workers as a backdrop to sell his latest plan to give billions of dollars of new tax breaks to CEOs & giant corporations. We flooded the livechat with so much feedback, he had to shut it down — but comments are still up, so enjoy!

A new study of British workers suggests that having a bad job could be worse for your health than having no job at all.People working in jobs that offered low pay, unpredictable shifts, and little autonomy had higher levels of chronic stress and a worse health outlook than those who were unemployed.

A woman who worked at a 911 call center is suing over being disciplined and then fired after “experiencing two incidents of sudden onset, heavy menstrual flow.” First she was told she would be fired “if she ever soiled another chair from sudden onset menstrual flow,” and then terminated for failured to practice “high standards of personal hygiene and maintain a clean, neat appearance while on duty.”

Think he’ll write back? Seattle City Councilmember Lisa Herbold wrote an open letter to Amazon CEO Jeff Bezos calling on the multi-billionaire to lead a national conversation on wages and working conditions in the new economy. In her letter, Councilmember Herbold details poor conditions for Amazon Prime Now employees, contracted security workers, and others at the margins of the tech boom.

Is this any way for a burger chain to treat its employees? A former worker at local restaurant chain Blue Moon Burgers has shared his story after going public with a screenshot showing texts between a manager and the chain’s owner that used a racial slur to refer to employees. When the employee raised the issue, the owner told him that if he had an issue, he could leave and not come back.

When online childcare matchmaking app Wondersitter went out of business, the site suddenly shut down and paychecks never arrived, so hundreds of sitters were left unpaid for work they had done, and hundred of parents who had purchased sitting credits in advance were left unable to use money they had already spent. As Catherine Ho explains in an eye-opening look at some lesser-known issues around app-based work for the San Francisco Chronicle, the app matched parents with sitters and collected a percentage of payments up front, but technically the sitters were classified as independent contractors rather than employees. While employees get priority to recover unpaid wages in the event their employer goes bankrupt, the legal rights of independent contractors in these circumstances are less clear.

There’s a proven way to help save children’s lives from gun violence: Remove the possibility for them to get their hands on unlocked, loaded weapons. Twenty-eight states have implemented laws to do just that by requiring gun owners to secure their firearms so children can’t get to an adult’s gun. But we don’t have anything like that here in Washington – yet.

That’s why we’re working hard to pass Dangerous Access Prevention, which requires firearms to be safely stored and holds people accountable if their weapon is used by a child – or prohibited person – to harm themselves or others. It’s a matter of common sense and basic safety. States with laws like these in place for at least one year have seen a 23% drop in unintentional firearm deaths among children younger than 15.

This year, after almost two decades of trying, this policy made it further than it ever has in the legislature. But the gun lobby is determined to stop us, despite support from police, gun owners and medical professionals. That’s why we need your help, Friends.

Thank you so much.

1828 – A patent was issued to Robert Turner for the self-regulating wagon brake.

1833 – The “Factory Act” was passed in England to settle child labor laws.

1842 – The Treaty of Nanking was signed by the British and the Chinese. The treaty ended the first Opium War and gave the island of Hong Kong to Britain.

1885 – The first prizefight under the Marquis of Queensberry Rules was held in Cincinnati, OH. John L. Sullivan defeated Dominick McCaffery in six rounds.

1892 – Pop (Billy) Shriver (Chicago Cubs) caught a ball that was dropped from the top of the Washington Monument in Washington, DC.

1944 – During the continuing celebration of the liberation of France from the Nazis, 15,000 American troops marched down the Champs Elysees in Paris.

1945 – U.S. General Douglas MacArthur left for Japan to officially accept the surrender of the Japanese.

1949 – At the University of Illinois, a nuclear device was used for the first time to treat cancer patients.

1957 – Senator Strom Thurmond of South Carolina set a filibuster record in the U.S. when he spoke for 24 hours and 18 minutes.

1962 – The lower level of the George Washington Bridge opened.

1965 – Gemini 5, carrying astronauts Gordon Cooper and Charles (“Pete”) Conrad, splashed down in the Atlantic Ocean after eight days in space.

1971 – Hank Aaron became the first baseball player in the National League to hit 100 or more runs in each of 11 seasons.

1983 – Two U.S. marines were killed in Lebanon by the militia group Amal when they fired mortar shells at the Beirut airport.

1983 – The anchor of the USS Monitor, from the U.S. Civil War, was retrieved by divers.

1990 – Iraqi President Saddam Hussein, in a television interview, declared that America could not defeat Iraq.

1991 – The Communist Party in the Soviet Union had its bank accounts frozen and activities were suspended because of the Party’s role in the failed coup attempt against Mikhail Gorbachev.

1991 – The republics of Russia and Ukraine signed an agreement to stay in the Soviet Union.

1992 – The U.N. Security Council agreed to send troops to Somalia to guard the shipments of food.

1994 – Mario Lemieux announced that he would be taking a medical leave of absence due to fatigue, an aftereffects of his 1993 radiation treatments. He would sit out the National Hockey Leagues (NHL) 1994-95 season.

2004 – India test-launched a nuclear-capable missile able to carry a one-ton warhead. The weapon had a range of 1,560 miles.