During a recent interview with the Tea Party Express, Mike Rounds talked about the upcoming U.S. Senate Race. With record-low approval ratings for the President and Congress, Rounds discussed his plan for getting

On February 22, 2006, the state legislature of South Dakota passed an act banning all medical abortions except those necessary to save the mother’s life (see double effect). Rounds signed the act on March 6 and the ban was to have taken effect on July 1, 2006, but never did because of a court challenge. A referendum for a potential repeal of H.B. 1215 was placed on the ballot for the November 2006 statewide election due to a successful petition.[12] On May 30, over 38,000 signatures were filed, more than twice the 17,000 required to qualify. The law was ultimately repealed by voters on November 7, 2006, the day of Rounds’ re-election.[13]

As one of the top agriculture producing states in the country, Kansas has long been known as the breadbasket of America. But… read more

I don’t know very much about Pat Roberts but his stance on “family values” struck me … and not in a good way.

If they seize control of the Senate, Republicans will use a powerful but little-known tool to ram through legislation that favors big corporations and the 1% at everyone else’s expense.

I made this video to explain: 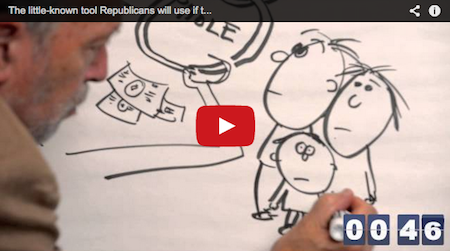 P.S. You can also watch the video on YouTube: http://youtu.be/5SQP2KZflco

So, given the new information re: Gallego statements about Obamacare aka ACA it is very important to read what Pete Gallego is for versus what the republican candidate will do say and vote for on floor of Congress … It is a given, that those running in (redstates) and are from the Democratic Party the issues they support may or may not push back at what the admin does, but having read the wapo story there are things to consider… It’s from wapo and folks in TX may already know that Pete just may be a blue dog and will need to answer to some things that will impact those who need healthcare now and in the future ~~ Nativegirl77

Gallego faces Republican Will Hurd, a former CIA operative, whoever wins will represent the 23rd Congressional District of Texas, a sprawling region that stretches from San Antonio’s western suburbs to the eastern outskirts of El Paso and includes the longest stretch of U.S.-Mexico border in any district. So, for those interested and support immigration would be doing them and their children will be best suited to vote for Gellego and inform him about how good ACA would be for your state as well.

Medicare is one of the most important programs to seniors. More than 3 million Texans rely on Medicare for their health care. Medicare needs to be reformed and strengthened for future generations. But, we cannot make cuts to Medicare benefits that seniors have earned through a lifetime of work. I’ll protect Medicare, and fight efforts by extremists to end it or turn it into a voucher program. Our parents and grandparents should not be given vouchers and forced to negotiate with the insurance industry on their own. To strengthen the solvency of Medicare, I would support allowing Medicare to negotiate prescription drug prices, which would save the program $24 billion annually.

Our country is made up of immigrants who made the journey to the United States in search of the American dream. But we all know that our immigration system is broken. Making sure that our borders are secure is the most important aspect of immigration policy. Reform includes border security and putting the necessary boots on the ground to protect us from those who want to do our country harm. Reform also should include an earned path to legalization for people who stay out of trouble, pay a penalty, pay back taxes, learn English and stand in line. We need to create an immigration system that makes America safer, that is realistic, and that makes economic sense.

I also support the DREAM Act which would let young people who were brought to this country as children, graduated from high school and stayed out of trouble, earn a path to citizenship through military service or by going to college. I was proud to vote for the Texas DREAM Act, and I look forward to voting for the federal DREAM Act in Congress.
Since extremists in Congress obstructed the passage of the DREAM Act, I support the deferred action policy that offers DREAM Act eligible youth, on a case-by-case basis, relief from deportation.

Social Security is a lifeline for many, and it allows our seniors to retire with dignity. Half of America`s seniors would fall below the poverty line without their Social Security checks. I pledge to protect our seniors by protecting the Social Security benefits that they have earned, now and in the future. I would oppose efforts to raise the retirement age, to slash benefits, or to privatize it.  We must strengthen Social Security and make it easier for Americans to save for their retirement through automatic enrollment in retirement programs at their workplaces. Seniors shouldn`t be asked to sacrifice their health after they worked hard and paid into the system their entire lives. That`s way too high a price for people who have built our nation and paid their dues.

The oil and gas industry in Congressional District 23 is a big reason that the U.S. is now a net exporter of crude oil for the first time since the1950s. Making the most of our domestic fossil fuel resources not only creates jobs we sorely need but also moves us toward energy independence from unstable regions. And while we must do the most with the resources we’ve been given, we must also be good stewards of our future and develop green energy to grow the energy-sector jobs of tomorrow. My son’s grandchildren might not have an oil and gas industry to support their economy, and it’s our responsibility develop the energy sources of the future today.

My father was a World War II Veteran. His service helped him go to college, open a small business, and propel our family to the middle class. Lots of folks in our district work as civilians, serve as active duty, or have a family member who does one those things at Laughlin Air Force Base, Lackland Air Force Base, Brooke Army Medical Center and Fort Bliss. We owe a great debt to the men and women who defend and have defended our country. I strongly support local military families and veterans and will work to increase funding for wounded veterans coming home and provide programs so these men and women can find jobs once they get here.