Read more about the Americans with Disabilities Act here.

Yesterday, Hamilton County Prosecutor Joe Deters indicted Cincinnati University Police Officer Ray Tensing on 1st degree murder charges for violently killing 43-year-old Sam DuBose 10 days ago.1 Unfortunately, what’s shocking about this case is not just the vile racism and brutality of Officer Tensing’s actions, but the fact that he was charged and how quickly.

For every 1,000 people killed by police only 1 police officer is ever convicted of a crime.2 And yesterday’s rare indictment is both an important step forward and a painful reminder of the countless other Black families who have lost a loved one to police violence and will likely never have their day in court. While police are murdering Black people with impunity, our national leaders have done little more than offer superficial reforms at best and endorse systemic racism and abusive policing at worst.3 It’s time to hold their feet to the fire.

Next week, Cleveland will host the 1st Republican presidential debate. We’ve purchased 9 billboards right outside the convention center. Will you chip in $20 to cover the costs and make sure the crisis of discriminatory policing is front and center at this debate and beyond? 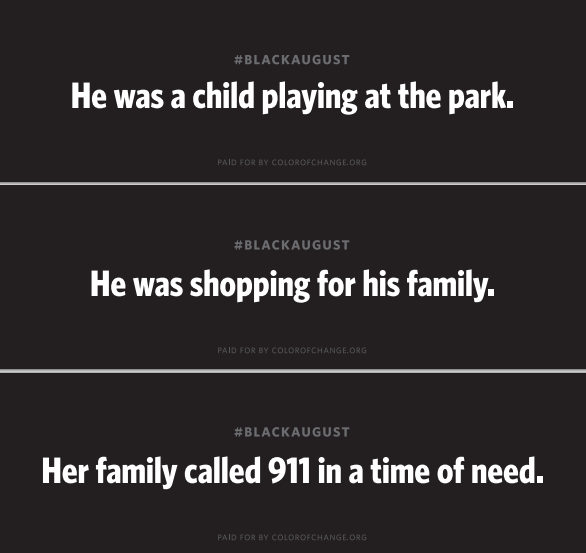 The above images reference the tragic police killings of 12-year-old Tamir Rice, 22-year-old John Crawford, and 37-year-old Tanisha Anderson, respectively.4,5,6 All three were killed by Ohio police in the last year and not one of the abusive and discriminatory police who killed them have faced any criminal charges. In fact, they are all still employed as police officers. And in every single one of these cases it was not the first time these officers had killed or harmed a Black person — and it likely won’t be the last.7

The Department of Justice and local prosecutors that have failed to hold these officers accountable are responsible for the unconscionable loss of Black life we have seen in the past year. Mike Brown, VonDerrit Myers, Eric Garner, Rekia Boyd, Tamir Rice, Tanisha Anderson, Yuvette Henderson, Freddie Gray, Mya Hall, Sandra Bland, Sam DuBose, Kindra Chapman, Ralkina Jones, and Jonathan Sanders, just to name a few. Make no mistake, the challenge before us is centuries old. But the growing awareness around police killings has created a new opportunity to hold our leaders accountable and win the type of transformative change that can finally put an end to this madness.

It’s likely that without these billboards, Republican candidates will ignore systemic racism and discriminatory policing in next week’s debate. That no one will raise the fact that police kill Black Americans at nearly the same rate as Jim Crow era lynchings and more than 175 Black people have been killed by police this year alone.8,9 But we cannot afford to allow this dangerous silence to continue. The billboards around the convention center will honor Tamir, Tanisha and John, while probing debate moderators to ask the questions we need answered:

Does the GOP support responsible body camera policies? Will candidates support a national database documenting police practices? Does the GOP support the federal government continuing to militarize police? How can we expect police to police themselves when one of their own commits a crime? Should cops with a history of racism and abuse still have jobs?We need both parties — Republicans and Democrats — to place the issues of mass incarceration and policing at the center of their policy agendas if we ever hope to see any kind of real change at the federal level.

Billboards in the right location have a great chance of catching the eyes of debate moderators. Click here to hold presidential candidates accountable for addressing discriminatory policing and mass incarceration.

— Rashad, Arisha, Shani, Lyla and the rest of the ColorOfChange.org team
July 30th, 2015

Climate change is wreaking havoc on our planet — and scientists are literally crying in despair. The biggest climate summit of the decade is just four months away. If we can pack the streets at the largest climate march in history we can get our leaders to agree to end fossil fuels for good — join now!

The Senate stands adjourned until 10:00am on Friday, July 31, for a pro forma session only with no business conducted.

Last Floor Action:
1:04:25 P.M. – The Speaker announced that the House do now adjourn pursuant to H. Res. 380, consistent with the fourth clause in section 5 of article I of the Constitution, and notwithstanding section 132 of the Legislative Reorganization Act of 1946.

“Who’s your billionaire?” Now more than ever, any serious presidential candidate needs to have an answer for this question. Over the weekend, we found out who the answer for Senator Marco Rubio is: Norman Braman, a billionaire auto dealer from Miami.

Braman isn’t just supporting Rubio’s White House bid to the expected tune of $10 million; he has been a key figure in Rubio’s professional and personal life for many years. Here is the New York Times report:

As Mr. Rubio has ascended in the ranks of Republican politics, Mr. Braman has emerged as a remarkable and unique patron. He has bankrolled Mr. Rubio’s campaigns. He has financed Mr. Rubio’s legislative agenda. And, at the same time, he has subsidized Mr. Rubio’s personal finances, as the rising politician and his wife grappled with heavy debt and big swings in their income.

To state the obvious: The increasing influence of big money in politics from donors like Norman Braman, the Koch Brothers, and others, drowns out the voices of everyday Americans in the political process. There are a number of ways to combat this threat to democracy; one big target for reformers is to overturn the judicial decisions like Citizens United that have opened the floodgates to unlimited spending on elections. That is a critical fight.

Here is another important way to make it easier for all citizens to have their voices heard: make voting more accessible. One of the most progressive methods for doing that is called Automatic Voter Registration (AVR), a system by which states would integrate information from existing government databases — such as departments of motor vehicles, the Postal Service, revenue agencies, and others — to compile and update the voting rolls with information that they already collect. Oregon just became the first state in the country to implement this type of system, and it expects to add 300,000 people to voter rolls as a result.

Now, a new report from the Center for Popular Democracy outlines some of the transformative impacts AVR would have across the country. If Automatic Voter Registration were adopted in all states, it would potentially result in 55 million new voters added to the rolls.

AVR would result in the registration of currently underrepresented communities as well, including approximately:

While most voting rights news focuses on the concerted efforts by conservatives to suppress the vote, especially among disadvantaged communities, automatic voter registration is gaining momentum. California, which just advanced its own AVR bill late last month, could be the next state to take this important step.

BOTTOM LINE: With our campaign finance laws continuing to loosen, millionaires and billionaires will only increase the amount of influence they exert in our political process. But there are important steps being taken to counter them: policies like automatic voter registration would register millions of voters, raise voter turnout, and make our democracy healthier and more representative of its citizens.