So, Today is a day to close your eyes breathe in through your nose slowly and deeply then release your breath slowly exhale through your mouth… be still stay calm  repeat if needed

It has been a big week and or month for what seems to be a comeback of the tea party, gaining a lot of airtime and most of the interviews have them spewing a conspiracy theory about not only who should get impeached, but how the FBI our government law enforcement is now tainted. I guess this should not surprise anyone but the idea that Republicans in Congress who used to be respected at some point have chosen to ignore the obvious paper trail or digital one and the words coming outta the mouths of respected career service workers just seems too coincidental for me.  I want to know what if any association do these folks have to all things done said acted upon by the trump admin.  In 2013, only 18% of the public identified themselves as members of the tea party, but in this era of trump it seems they are back showing their true colours very loudly but have now transformed into something worse?

We all read how Republicans still believe or want voters to believe and blame any bs happening in this current government on President Obama and as we moved through the impeachment process and Presidential Primaries then the election, kooks who were voted into office now appear more unqualified than ever before and need to be voted out asap what with all the hearings and NOW Covid19, voters are getting another chance to see exactly what they voted for and seriously the democratic party did a great job in selecting members of Congress during midterm2018 …  a tidal wave.

The notion that any republican member of Congress should remain seated in Congress while backing alternative facts and spewing what sounds like foreign propaganda is offensive. The old Tea Party was angry and misinformed but this new group of tea partiers or trumpist is much more willing to ignore the obvious including congressional duties, regular order, norms the rule of law and have seemingly been spitting on Our Constitution on the regular.

It’s tough to believe these people are actually buying that trump is actually governing with the constitution and rule of law in mind. It has got to be something else going on especially since he hasn’t really done anything for his constituents but to them.  Again, just my opinion.   I understand being upset about the politics of it all in general, but the fact is some  were mad that 53% voted an African American into the office POTUS and if you were watching the impeachment debates etc it was clear republicans are still blaming him for whatever they won’t take personal responsibility for while others continue using xenophobia and racism to incite fear, promote exclusion and have crossed the lines of sanity … will folks get it in this era of Covid19

I will say it again, most if not all of the new group of Republican members of congress seem like misinformed trump operatives, others are racists and then there is a small group of misguided individuals. This is just my opinion.  There are quite a few solutions including impeaching trump but registering new voters and getting out the vote is important, remember that the mid-term elections have always been a no big deal vote and that got changed as the #Midterm2018tidalwave switched out republicans in Congress for the democratic party as the fight for the right to vote beat out gerrymandering in the courts, yet the battle continues on. The struggle is real.

Today, 750 million people in the world live without access to clean water. Now, they say 663 million live with access to clean water and 2.4 billion  live without improved sanitation. We all have to know one without the other equals illness disease and death. This crisis disproportionately affects women, who walk a combined 200 million hours a day to collect water for their families. Stella Artois is supporting Water.org to help solve the global water crisis. Learn how you can help at http://BuyALadyADrink.com

Now, in the year 2017, they say 663 million live with access to clean water and 2.4 billion  live without improved sanitation. We all have to know one without the other equals illness disease and death.

During an event in Ferguson where hundreds of people marched for an end to police brutality, police confiscated our Governor Nixon mobile billboard and arrested the truck driver, who was then held in police custody for hours and later released.1 Witnesses say police in an unmarked car targeted the driver and ripped him from the truck before he was even able to undo his seat belt.

It’s a shameful attempt to silence our message and diminish our power, but we won’t be stopped. Now, the “accountability truck” is back on the road and it’s time to redouble our efforts to hold Governor Nixon accountable. In just a few days, a grand jury will decide whether or not Officer Darren Wilson will be held acountable for killing Mike Brown — meaning the time for Gov. Nixon to secure a special prosecutor and protect the right to free speech and peaceful protest is now.

Will you help amplify already growing media and public pressure on Governor Nixon? 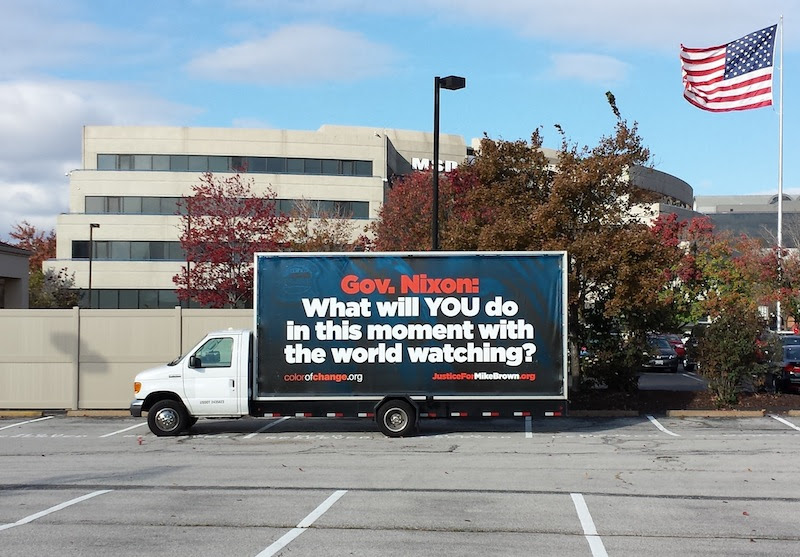 When communities are prevented from speaking out and challenging their country we are no longer in a democracy; we are no longer in America. From the unconstitutional “keep walking” rule that was ultimately shutdown by a federal judge2 to unlawful arrests, tear gas, and rubber bullets,3 Missouri law enforcement have consistently violated the constitutional right to free speech and peaceful demonstration since Officer Wilson killed Mike Brown. The confiscation of the “accountability truck” and arrest of the driver is just another instance of these outrageous and discriminatory intimidation tactics and police abuse, which Governor Nixon must immediately address.

Right now there are military tanks in St. Louis, which suggest police are preparing to crackdown on peaceful protesters after the grand jury verdict is announced.4 Failure by Governor Nixon to take immediate action to keep Black Missourians safe and secure justice for Mike Brown only condones further police brutality and human rights violations. We will not sit idly by as police treat courageous Missourians as enemy combatants.

If enough people take action today, we can show Governor Nixon the cost of his inaction and hold him accountable for securing a special prosecutor and enforcing a higher standard of police conduct across the state.