I wear mine with hope: 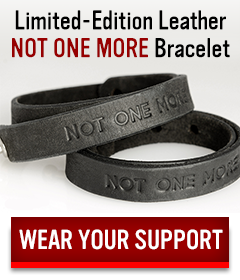 I wear mine with hope:

Please take this opportunity to show your support for this movement by making a donation of $25 to receive this limited-edition bracelet as a gift:

Every gift will be delivered with an acknowledgment card to share the important meaning behind the Not One More call to action.

We all have an important role to play in this movement and I want to thank you for your incredible support. 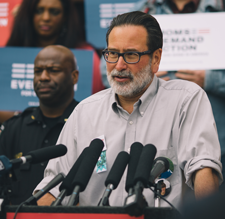 I spent countless hours searching for an experimental treatment that could cure my son’s brain cancer on clinicaltrials.gov. My son died – and now I know that more than 80% of eligible study results aren’t posted, and that’s against the law.

Everyone wants to know what D.J. Tanner and Target are up to. Read on for all the search scoop from this week:

The earth in focus
Wednesday marked the 45th annual Earth Day celebration. People came to search to get more information on the origins of the holiday and learn about ways to conserve—oh, and find out what animal they are, of course. In addition to searches for [earth day slogans] and [earth day worksheets], searchers asked questions like “When was the first Earth Day?”, “How do we stop climate change?” and “Is styrofoam recyclable?”

Just when we were feeling all warm and fuzzy about our planet, we got a reminder that nature can be a little scary as well as awe-inspiring. In Chile, the Calbuco volcano exploded for the first time in more than 40 years, sending clouds of ash into the air and causing thousands to evacuate. There were 100K+ searches for [chile volcano] as people sought to learn more about the eruption.

Prized Pulitzers
Sunday morning, people lined up outside Target stores around the country for the launch of the store’s new Lilly Pulitzer collaboration. But many fans waited in vain, as the affordable line of clothes and home decor sold out within hours both on and offline. Shoppers vented on social media, and searches for Lilly Pulitzer reached an all-time high this month. Meanwhile, persistent types have driven searches for [lilly pulitzer ebay] up 1000% in the last seven days.

But lucky Lilly fans weren’t the only ones thanking the stars for their Pulitzer this week. This year’s Pulitzer prizes were announced on Monday, leading people to the web to learn more about the winners across categories ranging from fiction to investigative reporting to poetry. (And in case you were wondering: Lilly Pulitzer, who died in 2013, was once married to the grandson of Joseph Pulitzer, who established the eponymous Prize.)

Everywhere you look…
…there are reboots. First “DuckTales,” then “The Muppet Show,” and now “Fuller House.” This week Netflix announced a spin-off of the 90s family sitcom “Full House,” to debut in 2016, and 200,000+ searches followed. The new show will feature oldest sister D.J. Tanner (Candace Cameron Bure), and several other stars from the original series are signed on to return, including Jodie Sweetin—the subject of some 50K+ searches this week—and John Stamos. Still, it’s yet to be seen whether the rest of the cast will participate or decide to cut it out. Though searches for Mary-Kate Olsen reached more than 50,000 this week, she and her sister have said that they were surprised by the news. So you might want to wait a bit before saying “TGIF!”

Tip of the week
Keep that good Earth Day momentum going. Just ask Google, “Where can I recycle electronics near me?” for a handy list of places to drop off your old wires and devices.

The Supreme Court Could Extend Marriage Equality To All 50 States

Tomorrow, the Supreme Court will hear oral arguments for the same-sex marriage case Obergefell v. Hodges. The case combines challenges from four states—Ohio, Kentucky, Michigan and Tennessee—that have laws that either ban same-sex marriage, fail to recognize same-sex marriages from other states, or both. The court is widely expected to rule in favor of same sex marriage when it hands down its decision in late June, but just as important as the court’s final decision is the question of how the opinion is drafted.

Think Progress has put together a detailed explanation of four things to watch for in tomorrow’s oral arguments that could influence how LGBT rights continue to be defined after this case is decided.

Meanwhile, as the court of public opinion seems increasingly settled on the issue, LGBT rights are becoming more and more of a problem for Republicans who are tripping over how to satisfy extreme elements in their base and hold on to discriminatory, out-of-date, and unpopular opinions. Ted Cruz, for example, said he strictly opposes gay marriage, but would be comfortable if his daughter were gay. Marco Rubio said he might attend a same-sex wedding, while Scott Walker actually did attend a same-sex wedding reception–but not the wedding itself. (There’s a really simple solution here, guys.)

BOTTOM LINE: The overwhelming positivity surrounding tomorrow’s oral arguments are a reminder of how far we have come on marriage equality in such a short time. But this potentially historic decision is by no means the end of the road for LGBT equality. Even with a Supreme Court decision in favor of marriage equality, same-sex couples in 28 states will be able to legally marry and then be legally fired from their job simply for doing so. We must not forget how much work there is still left to do to ensure that comprehensive non-discrimination laws are put in place to prohibit anti-LGBT discrimination nationwide and provide LGBT people and their families with the same protections currently afforded to other America