We’re getting uncomfortably close to a potentially disastrous event for our Constitution.  As of December 8, 2017, twenty-eight states have “live” applications to Congress to call an Article V convention for the purpose of proposing a Balanced Budget Amendment (BBA). That means that if only six more states apply for such a convention, Congress will be forced to call it.

The danger in calling for such a convention is that based on the precedent of the May 14 Constitutional Convention of 1787, an Article V constitutional convention would have the power to make major changes in the Constitution, or even completely rewrite it, including changing the ratification process to make adoption of the revised constitution easier. This danger is referred to as “a runaway convention.”

However, after 30 years had elapsed with no new BBA Article V convention applications approved, the momentum changed back in favor of applying for such conventions in 2013. Since then, some states that had rescinded their applications have reapplied, and some other states that had never applied, have now applied for the first time. However, 2016-2017 saw a resurgence in rescissions of BBA Article V convention applications, including rescissions in Delware (2016), Maryland (2017), Nevada (2017), and New Mexico (2017). Which brings us up to the present situation of twenty-eight states with “live” applications.

This resurgence of the Article V convention movement since 2013, although slowed down by the four recent rescissions, has been based on the energetic creation of new narratives by Article V convention proponents. However, these new narratives are based on numerous false marketing claims. For a rebuttal of these false marketing claims, we highly recommend that you view “Change It or Obey It? Why the Constitution Is the Solution,” a new 89-minute video presentation by constitutionalist Robert Brown by clicking on the graphic.

Once you’ve seen the video, we also recommend that you click the next graphic on the left and read the article, “Save the Constitution by Rescinding Article V Convention Applications,” for further information on the history of the Article V convention movement, the current status, and the need to rescind all existing Article V convention applications of all types in your state.  A “Model Resolution for a State Legislature to Rescind All Constitutional Convention Applications” is included in the article. 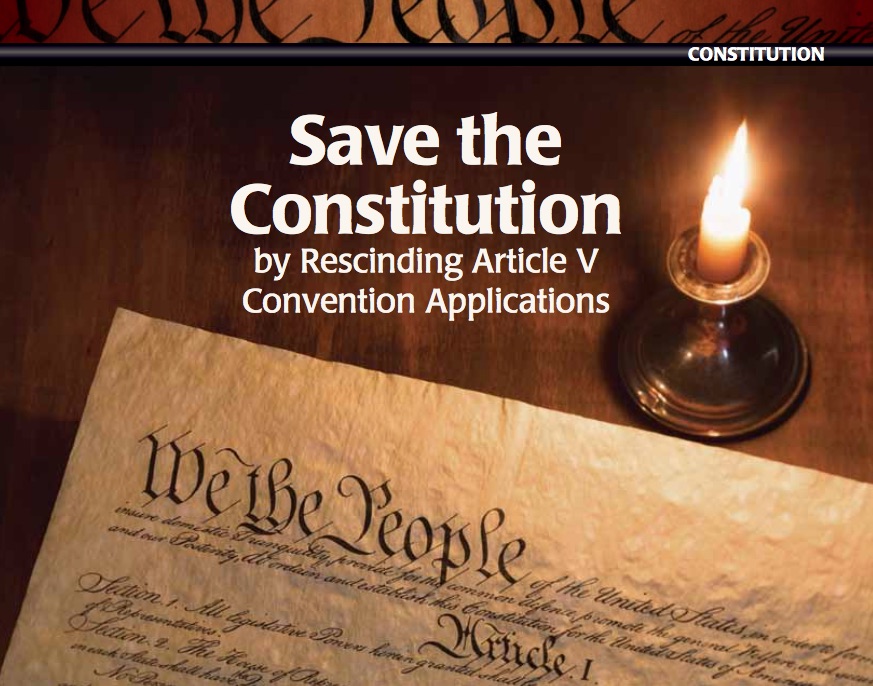 If you live in one of the 28 orange states shown in the BBA Article V Convention Status Map above, then the need is especially great for you to work with other activists and with your state legislators to get a rescission resolution introduced and passed. Remember that for every one of the 28 states that passes a rescission resolution, the BBA Article V convention movement is one state further away from their goal of 34 states.

Click here for the office locations and phone numbers of your state legislators.

yes …them, but don’t get it twisted and don’t let the trump admin fool you we are in need to stay several steps ahead of them …Our constitution and democracy seem to be in danger …