There’s no place for racism in this day and age — especially not in our State Capitol.

Yet on Februrary 26th, at a meeting of the Senate Ways and Means Committee, State Senator Jim Honeyford of Sunnyside said: “The poor are more likely to commit crimes, and colored most likely to be poor.”

Later he doubled down on his offensive language, clarifying “that’s not just the negro.”1

Can you believe it? Not only is this language incredibly offensive, it’s spreading the worst stereotypes about people of color.

And here’s the irony: People of color make up the majority of Jim Honeyford’s district. With attitudes like these, how can he truly understand and fight for the people he’s supposed to represent?

While voters across the state immediately demanded that Honeyford leave office, his Republican leadership remained silent. Not a peep.

Even worse, instead of proving that there is no room for the attitudes of Jim Honeyford in their party, Republicans turned and blocked a vote on the state Voting Rights Act THE VERY NEXT DAY. This simple bill is targeted to address unfair aspects of our elections system — breaking the stereotypes and ignorance perpetuated by people like Jim Honeyford.

Republicans need to understand that it’s 2015, not 1965, and they cannot condone this behavior within their party. 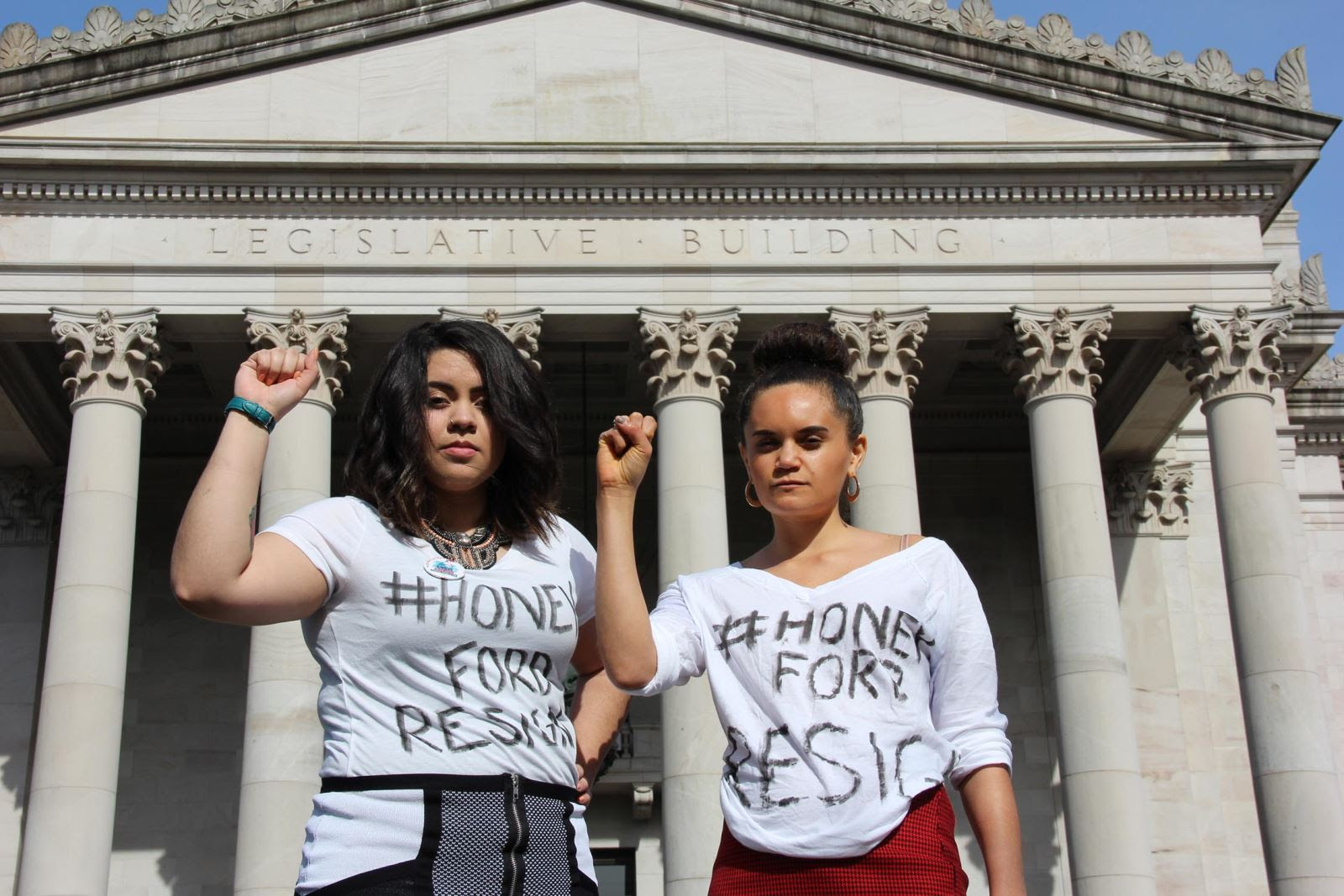 Saturday was the 50th anniversary of the Selma march, where 600 brave souls risked their lives and marched for the right to vote.

While we celebrate how far we’ve come, we are reminded by Republican leaders how far we still have to go.

The Yakima Valley – and our state – deserve better. It’s time to open the door to a new generation of leadership.

Send a message to Senate Republicans. Add your name and tell them to call for Jim Honeyford to resign today.

Principles To Guide The Reauthorization Of Federal Education Policy

In 1965, President Lyndon B. Johnson signed the Elementary and Secondary Education Act (ESEA) into law to ensure all kids, no matter their family’s income level, zip code, or background, receive an education that gives them an opportunity for success. Since then the legislation has gone through changes, but at its core it maintained a federal role in education that focuses on promoting equity and ensuring that disadvantaged students receive the resources needed for a quality education.

The latest version of the ESEA, more commonly known as No Child Left Behind, has been long overdue for reauthorization, and it looks like this year Congress may actually take action. There is no question that NCLB is outdated and broken, but it must be changed in a way that puts students first. In that light, the Center for American Progress has joined with the American Federation of Teachers (AFT) to highlight key principles that should be included in the new version of the law.

Far from outlining a complete set of recommendations for the reauthorization of this critical legislation, these share principles are rather a statement of what good education policy should be in some of the core — and controversial — areas of debate. They are intended to encourage Congress to work together on a bipartisan basis to improve the legislation. And the hope is that, with these shared principles in mind, new federal policy will ensure that all students — and especially those who have traditionally been the most disadvantaged — are prepared to compete in a global economy.

Below is a summary of the shared principles that CAP and AFT have released, and click here to check out the full statement.

BOTTOM LINE: The goal of federal education policy should be to prepare future generations for success and ensure that disadvantaged students have access to the resources they need. With the reauthorization of No Child Left Behind under consideration, now is a critical time to make necessary changes to strengthen our education system. These shared principles should serve as a guide to doing so — our children deserve no less.

Ferguson is back in the news and most of the media whether from the states or overseas describes Ferguson as an “embattled city” has also had some positive changes happen since that DOJ report.

This report not only informed America that a small town has been under control, it has been used as a revenue source and subject to search seizures stops while driving ,shopping, walking for just being black. Ferguson is 67% black 85% cited and those residents make up 93% of all arrests. However, their police department is about 96% white and if you listen to the Mayor or police officials their excuses are that far and few Blacks apply, or are not qualified to be on the force.  The DOJ report in my opinion validated what residents were saying after Mike Brown was killed, some say has been going on for years possibly decades lest we include comments about other “Ferguson’s” all over our country is obviously disturbing. It is now our 21st Century reality that comes from fear, politicians who get votes from fear mongering and a learned behavior culture that should be followed and reformed as the DOJ report suggests even if this scathing report comes from outside authorities. Yet, after watching the press conference, the viewer gets the idea that the information from that DOJ report is devastating, brutal and based on fact though Ferguson officials appear to be acing like they are going to stall or shove immediate changes to the back burner. We all saw Mayor Knowles reaction and it may have been a natural response by folks in leadership or those in positions of power, but the longer they wait to implement change the tougher it will be to hold his title even if folks have been leaving or supposedly fired. This finding by the DOJ was validating and clearly just the beginning as real change will take elections that replace the problem and get those into office that will have the courage to diversify Ferguson. They need leaders that create solutions, take responsibility and  not run or hide from it.  Finding out that some of these people in leadership positions will be paid for a year is offensive. I object to paying people who clearly ignored, avoided, closed their eyes or participated quietly if those emails were sent out in-house only with racial slurs or bias is on the backs of those leaders in the police department.

Anyway, I was checking my email looking at blogs when a blogger exercising their 1st amendment rights seemed to have sparked a response from me and as stated on their blog ~~ feel free to respond and that response is below …

This is just my opinion and quite possibly it has some ill feelings attached, but maybe you should re-read your entry because you constantly state that you only know what is being reported yet you write.

“In my mind’s eye I can almost envision some backward baseball cap vigilante thinking to himself/herself that he or she was taking the appropriate action required to “Take Murica Back.”

I hope folks know that what gets reported can be subjective and while there are several reports from Wednesday are that the shots came from across the street, which they say were almost a block down, behind and away from where the peaceful protestors were. It was also reported that police drew guns within seconds on what seemingly were peaceful protestors even while there was “agitation” prior to the shooting and quite possibly “outside agitators.”  We all need to be reminded that this is also something that has not occurred since August, which could very well mean someone from the outside was at it again and or it could have been a resident. I want to make sure you know believe me anyone who shoots at civilians and or police for no reason are guilty, but you have decided to tell your readers what that looks like and that is just wrong. Why, because we do not know if the shooter/vigilante had a backward baseball cap yet. Unfortunately, this seems to be code for “black male” and if that assumption is wrong, I would definitely stand corrected.  I was taught to know, that not all white folks are bad, racists , wear White Hoods, feel like overseers, slave owners or as if what’s needed is to put absolute control over a community that is over 67% Black 85%cited and 93%arrested fined and has been the police/town revenue …fundraiser since who knows how long

When we were commissioned in the United States Army over forty years ago, pay equality was not an issue. Both of us were paid the same $450 a month paycheck we all received as no time in grade Second Lieutenants.

Pay was published in multiple formats and every soldier knew what America paid its men and women with zero discrimination for the youngest Private or Lieutenant to the oldest Command Sergeant Major or General.

But when our Soldiers leave the Army and enter the civilian workforce, life changes. And it changes more for our female veterans than for our males. Women on average receive about 25% less for equal work than their male counterpart.

We need your help fixing that.

Senator Barbara Mikulski (D-MD), one of our great Senators, introduced S.84 – Paycheck Fairness Act on 23 January, 2013. In short, this act gets after the pay challenge for all American women, and our Veterans. It further goes after bosses who retaliate against employees who reveal their salaries to colleagues in an effort to produce the transparency in the civilian world that works so well in our Armed Forces.

But on multiple votes, the GOP has defeated the passage of this bill.

For that reason, VoteVets requests your support for Senator Mikulski’s Paycheck Fairness Act. Add your name to our petition in support of this important legislation.

Thank you very much for reading. After you’ve sounded off on this issue, please share this email with your family and friends.

We’ll be in touch as the legislation moves forward.