1)the certified organic label is regulated by the USDA and indicates the absence of most conventional fertilizers and chemicals.  A processed product(one that contains more than two ingredients)must have at least 95% organic material

2)The Demeter-certified Bio-dynamic designation means that farmers use practices emphasizing a holistic connection with nature.  The nonprofit has been certifying produce and wine since 1982 and bans harmful chemicals and synthetic fertilizers.

3)Fair Trade products like coffee and chocolate are certified by the Fair Trade Federation, an international group working to relieve poverty.  They ensure that producers receive a fair wage and that production practices promote long-term environmental sustainability and community  development.

4)Green Seal is an independent nonprofit that promotes the manufacture, purchase, and use of environmentally responsible products.  The seal accredited everything from hand soap to hotels.

5)Local generally refers to products grown within a 100-to-150 mile radius. Transporting goods locally uses fewer fossil fuels than shipping them from around the word. buy local

6)Natural means that the product contains no artificial colours or flavors ..not certified or regulated

7)Post-consumer recycled is material that has been sold, used and then recycled.  It is the gold standard for recycled products

8)Sustainable forestry paper products are certified by the forest stewardship council and come from forests that are managed for long-term productivity and biological diversity.

click on the link below for another Wiig video by Yahoo

Funny lady Kristen Wiig stopped by The Tonight Show Starring Jimmy Fallon dressed as Daenerys Targaryen from Game of Thrones. The actress came complete with a fake dragon perched on her shoulder and some fake breasts taped to her chest.

You may not know this…

Producing electricity for the average household in the U.S. each year requires burning 8,079 pounds of coal, and using 5,000 gallons of water. Just for your home.But now you have a choice.
Arcadia Power enables you to power your home, apartment, or business with 100% clean energy in just 5 minutes, eliminating your environmental impact.
When you make the switch, your utility will still continue to deliver electricity through the same power lines, but Arcadia Power will ensure that 100% of your usage is covered by clean wind power. No panels or equipment needed, and you’ll experience the same reliability you’re used to. You just set up an account online, and Arcadia Power gets to work for you by linking up with your current local utility.

Arcadia Power’s mission is to provide everyone with access to clean energy, even if your local utility refuses to stop fracking or burning coal. With customers across the country, Arcadia Power gives you the ability to eliminate your impact, support your values, and even get rewarded by sustainable companies for doing so.
This is a paid advertising message, which helps us bring you great content for free.
ThinkProgress does not evaluate or endorse advertised products or services.
Arcadia Power is even offering an exclusive ThinkProgress discount of $20 off your next electric bill when you choose clean energy today.
So what are you waiting for?

It has been more than two weeks since Baltimore police killed Freddie Gray and no officer has been fired, arrested, or prosecuted. Local officials don’t even have answers to the most basic questions: Why did police violently arrest Gray? Why was this healthy 25-year-old’s voice box crushed, his spleen ruptured and 80% of his spine severed after 45 minutes with Baltimore law enforcement? 1

The lack of accountability for Gray’s killing is unacceptable and the solution to Baltimore’s policing crisis is not martial law or more militarized policing. Right now, we need widespread public pressure to ensure the necessary leadership and independent oversight to bring Gray’s killers to justice and overhaul the Baltimore Police Department. Without independent oversight it’s unlikely that Gray’s killers will be held accountable. Local prosecutors work too closely with police on a day to day basis to hold them accountable — and they almost never do.2

Demand that Governor Hogan appoint Maryland’s Attorney General to assist in the case. 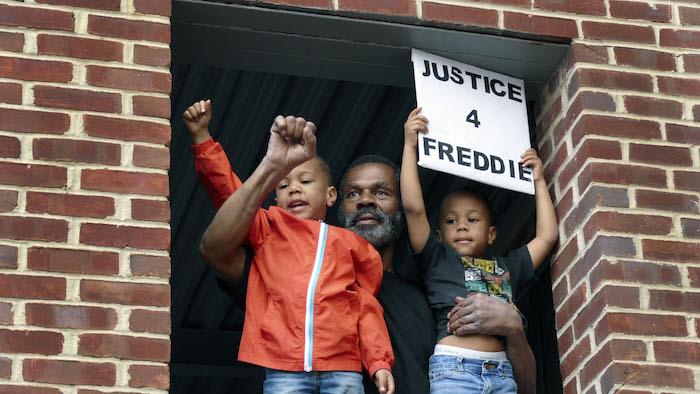 To be Black in Baltimore means every day is a risk. In a city overcome with racism, police violence, and a police union blocking reform,3 even the most simple activities — a walk down the street or the drive to work — could mean an unlawful arrest or deadly attack at the hands of law enforcement. According to an investigation by the Baltimore Sun, in just 5 years, 100 Baltimore residents have won $5.7 million worth of settlements relating to police brutality and civil rights. The stories are shocking, yet almost none of the officers were held accountable:4

Following Freddie Gray’s killing, a community tired of living under siege and facing decades of employment discrimination and decimated public housing is rising up to demand change.5 Last night, as the National Guard moved into Baltimore, images of militarized police tear gassing and beating protestors, fires, and outrage once again flashed across our TV screens. The best way to restore peace to Baltimore is for Governor Hogan and local leadership to undo the structural racism targeting its people. But right now, police are preparing to announce even harsher measures to crack down on the protests — like a curfew for youth6 — that will likely continue to escalate an already unacceptable level of confrontation and violence between police and citizens.

Protestors in Baltimore are showing the same courageous resistance and vision for a better country that we see coming out of Ferguson, Madison, New York, Cleveland, Milwaukee, and other cities across the country. And just as in Ferguson, justice for the brutal police killing of Freddie Gray depends on Governor Hogan’s leadership to do more than ramp up law enforcement.

— Rashad, Matt, Arisha, Lyla, Shani, and the rest of the ColorOfChange team