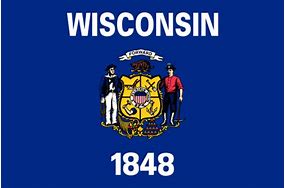 Wisconsin became a U.S. territory following the American Revolution and soon after began attracting settlers looking for work in its mining, lumber and dairy industries. It was admitted to the union as the 30th state in 1848. In the years leading up to the Civil War, Wisconsin was an important stop on the Underground Railroad, with many slaves passing through the state on their way to freedom in Canada. Today, Wisconsin leads the nation in dairy production and is known for the quality of its cheddar cheese–residents even sometimes refer to themselves as “cheeseheads.” Famous Wisconsinites include architect Frank Lloyd Wright, magician Harry Houdini andU.S. Army General Douglas MacArthur.

The last week of May marks the anniversary of the first meeting of the 1787 Constitutional Convention in Philadelphia.  The convention was called to address problems with the Articles of Confederation, which had been drafted in 1777 in order to provide a system for a national government.  By 1779, the Articles had been ratified by all the colonies except Maryland.  Maryland had initially refused to ratify the Articles due to a dispute between the various colonies about claims to the lands west of the colonies.  In 1781, Maryland was finally persuaded to ratify the Articles which then served as the basis for a federal government until 1789.

The Articles of Confederation provided the new emerging country with a name, “The United States of America,” and an unicameral congress.  The Articles, however, had several weaknesses, including an inability to directly raise revenue or enforce economic regulations.  These weaknesses, as well as economic troubles and local uprisings in the 1780s, such as Shay’s Rebellion, contributed to interest in amending the Articles.  The first steps towards amending the Articles were taken at the Annapolis Convention on September 11, 1786.  The Virginia Legislature had called for a convention of all states in Annapolis to discuss interstate commerce issues but when delegates from only five states attended, the delegates decided that such problems could only be dealt with if the Articles of Confederation were revised.  Three days later, on September 14,1786, Alexander Hamilton drafted a report proposing a convention of all states to revise the Articles.  The resolution acknowledged the problems in the current system and proposed a remedy:

That there are important defects in the system of the Federal Government is acknowledged by the Acts of all those States, which have concurred in the present Meeting; That the defects, upon a closer examination, may be found greater and more numerous, than even these acts imply, is at least so far probably, from the embarrassments which characterize the present State of our national affairs, foreign and domestic, as may reasonably be supposed to merit a deliberate and candid discussion, in some mode, which will unite the Sentiments and Councils of all the States. In the choice of the mode, your Commissioners are of opinion, that a Convention of Deputies from the different States, for the special and sole purpose of entering into this investigation, and digesting a plan for supplying such defects as may be discovered to exist, will be entitled to a preference from considerations, which will occur without being particularized.

the appointment of Commissioners, to meet at Philadelphia on the second Monday in May next, to take into consideration the situation of the United States, to devise such further provisions as shall appear to them necessary to render the constitution of the Federal Government adequate to the exigencies of the Union; and to report such an Act for that purpose to the United States in Congress assembled, as when agreed to, by them, and afterwards confirmed by the Legislatures of every State, will effectually provide for the same.

This report was transmitted to Congress and in February 1787 the Congress, following the suggestions of the Annapolis Report called for a convention to begin on May 14, 1787 “to render the constitution … adequate to the exigencies of the Union.”

Though the convention was to begin on May 14th, only eight delegates had arrived in Philadelphia, and it was not until May 25th that a sufficient number of delegates were present to begin proceedings.  The convention began with the election of a president, George Washington; a secretary, William Jackson; and the nomination of a three member committee consisting of Messrs. Wythe, Hamilton and C. Pinckney, which was directed to draft the rules for the convention.  A doorkeeper and messengers were also appointed.

On May 28th, Mr. Wythe presented the proposed rules to the Convention and on May 29th the rules, as amended, were adopted.  Also, on May 29th, Edmund Randolphintroduced the Virginia Plan.  Although introduced by Randolph, the plan was largely the work of another delegate, James Madison.  As the work of the convention was officially to amend the Articles of Confederation, the Virginia Plan began with the phrase “Resolved that the Articles of Confederation ought to be so corrected & enlarged as to accomplish the objects proposed by their institution; namely, “common defence, security of liberty and general welfare.”  The plan suggested, among other things, that the Congress be split into two branches, that a national executive and judiciary be established with the national legislature picking the executive. 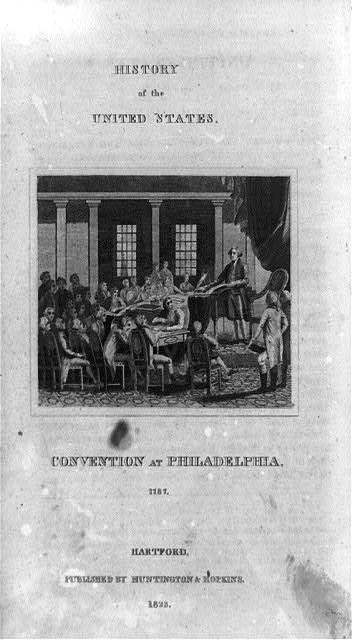 Working rapidly, the outline on a three part system of government consisting of a legislature, executive and judiciary was agreed upon by May 30th.  During the next two months, the Convention put forth and debated the general principles of the government.  On July 26th, the Convention adjourned for 10 days while the five member Committee of Detail drafted a constitution based on the Convention’s work.  Returning to work on August 6th, the Convention spent the next month debating and amending the proposed document.  Then on September 17, 1787, the Convention completed its work and the state delegations unanimously agreed to approve the Constitution.  All but three of the members then signed the Constitution, after debating this step, and Convention President Washington, transmitted the document by letter to Congress.  Since the proceedings of the Convention had been secret, Washington had to explain in his letter why the Convention had drafted a document for the institution of a new system of government rather than proposals to amend the existing Articles of Confederation:

The friends of our country have long seen and desired, that the power of making war, peace, and treaties, that of levying money and regulating commerce, and the correspondent executive and judicial authorities should be fully and effectually vested in the general government of the Union: But the impropriety of delegating such extensive trust to one body of men is evident-Hence results the necessity of a different organization. In all our deliberations on this subject we kept steadily in our view, that which appears to us the greatest interest of every true American, the consolidation of our Union, in which is involved our prosperity, felicity, safety, perhaps our national existence … That it will meet the full and entire approbation of every state is not perhaps to be expected; … we hope and believe; that it may promote the lasting welfare of that country so dear to us all, and secure her freedom and happiness, is our most ardent wish.

Although the proceedings of the convention were kept secret at the time, the Convention’s Secretary, William Jackson, gathered up the journals and related papers and delivered them to George Washington, who in turn delivered the papers to the Department of State in 1796.   In 1818, Congress ordered that the journals be printed.  After the publication of the journals in 1819, the next several decades saw publications of notes of the proceedings by various attendees, including Madison’s, which were published in 1840.  Then in 1911, Max Farrand published a four volume set titled The Records of the Federal Convention of 1787.  This compilation brought together the journals of the convention along with Madison’s notes and the notes of various of the other delegates, including those of Rufus King.  The fourth volume of the set included supplemental materials such as letters from the delegates written during the convention.  Farrand’s Records is considered to be one of the best sources of information about the Constitutional Convention as it brings together in one publication the diverse materials which form the record of the Convention