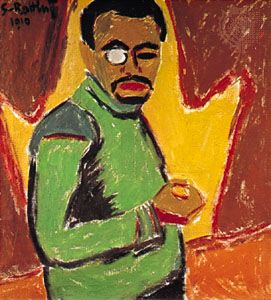 n [now Berlin]), German painter and printmaker who was noted for his Expressionist landscapes and nudes. of this mature work is Self-Portrait with Monocle (1910) below

Self-Portrait with Monocle, oil on canvas by Karl Schmidt-Rottluff, 1910; in the National Gallery, Berlin.Courtesy of the Nationalgalerie, Staatliche Museen zu Berlin – Preussischer Kulturbesitz

In 1905 Schmidt-Rottluff began to study architecture in Dresden, Germany, where he and his friend Erich Heckel met Ernst Ludwig Kirchner and Fritz Bleyl, two other architecture students who shared their passion for painting. Together they formed the organization of Expressionist artists known as Die Brücke (“The Bridge”), united by the goal of creating a modern, intensely emotional style.

The artists of Die Brücke typically preferred to portray scenes of urban life, but Schmidt-Rottluff is particularly known for his rural landscapes. He initially painted in an Impressionist style, but his painting Windy Day (1907) shows the artist’s transition to his mature style, which is characterized by flat areas of boldly dissonant colours. A representative example of this mature work is Self-Portrait with Monocle (1910). Like the other Brücke artists, Schmidt-Rottluff had also begun to explore the expressive potential of the woodcut medium. In 1911 Schmidt-Rottluff, with his fellow Die Brücke members, moved to Berlin, where he painted works with more angular, geometric forms and distorted space, revealing his new interest in Cubism and African sculpture.

After World War I Schmidt-Rottluff became increasingly interested in religious themes, as seen in the woodcut Head of Christ (1918), which is one of a series of prints about the life of Christ. During the 1920s Schmidt-Rottluff’s work became more subdued and harmonious, losing much of its former vigour and integrity. When the Nazis gained power in Germany, he was forbidden to paint. After World War II he taught art and resumed painting, although he never regained the power of his early works.

On the evening of December 1, 1955, Rosa Parks, an African American, was arrested for disobeying an Alabama law requiring black passengers to relinquish seats to white passengers when the bus was full. Blacks also were required to sit at the back of the bus. Her arrest sparked a 381-day boycott of the Montgomery bus system and led to a 1956 Supreme Court decision banning segregation on public transportation.

Quiet Strength: the faith, the hope, and the heart of a woman who changed a nation. Reflections by Rosa Parks with Gregory J. Reed. Grand Rapids, MI: Zondervan Pub. House, 1994. p23.

Rosa Parks: “Why do you push us around?” Officer: “I don’t know but the law is the law and you’re under arrest.”

Quiet Strength: the faith, the hope, and the heart of a woman who changed a nation. Reflections by Rosa Parks with Gregory J. Reed. Grand Rapids, MI: Zondervan Pub. House, 1994. p23.

Rosa McCauley was born on February 4, 1913, in Tuskegee, Alabama. In 1932, she married Raymond Parks and with his encouragement earned a high school diploma. The couple was active in the Montgomery Chapter of the National Association for the Advancement of Colored People (NAACP) External. While working as a seamstress, Mrs. Parks served as chapter secretary and, for a time, as advisor to the NAACP Youth Council. Denied the right to vote on at least two occasions because of her race, Rosa Parks also worked with the Voters League in preparing blacks to register.

Following the Brown v. Board of Education decision, the NAACP choose Rosa Parks to attend a desegregation workshop at the Highlander Folk School External in Monteagle, Tennessee. Reflecting on that experience, Parks recalled, “At Highlander I found out for the first time in my adult life that this could be a unified society…I gained there the strength to persevere in my work for freedom not just for blacks, but for all oppressed people.”

Although her arrest was not planned, Park’s action was consistent with the NAACP’s desire to challenge segregated public transport in the courts. A one-day bus boycott coinciding with Parks’s December 5 court date resulted in an overwhelming African-American boycott of the bus system. Since black people constituted seventy percent of the transit system’s riders, most busses carried few passengers that day.

The success of the boycott mandated sustained action. Religious and political leaders met at the Dexter Avenue Baptist Church and formed the Montgomery Improvement Association (later the Southern Christian Leadership Conference). Dexter’s new pastor, Reverend Martin Luther King Jr., was appointed the group’s leader. For the next year, the Montgomery Improvement Association coordinated the bus boycott and King, an eloquent young preacher, inspired those who refused to ride:

If we are wrong—the Supreme Court of this nation is wrong. If we are wrong—God almighty is wrong! If we are wrong—Jesus of Nazareth was merely a utopian dreamer and never came down to earth. If we are wrong—justice is a lie. And we are determined here in Montgomery to work and fight until justice runs down like water and righteousness like a mighty stream.” 1

During the boycott, King insisted that protestors retain the moral high ground, hinting at his later strategy of nonviolent resistance.

In December 1956 the Supreme Court banned segregation on public transportation and the boycott ended over a year after it had begun. Rosa and Raymond Parks moved to Detroit where, for more than twenty years, the “Mother of the Civil Rights Movement” worked for Congressman John Conyers. In addition to the Rosa Parks Peace Prize (Stockholm, 1994) and the U.S. Medal of Freedom (1996), Rosa Parks has been awarded two-dozen honorary doctorates from universities around the world. 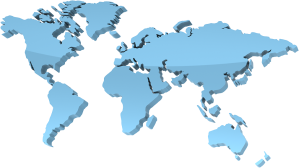 1909 – The Pennsylvania Trust Company, of Carlisle, PA, became the first bank in the in the U.S. to offer a Christmas Club account.

1919 – Lady Astor was sworn in as the first female member of the British Parliament.

1925 – The Locarno Pact finalized the treaties between World War I protagonists.

1934 – Sergei M. Kirov, a collaborator of Joseph Stalin, was assassinated at the Leningrad party headquarters.

1942 – In the U.S., nationwide gasoline rationing went into effect.

1943 – In Teheran, leaders of the United States, the USSR and the United Kingdom met to reaffirm the goal set on October 30, 1943. The previous meeting called for an early establishment of an international organization to maintain peace and security.

1952 – In Denmark, it was announced that the first successful sex-change operation had been performed.

1955 – Rosa Parks, a black seamstress in Montgomery, AL, refused to give up her seat to a white man. Mrs. Parks was arrested marking a milestone in the civil rights movement in the U.S.

1959 – 12 countries, including the U.S. and USSR, signed a treaty that set aside Antarctica as a scientific preserve, which would be free from military activity.

1965 – An airlift of refugees from Cuba to the United States began.

1984 – A remote-controlled Boeing 720 jetliner was deliberately crashed into California’s Mojave Desert to test an anti-flame fuel additive. The test proved to be disappointing.

1986 – U.S. President Ronald Reagan said he would welcome an investigation of the Iran-Contra affair if it were recommended by the Justice Department.

1987 – Construction began on the Channel Tunnel between the United Kingdom and France.

1989 – Dissidents in the Philippine military launched an unsuccessful coup against Corazon Aquino’s government.

1990 – Iraq accepted a U.S. offer to talk about resolving the Persian Gulf crisis.

1991 – Ukrainians voted overwhelmingly for independence from the Soviet Union.

1992 – Russian President Boris Yeltsin survived an impeachment attempt by hard-liners at the opening of the Russian Congress.

1994 – The U.S. Senate gave final congressional approval to the 124-nation General Agreement on Tariffs and Trade.

1998 – Exxon announced that it was buying Mobil for $73.7 billion creating the largest company in the world to date.