1944 Lieutenant Jackie Robinson of the U.S. Army, while riding a civilian bus from Camp Hoo, Texas, refuses to give up his seat to a white man.

He was a lieutenant in the Army of the United States: he saw no reason to sit in the back of the bus

The Court-Martial of Jackie Robinson

ON JULY 6, 1944, Jackie Robinson, a twenty-five-year-old lieutenant, boarded an Army bus at Fort Hood, Texas. Sixteen months later he would be tapped as the man to break baseball’s color barrier, but in 1944 he was one of thousands of blacks thrust into the Jim Crow South during World War II. He was with the light-skinned wife of a fellow black officer, and the two walked half the length of the bus, then sat down, talking amiably. The driver, gazing into his rear-view mirror, saw a black officer seated in the middle of the bus next to a woman who appeared to be white. “Hey, you, sittin’ beside that woman,” he yelled. “Get to the back of the bus.”

Lieutenant Robinson ignored the order. The driver stopped the bus, marched back to where the two passengers were sitting, and demanded that the lieutenant “get to the back of the bus where the colored people belong.” Robinson refused, and so began a series of events that led to his arrest and court-martial and, finally, threatened his entire career.

Jackie Robinson was already a national celebrity in 1944. During a spectacular athletic career a the University of California at Los Angeles, he had starred in basketball, football, track, and baseball. He was drafted in April 1942, and during the following year a study of blacks in the Army singled him out. “Social Intercourse between the races has been discouraged, ” it was reported in Jim Crow Joins Up, “yet Negro athletes such as Joe Louis, the prizefighter, and Jack Robinson, the All-American football star … are today greatly admired in the army.”

Initially, Robinson had been assigned to a cavalry unit at Fort Riley, Kansas, where he applied for Officers’ Candidate School. Official Army policy provided for the training of black officers in integrated facilities; in reality, however, few blacks had yet gained access to OCS. At Fort Riley, Robinson was rejected and told, off the record, that blacks were excluded from OCS because they lacked leadership ability.

For the complete article go to

Black men were lynched for “standing around”, for “annoying white girls”, for failing to call a policeman “mister”. Those are just a few of the horrific stories on display at a new national memorial to lynching victims in Montgomery, Alabama.

One mile away, another historical monument tells a very different tale about the American south: the First White House of the Confederacy celebrates the life of “renowned American patriot” Jefferson Davis, who served as the president of the Confederate states, while making virtually no mention of the hundreds of black people he and his family enslaved.

The contradictions of Montgomery’s historical narratives were on full display this week as thousands of tourists and progressive activists flocked to the city to mark the opening of the country’s first memorial to lynching victims – while some locals quietly seethed, saying they resented the new museum for dredging up the past and feared it would incite anger and backlash within black communities.

“It’s going to cause an uproar and open old wounds,” said Mikki Keenan, a 58-year-old longtime Montgomery resident, who was eating lunch at a southern country-style restaurant a mile from the memorial. Local residents, she said, feel “it’s a waste of money, a waste of space and it’s bringing up bullshit”.

“It keeps putting the emphasis on discrimination and cruelty,” chimed in her friend, who asked not to be named for fear that her child would disapprove of her remarks. The memorial, she added, could spark violence.

The angry and in some cases blatantly racist reactions to the National Memorial for Peace and Justice and accompanying Legacy Museum provided a window into some white Americans’ deep resistance to confronting the nation’s brutal history of racial violence, from slavery to mass incarceration. 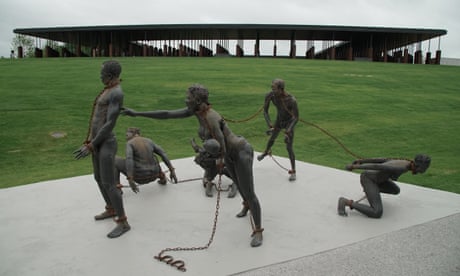 The sadism of white men: why America must atone for its lynchings

While celebrities and civil rights icons lauded the memorial as a powerful symbol of America’s shame and a turning point toward healing, some conservatives in Alabama rolled their eyes at the project, saying they were more concerned with saving Confederate monuments, now under threat from leftwing activists.

Alabama’s Republican governor, Kay Ivey, wasn’t present at the memorial launch, but did release a video promoting her efforts to preserve Confederate monuments a week prior.

Seated at the front porch of the First White House on a sunny morning, curator Bob Wieland said he supported the Legacy Museum, but felt strongly that Confederate landmarks be preserved, especially as the city is changing and the “sleepy old cotton south falls away”. That means, he said, “keeping this museum [the First White House] just to have a positive taste, an old south taste, as the new comes up”.

Asked about criticisms that the state-funded First White House “whitewashes” the evils of slavery, Wieland said, “We could certainly tone down the celebration [of Davis], but … it is part of civil war history.” Discussing the lack of references to slavery, he said the museum was “more of a political military history” than a “social history”.

While some of the most vocal Alabama defenders of Confederate monuments said they broadly backed the concept of a lynching memorial, they also expressed anxiety about its impact, some reverting to racist stereotypes of African American rioters.

“Bring that stuff to light, and let it be there, but don’t dwell on it,” said Tommy Rhodes, a member of the Alabama Sons of Confederate Veterans. “We have moved past it … You don’t want to entice them and feed any fuel to the fire.”

Randall Hughey, another member who also owns a local radio station, emphasized his support of the museum – but also repeatedly questioned the veracity of its facts.

“They have every right to have the memorial, if it’s accurate,” he said, adding that he was perplexed by reports of more than 4,000 lynchings. “That seems pretty incredible to me that there would be that many documented lynchings … That was not the norm.”

Equal Justice Initiative, the group behind the memorial and lynching data, did six years of research and made extensive visits to southern sites.

Mary Massey, a 58-year-old nurse on her way to lunch in Montgomery, expressed disdain at the project: “We didn’t have nothing to do with that. I think they just need to leave it alone. It’s just stirring up something.”

Her husband, Jim, said he supported the memorial as a way to recognize a “horrible” piece of black history, but added: “It’s gone and won’t happen again.” He also said he suspected that for many in Montgomery, the reaction was: “Let sleeping dogs lay.”

Sign up for Guardian Today US edition: the day’s must-reads sent directly to you

Keenan, who is Native American, said she would never visit the memorial and was worried it would exacerbate “racism” in Montgomery: “It ain’t gonna change that. It’s going to get it started more.”

At the opening day of the memorial – which features hanging steel monuments dangling like bodies above the visitors – some black Alabamians said they felt optimistic.

“For so long, society has put a shadow over these things,” said Brittany Willie, a 19-year-old from Huntsville, Alabama, who found an engraving of the name of one of her ancestors. “People are going to see this and realize these people were innocent. They were killed for who they are.”

“This is something our children need to know, so they can understand the struggle,” added Victoria Dunn, a 40-year-old Montgomery resident, who came with her husband.

“This is going to be something embraced by everybody.”

… we have a small favour to ask. More people are reading the Guardian than ever but advertising revenues across the media are falling fast. And unlike many news organisations, we haven’t put up a paywall – we want to keep our journalism as open as we can. So you can see why we need to ask for your help. The Guardian’s independent, investigative journalism takes a lot of time, money and hard work to produce. But we do it because we believe our perspective matters – because it might well be your perspective, too.

I appreciate there not being a paywall: it is more democratic for the media to be available for all and not a commodity to be purchased by a few. I’m happy to make a contribution so others with less means still have access to information.Thomasine, Sweden

If everyone who reads our reporting, who likes it, helps fund it, our future would be much more secure. For as little as $1, you can support the Guardian – and it only takes a minute. Thank you.