Born on May 3, 1898, in Charleston, South Carolina, Septima Poinsette Clark branched out into social action with the NAACP while working as a teacher. As part of the Southern Christian Leadership Conference, she set up citizenship schools that helped many African Americans register to vote. Clark was 89 when she died on December 15, 1987, on South Carolina’s Johns Island.

Septima Poinsette Clark was born on in Charleston, South Carolina, May 3, 1898, the second of eight children. Her father—who had been born a slave—and mother both encouraged her to get an education. Clark attended public school, then worked to earn the money needed to attend the Avery Normal Institute, a private school for African Americans.

Clark qualified as a teacher, but Charleston did not hire African Americans to teach in its public schools. Instead, she became an instructor on South Carolina’s Johns Island in 1916.

In 1919, Clark returned to Charleston to teach at the Avery Institute. She also joined with the National Association for the Advancement of Colored People in trying to get the city to hire African-American teachers. By gathering signatures in favor of the change, Clark helped ensure that the effort was successful.

Clark married Nerie Clark in 1920. Her husband died of kidney failure five years later. She then moved to Columbia, South Carolina, where she continued teaching and also joined the local chapter of the NAACP. Clark worked with the organization—and with Thurgood Marshall—on a 1945 case that sought equal pay for black and white teachers. She described it as her “first effort in a social action challenging the status quo.” Her salary increased threefold when the case was won.

Going back to Charleston in 1947, Clark took up another teaching post, while maintaining her NAACP membership. However, in 1956, South Carolina made it illegal for public employees to belong to civil rights groups. Clark refused to renounce the NAACP and, as a result, lost her job.

Clark was next hired by Tennessee’s Highlander Folk School, an institution that supported integration and the Civil Rights Movement. She had previously participated in and led workshops there during breaks from school (Rosa Parks had attended one of her workshops in 1955).

Clark soon was directing Highlander’s Citizenship School program. These schools helped regular people learn how to instruct others in their communities in basic literacy and math skills. One particular benefit of this teaching was that more people were then able to register to vote (at the time, many states used literacy tests to disenfranchise African Americans).

In 1961, the Southern Christian Leadership Conference took over this education project. Clark then joined the SCLC as its director of education and teaching. Under her leadership, more than 800 citizenship schools were created.

Clark retired from the SCLC in 1970. In 1979, Jimmy Carter honored her with a Living Legacy Award. She received the Order of the Palmetto, South Carolina’s highest civilian honor, in 1982. In 1987, Clark’s second autobiography, Ready from Within: Septima Clark and Civil Rights, won an American Book Award (her first autobiography, Echo in My Soul, had been published in 1962).

Clark was 89 when she died on Johns Island on December 15, 1987. Over her long career of teaching and civil rights activism, she helped many African Americans begin to take control of their lives and discover their full rights as citizens.

We strive for accuracy and fairness. If you see something that doesn’t look right, contact us!

Dr. Martin Luther King, Jr.’s leadership of the American Civil Rights Movement achieved more genuine progress toward racial equality in America than the previous 350 years had produced. He is widely regarded as one of the greatest leaders in world history.

Our country is celebrating his birthday.  Check out these classroom resources, activities, and lesson plans to learn more about him:

Wednesday’s tragic murder of nine black parishioners in Charleston’s Emanuel African Methodist Episcopal Church by a 21-year-old white man wanting “to start a civil war” is weighing heavily on the hearts of all of us. We cannot begin to understand the grief felt by the families of those lost or the Charleston community. But we can speak about what we do know. This was a racist committing a racially motivated murder. This was another tragic example of how guns too easily fall into the hands of dangerous people. This was a terrorist act.

Here is a round-up of the columns and news that we are reading and talking about. We hope they foster and inform your conversations, reflections, and actions too:

1. Jelani Cobb in The New Yorker: Murders in Charleston. “We have, quite likely, found at 110 Calhoun Street, in Charleston, South Carolina, the place where Columbine, Aurora, and Newtown cross with Baltimore, Ferguson, and Sanford.”

2. Ta-Nehisi Coates in The Atlantic: Take Down the Confederate Flag—Now. “Moral cowardice requires choice and action. It demands that its adherents repeatedly look away, that they favor the fanciful over the plain, myth over history, the dream over the real. Here is another choice. Take down the flag. Take it down now.”

3. Jeff Duo in the Washington Post: The legal loophole that allowed Dylann Roof to get a gun. “Dylann Roof, the man accused of a shooting spree that left nine people dead at a historic black church in Charleston on Wednesday night, should not have been able to get a gun.”

4. Jamelle Bouie in Slate: The Black American Holiday Everyone Should Celebrate but Doesn’t. “Juneteenth isn’t just a celebration of emancipation, it’s a celebration of our commitment to make it real.”

5. Jennifer Mascia in The Trace: Charleston Area Faced Gun Violence Spike Before Church Shooting. “Nearly eight out of every 10 killings in the area last year involved a firearm.”

And be sure to check out the latest news and opinions from our partners at ThinkProgress:

1. Judd Legum: NRA Board Member Blames Charleston Victim For His Own Death. Seriously.

2. Ian Millhiser: When John Roberts Said There Isn’t Enough Racism In America To Justify The Voting Rights Act. It’s a sordid business, this divvying up the amount of racism in the United States to decide whether Congress is allowed to enact laws intended to fix it.

3. Jack Jenkins: How The Charleston Shooting Is Linked To The Confederate Flag, According To A South Carolinian. While the Confederate flag is certainly about heritage, it is and always has been about hate.

4. Kiley Kroh: Charleston Victim’s Son Addresses Media On The Baseball Field. “Love is always stronger than hate. So if we just love the way my mom would, then the hate won’t be anywhere close to where the love is.”

Wishing you a safe and peaceful weekend. 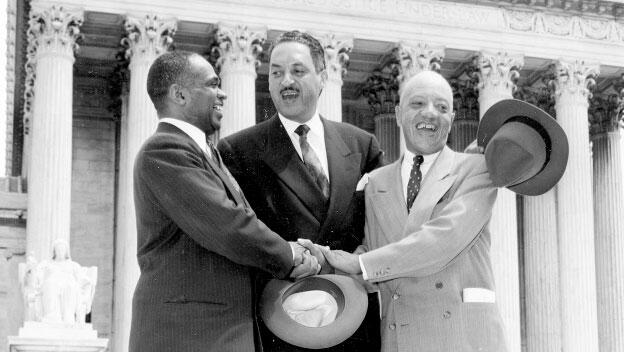