VIDEO: Olympia woman faces fines for sign inside her home

An Olympia woman is being threatened with fines over a sign hanging inside her home.

Shirley Pavao’s homeowners association called a Black Lives Matter sign a violation of the Lost Lake Resort community policy. However, she said she has become a target of a policy that is not legal.

Pavao has until Saturday to remove the sign or be fined.

“This is my living room. This is my Black Lives Matter artwork on my wall,” Pavao told KIRO 7′s Gwen Baumgardner.

The sign has been a point of tension in the rural neighborhood for more than two years.

“There was an outroar in the community. Specific people started complaining, wanted it down,” Pavao said.

The complaints started in the summer of 2020 when she hung the sign in her front window but her HOA board took action.

“The previous board wrote up a new rule limiting what people could have on their homes, the outside of their units, what you could have in your yard, what type of signs, nothing political, so I immediately removed my sign,” Pavao said.

She then placed the sign on her living room wall and that was the end of it until last week. She received another complaint from the board.

She received an email outlining how homes can’t have signs or flags supporting or opposing political candidates, social movements, humanitarian causes or religious beliefs. And it applies to signs outside of the homes, as well as anything displaced from inside a window facing outside that can be seen from the roadway or neighboring units.

“How did the board go from you can’t have outside signs or signs outside your building to determining that they have a legal right to determine what I have in my home?”

She said she feels targeted and pointed to other neighbors who appeared to be in clear violation. At one home, a Trump doormat could be seen on the ground. At another, a thin blue line flag was noticeable.

Pavao plans to appeal the violation and says she is disappointed it has come to this.

“I cannot express how tired I am- intellectually, emotionally. How disappointed I am with some of the people in this park. How much it hurts me that my family does not feel comfortable here, because they are people of color too,” Pavao said.

While Pavao adds that she is frustrated, there are some good neighbors at the park and she still considers it home.

KIRO 7 reached out to the COA to address some of Pavao’s concerns about the policy. However, we have not heard back.

So, if you are able to see the video, it shows there are trump signs on the neighbor’s properties. The question is… is it clearly an act of racial harassment and who is going to help this Woman! The neighbors need to be called out for their double standards

reblogged – what has changed since?

What does placing your signature on the Miranda Waiver Really Mean? 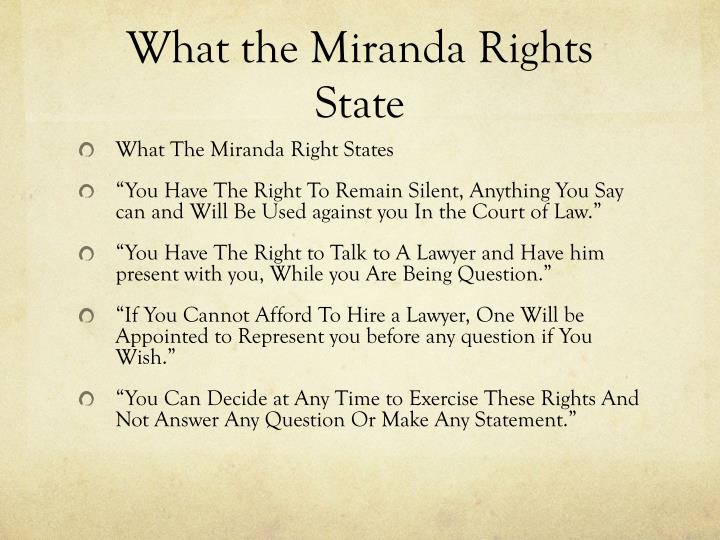 Deaf suspects are asked routinely to sign the Miranda Warning Waiver affirming they waive their rights. What does this mean? For the police and detective this means that the deaf person understands the six statements of the Miranda and read it with comprehension. When they sign their name on the waiver, this means they waiver their rights to remain silent, seek an attorney before questioning and so on. However, the deaf person may sign their name and have a different view. A deaf defendant who may read at the third grade or below may not be able to read the Miranda. They may put their signature on the document simply to appear cooperative. How can the detective determine if the deaf person understands the Miranda Warning? One way is to have a sign language interpreter present. This rarely happens. Typically, police and detectives relay on written communication and lipreading which are rarely effective for deaf defendants whose primary language is American Sign Language (ASL). Two viewpoints–one from the detective or police and one from the deaf defendants. The police and detectives run the risk of having their interrogation and confessions of the defendant thrown out of court or suppressed if they fail to provide for a sign language interpreter. This is not only Federal law but is found in many state statutes as well. What is the answer? More education for detectives and police about the difficulties deaf adults have in comprehending the Miranda.

1864 – During the U.S. Civil War, Union forces led by Gen. Samuel R. Curtis defeated the Confederate forces in Missouri that were under Gen. Stirling Price.

1929 – In the U.S., the Dow Jones Industrial Average plunged starting the stock-market crash that began the Great Depression.

1946 – The United Nations General Assembly convened in New York for the first time.

1956 – NBC broadcasted the first videotape recording. The tape of Jonathan Winters was seen coast to coast in the U.S.

1958 – Russian poet and novelist Boris Pasternak was awarded the Nobel Prize for literature. He was forced to refuse the honor due to negative Soviet reaction. Pasternak won the award for writing “Dr. Zhivago”.

1962 – During the Cuban Missile Crisis, the U.S. naval “quarantine” of Cuba was approved by the Council of the Organization of American States (OAS).

1980 – The resignation of Soviet Premier Alexei N. Kosygin was announced.

1989 – Hungary became an independent republic, after 33 years of Soviet rule.

1993 – Joe Carter (Toronto Blue Jays) became only the second player to end the World Series with a homerun.

2000 – Universal Studios Consumer Products Group (USCPG) and Amblin Entertainment announced an unprecedented and exclusive three-year worldwide merchandising program with Toys “R” Us, Inc. The deal was for the rights to exclusive “E.T. The Extra-Terrestrial” merchandise starting in fall 2001. The film was scheduled for re-release in the spring of 2002.

Approximately 25,000 women demanded the right to vote with a march in New York City, NY.