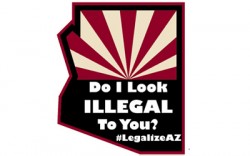 In July 2008, a researcher “looking to dig up dirt on Obama” instead came across a birth announcement from 1961 in the Honolulu Advertiser documenting the birth of then-presidential candidate Barack Obama in the state. The document, together with Obama’s certificate of live birth which showed his birth date, birth city, name, and parenta l information, definitively proved that Obama was born in the United States and is eligible to run for president. Yet, the conspiracy has lived on within the right-wing bowels of the Republican Party for the past couple of years. Most recently, real estate mogul and possible presidential hopeful Donald Trump has taken to the airwaves to challenge the legitimacy of Obama’s presidency. And while Trump claims that he’d rather be talking about how China and OPEC “are going to destroy us,” he has instead distracted the public with his fabricated controversy and used it to drum up right-wing support for his rumored presidential bid. Trump’s birtherism may have propelled him at the forefront of the Republican presidential primary, but it could also cause the credibility of the entire GOP 2012 field to take a steep fall.

RIGHT-WING BUY IN: Since the end of March, Trump has gone from being “really concerned” that “Obama was not born in this country” to insisting that his grandparents essentially lied about his birthplace to collect welfare and other citizenship “assets.” Trump’s colleagues haven’t backed away from his increasingly controversial comments. Instead, they have either tacitly or expressly supported his birther media blitz. Sarah Palin, who once said the “birther” issue is a “distraction” from the important issues, said on Sunday, “I appreciate that the Donald wants to spend his resources on something that so interests him and so many Americans, you know more power to him.” Pizza mogul Herman Cain was one of the first public figures who came to Trump’s defense, stating, “I respect people that believe he should prove his citizenship. He should prove he was born in the United States of America.” Republican National Committee chair Reince Priebus has signaled that the RNC is willing and ready to embrace a Trump candidacy. Meanwhile, the GOP congressional leadership has its own history of tiptoeing around the issue. In the past, House Majority Leader Eric Cantor (R-VA) has refused to call quest ions about President Obama’s citizenship illegitimate and declined to label such rhetoric “crazy,” saying “I don’t think it’s nice to call anyone crazy, ok?” House Speaker John Boehner (R-OH) hasn’t challenged his colleagues’ birther beliefs because, according to him, “it’s not up to me to tell them what to think.”

BIRTHER BILLS: The birther conspiracy has also been rearing its ugly head at the state-level. At least 13 states have had bills introduced that would require future presidential candidates to document their eligibility with birth certificates or other forms of proof that they were born in the United States. Committee actions have blocked such proposals in New Hampshire, Montana, Iowa, Maine, and Tennessee. Yet, in Arizona, the so-called “birther bill” is very much alive. Back in December, Arizona state Senate President Russell Pearce (R) was already bragging about the fact that Obama would have to “show his papers” to enter his state. Last week, the Arizona Senate gave preliminary approval to a bill which would require any presidential candidate to prove to state election officials that he or she was born in the U.S. by presenting a long-form birth certificate, a baptismal or circumcision certificate, a hospital birth record, a postpartum medical record, or an early census record. Trump was involved. Arizona state Rep. Carl Seel (R) scored a meeting with Trump and indicated that “Mr. Trump is very supportive of my bill to just simply require anyone running for president, or, in the case of Arizona, anyone running for any office, to show that they’re lawfully qualified to run.” Last Thursday, the Oklahoma House of Representatives also approved similar legislation. “A lot of people are classifying this as a birther bill which I don’t think it is,” said state Sen. Ralph Shortey (R). “The concern has stemmed from the questions that have arisen from President Obama.” The evidence that Obama has provided so far would not meet the eligibility requirements of Shorte y’s bill and would block him from appearing on the Oklahoma ballot. As David Corn of Mother Jones points out, these proposals are all “part of a well-orchestrated campaign to deny Obama reelection.” Despite their limited legislative success, the birther conspiracy theory isn’t passing legal muster in the courts. In Hawaii, an appeals court upheld the dismissal of a California man’s lawsuit which sought to inspect and review President Oba­ma’s birth certificate.

DOUBLE-EDGED SWORD: Several conservatives have traditionally been wary of promoting birtherism just to pander to the right. In 2009, conservative talk show host Michael Medved called the movement’s leaders “crazy, nutburger, demagogue, money-hungry, exploitative, irresponsible, filthy conservative imposters” who are “the worst enemy of the conservative movement.” “It makes us look weird. It makes us look crazy. It makes us look demented. It makes us look sick, troubled, and not suitable for civilized company,” declared Medved. Former Minnesota Governor and presidential hopeful Tim Pawlenty (R) has dismissed birtherism entirely, stating, “I, for one, do not believe that we should be raising that issue. … I think President Obama was born in the United States.” Karl Rove tried to distance the rest of the GOP from the issue, saying, “The right-wing base of the Republican party, I’m part of that right-wing base, is not in love with the issue of birthers. I mean, there is an element inside the Republican party, and outside the Republican party, that’s fallen in love with this but the majority of Republicans and the vast majority of Americans accept that he is a U.S. citizen capable of being president.” Rove is only partly right. While only 11 percent of the general public believes Obama was definitely not born in the United States, more than half of all GOP primary voters are convinced he is not a U.S.-born citizen. White House senior adviser David Plouffe dismissed Trump’s birther beliefs on Sunday, stating “I saw Donald Trump kind of rising in the polls. Given his behavior, and the spectacle of the last couple of weeks, I hope he keeps on rising. … There’s zero chance that Donald Trump would ever be hired by the American people to do this job.” “If I were them, I’d be really careful riding that birther horse too much,” weighed in former President Bill Clinton. “Everyone knows it’s ludicrous.” Others say it’s just downright racist.

now look at what we have! sigh