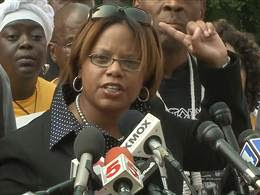 (1) Did you know: It was actually on July 2, 1776, that America gained its independence. So why do we celebrate on July 4?
Keep clicking to find out from Kenneth C. Davis, author of the “Don’t Know Much About” book series.

( 2) “The fact is,  John Adams wrote home to Abigail on the 3rd that this day, July 2nd will go down in history,” Davis explained on “CBS This Morning,” “We’ll celebrate it with parades and pomp and bells ringing and fireworks. And it was because Congress actually ruled it in favor of independence on July 2. But it was two days later, of course, that Congress then accepted Jefferson’s declaration, explaining the vote two days before that really got fixed in America’s imagination as our birthday. July 2nd should be Independence Day.”
(3)Thomas Jefferson drafted the Declaration of Independence on a “laptop,” a kind of writing desk that could fit on one’s lap.
(4) Did you know Thomas Jefferson changed the wording of the Declaration of Independence from “the pursuit of property” to “the pursuit of happiness”?
“Jefferson did not come up with these words out of thin air,” Davis said on “CBS This Morning.” “These were words and ideas that had been floating around for a very long time. Other people had written about things like ‘the pursuit of property.’ Jefferson, I think can say we say happily changed that to the ‘pursuit of happiness’.”

(5) John Adams and Thomas Jefferson both died on July 4, 1826. Davis explained, “That may be the most extraordinary coincidence in all of history. On the 50th anniversary of the adoption of the declaration…the two giants of the declaration both died. … Jefferson died first. Adams was alive, of course, in Massachusetts. He didn’t know that Jefferson had died but said, famously, perhaps apocryphally, that ‘Jefferson still lives.’ And people took that to mean his words will live forever.”

(6) The Liberty had nothing to do with July 4th. It wasn’t called the “Liberty Bell” until the 1830s and that’s also when it got its famous crack.

(7) Only two men signed the Declaration of Independence on July 4th, 1776 — John Hancock (not the big signature!) and Charles Thompson, secretary of the Congress.

(8) Jefferson’s original draft was lost and the one eventually signed is the “engrossed” document and is kept at the National Archives.

(9) The printed version of the Declaration was called the Dunlap Broadside – 200 were made but only 27 are accounted for. One of these was found on the back of the picture frame at a tag sale and sold at auction for $8.14 million to television producer Norman Lear. It now travels the country to be displayed to the public.

by FatherNathan Monk
Petition Organizer
www.change.org
For the first time in recent memory, parts of Florida will be under a state of emergency due to winter weather. Beginning tomorrow, temperatures will drop as freezing rain and sleet move in, roadways will become icy, and snowfall is expected. All of this will happen on top of already wet ground, due to rain happening throughout the day today.

However, city officials are refusing to examine an ordinance they passed last year making it illegal for the homeless to even use a blanket to cover themselves. Last week at the regular council meeting, the council members were requested by members of the public and another council person, to review the ordinance and vote in a more humane way. They refused.

Two years ago, when the city council first considered these ordinances at the request of the mayor, and hundreds of people showed up in protest, the city refused to listen citing, “The silent majority.” that wasn’t present as their reason for moving forward on the ordinance.

As this extreme freeze comes into the panhandle, it will be illegal for the homeless to seek shelter from the cold. This is unconscionable and our city leaders have refused to respond to reasonable requests for them to accommodate the homeless in any way. I am asking for everyone on my page to take the time to share this post, write the mayor and council, and forward this to your favorite media outlet.

The city may not listen to us, but hopefully they will listen if people around the world let them know how Pensacola will be viewed if they do not overturn this inhumane ordinance.

Mayor Hayward Newsletter
Last year, in an effort to protect the aesthetics, public health, and safety of our community, the City Council adopted an ordinance which prohibits camping on public property. Next week, the Council will consider amending that ordinance to remove the prohibition on the use of cover while sleeping outdoors.