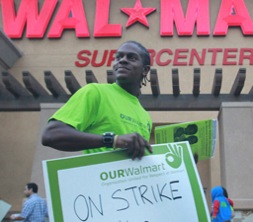 Demand that Walmart’s Board meet with workers and improve working conditions:

Retail workers at Walmart stores nationwide recently went on strike — for the first time in the megastore’s 50-year history.1

Unless Walmart takes immediate steps to improve basic working conditions, workers throughout the company’s vast operations — from factories and warehouses to retail stores — will participate in a massive walkout on Friday, November 23. “Black Friday” is traditionally the most important shopping day of the year for retailers, comprising upwards of 20-40% of their annual sales.2

Black workers comprise nearly 20% of Walmart’s workforce. By supporting Walmart workers in the fight for good jobs and a decent working environment, we can help raise the standard for the entire retail industry and show Walmart executives that there’s a price to pay for exploiting its workforce.

Walmart is the largest retailer in the world and claims to be the largest employer of Black workers in the United States.3 With Black unemployment at 14.3%,4 many in our communities are increasingly reliant upon Walmart for employment — particularly where the retail giant has actively worked to price out smaller competitors.

Yet landing a job at Walmart is hardly a guarantee of a steady paycheck. More often, Walmart jobs serve to keep members of our community in poverty. Wages averaging $8.81/hour add up to just $15,576/year for a full-time employee.5 And even this level of remuneration is out of reach for many — Walmart routinely keeps workers from getting enough hours during the week, and arbitrarily switches up available hours to prevent workers from seeking supplemental employment elsewhere.6 It’s no accident that Walmart consistently has the largest number of employees who rely on public assistance.7

For over a year now, workers have been calling on Walmart to reform the company’s notoriously exploitative practices with regard to wages, scheduling, benefits and workplace safety. Walmart’s response has been ruthless. Workers brave enough to speak up have been slapped with retaliatory disciplinary actions including cutbacks on hours and even firings, while the company and Walton family continue rake in massive profits off the backs millions of low-wage workers.8

Privately-held Walmart has made the Waltons extraordinarily wealthy — this one family controls a fortune equal to the wealth of the bottom 42% of Americans combined.9 Yet the Waltons have refused to take even the most modest steps to address the yawning inequality driven by Walmart’s labor practices. Walmart could take action today to raise wages to $12/hour10 — substantially improving the lives of its lowest-paid hourly workers, 72% of whom are women11 — if there were political will to end the company’s culture of worker abuse.

What happens at Walmart has ramifications far beyond the walls of any of its stores. To date, Walmart has set the standard for driving down wages and maximizing profits. Instituting positive change at Walmart could effectively transform the retail industry and improve working conditions for millions of Americans.

Please join us to demand that Walmart’s Board meet with workers, and take immediate steps to implement fair pay and working conditions. And when you do, please ask your friends and family to do the same.

4. “Employment status of the civilian population by race, sex, and age,” Bureau of Labor Statistics, 11-02-12
http://www.bls.gov/news.release/empsit.t02.htm

9. “Walmart Worker Speaks Out: Raise the Minimum Wage to Get My Vote,” Huffington Post, 08-03-12
http://www.huffingtonpost.com/marcus-edgerson/walmart-worker-speaks-out_b_1734556.html

11. “Everyday Discrimination: Why the Wal-Mart sex-bias lawsuit is the most important case the Supreme Court will hear this year,” Slate, 03-28-11
http://www.slate.com/articles/news_and_politics/jurisprudence/2011/03/everyday_discrimination.html