Right now there are millions of women across the United States who are making 77 cents for every dollar their male colleagues make. That’s right, in today’s modern world, women still get paid less than men for exactly the same job!
How wrong is that!? The GOP had the chance to correct this injustice by passing the Paycheck Fairness Act, but they refused. Don’t they have mothers, daughters and sisters who this bill would help? Or are they too deep into the pockets of their special interest allies to care?
Either way, the time is now to pass this bill, to ensure women get paid the same as their male counterparts. We need 100,000 of our supporters to sign on and tell the GOP to pass the Paycheck Fairness Act NOW!

Republicans try to talk a big game about equal pay for equal work, but in reality, they’ve continuously done the wrong thing. They’ve stood in the way of progress, allowing this blatant sexism to occur in the workplace.

Add your name to join the 100,000 strong standing up for workplace equality.
Thanks for your support,
Stop The Tea Party!

Did you catch MSNBC tonight?

Al Sharpton had a long segment on our Medicaid campaign.

He captured how outrageous it is that Gov. Bobby Jindal is blocking health care for hundreds of thousands of his constituents—while his state tries to force down our billboard criticizing him. 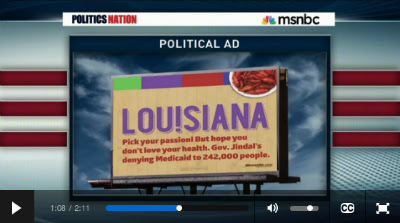 Sure, you might expect to hear a sympathetic take on MSNBC. But this story has earned attention from some unexpected folks too. A high-profile conservative legal scholar, Eugene Volokh, published a sharp piece in The Washington Post today about our standoff with Gov. Jindal’s administration that concluded: “I expect the case to be promptly thrown out of court; and I hope [Lieutenant Governor Jay] Dardenne gets some political grief from voters for trying to suppress criticism this way.”

We’re working night and day to keep the heat on—not just in Louisiana but in all the Republican-led states where millions of Americans are going without the health care they deserve. This fight will continue.

–Victoria, Alejandro, David, Joan, and the rest of the team