A special education teacher in Prince George’s County is being placed on administrative leave after school officials learned Wednesday that he pleaded guilty to overbilling the District for bus rides that his company never provided to students.

Donnie Dukes, who previously worked as a compliance officer in the District and operated a student transportation business, admitted on Wednesday that he charged the city for $300,000 worth of rides that were never given.

Marco Rubio: Medicare, Social Security ‘Weakened Us As People’, Made Us Lazy

Senator Marco Rubio penned an op-ed in Thursday’s Miami Herald called “Why We Must Save Medicare.” In this video, Senator Rubio details that op-ed further and elaborates on his goals for the program.

Healthy eating means getting nutrition from all the right food groups. Focus on fruits, make at least half your grains whole, go lean with protein, and more.

ChooseMyPlate.gov has tips on healthy eating for kids and adults. Before you eat, think about what goes on your plate or in your cup or bowl.

Share this with a friend, family member, or neighbor.

The results are different for everyone

Wouldn’t it be great if our schools had all the money they need and oil companies had to hold a bake sale to fund their tax loopholes?

The response from progressive legislators and activists at the Capitol was incredible. In the end, we raised $247 for the Education Legacy Trust Account, which unfortunately leaves our schools  $58,999,753 short. We could bake a lot more cookies, but it would be easier for the Senate to close the Big Oil tax loophole and devote the funding to our schools. 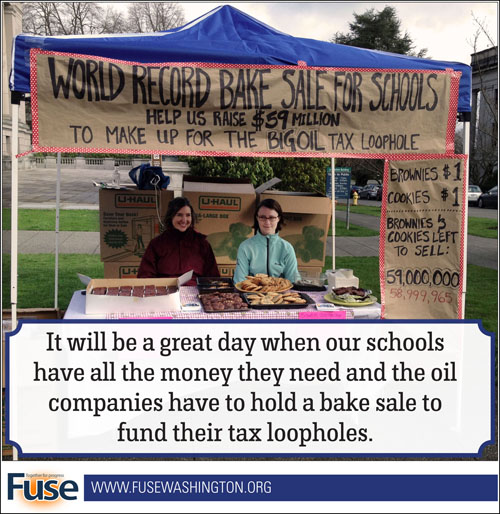 Oil companies like BP and Shell are some of the most profitable in the world. They don’t need our taxpayers dollars. Our kids’ classrooms do. Will you share this graphic to spread the word about closing the Big Oil tax loophole?