That’s how our ad team described MoveOn members’ powerful ad campaign targeting decision makers in Washington, D.C. and state capitals across the country. The ad featured a call for action on gun violence from Richard Martinez, whose son was killed in the recent shooting at UC Santa Barbara.

This ad generated 8.1 million impressions in capital cities across the country in a week, including nearly 1 million in Washington, D.C. While not all of those “impressions” mean that someone watched the entire video, we do know that it was viewed thousands of times by government staffers and more than 600 times by members of the media.

Together, we’re working to make this powerful message unavoidable—to demand action in the face of the continued scourge of gun violence in communities across America. Sadly, in just the past few weeks, there have been multiple mass shootings since UCSB and countless individual gun deaths.

But passionate messages like Mr. Martinez’s can break through. As this video was being shared from coast to coast, MoveOn member and UCSB student Kyley Scarlet started a petition on gun violence to the Obama administration, and Vice President Joe Biden responded with a personal video message for students at the school.1

That’s why, no matter how frustrating this effort can be, we have to keep lifting our voices. If you haven’t already, please share the ad with everyone you know. 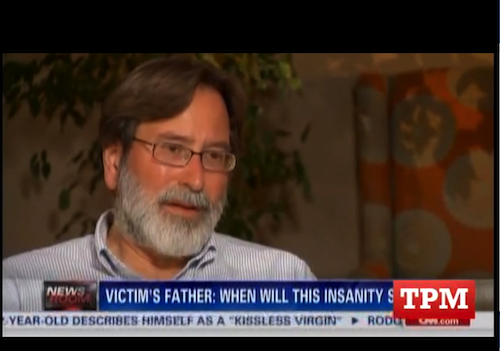 –Garlin, Jo, Nick, Alejandro, and the rest of the team

P.S. Have an idea for reducing gun violence in your community? Start your campaign today.