The facts are in. The science is definitive.

The question is no longer whether climate change is happening, but whether we can afford not to act.

In the western United States, changes in our climate are fueling wildfire seasons that are longer and more intense — putting people, communities, and businesses at risk.

As we’re seeing right now, wildfires unquestionably have devastating impacts on the lives of many Americans. This weekend, California declared a state of emergency as two major wildfires scorched acres of land, threatening towns and forcing many to evacuate. These are just two of the 14 fires that are currently burning throughout the state.

Make no mistake: The cost of inaction on wildfires and climate change is too high a price for Americans to pay, particularly when we have a chance to address this right now.

Watch as President Obama’s Science Advisor Dr. John Holdren breaks down exactly why this is a problem that we must meet head-on — and pass it along to someone who needs to see it.

As a new report from the Council of Economic Advisors points out, the consequences of climate change reach beyond our environment. The impacts of climate change threaten our homes, our health, and our economic prosperity. In fact, delaying action for a decade would increase the cost of responding to climate change by 40 percent.

President Obama has been taking action on all fronts to reduce the harmful greenhouse gas emissions that are warming our planet, to make our communities more resilient to climate impacts, and to take the lead on the international stage. In June, he announced a competition to help Americans build a stronger capacity to protect their homes and neighborhoods from natural disasters.

If the question is, “Do we protect the lives, the economy, and the future of the American people?”, the answer should always be a resounding “yes.”

Check out the President’s action plan to learn more about what we can do to take the lead on addressing global climate change:

John Podesta
Counselor to the President
The White House
@Podesta44

Iowa Rep. Steve King Insults DREAMers Who Confront Him On His Anti-Immigrant Positions

Immigration has been a particularly divisive issue within the Republican Party, but just before leaving the Capital for August recess last week, House Republicans agreed to effectively end the Deferred Action for Childhood Arrivals program, or DACA. The program, started by President Obama, has allowed 580,000 “Dreamers” who came as children to the United States with undocumented parents to get work permits and avoid deportation. It’s one of the vital steps that the Obama administration has taken while Republicans refuse to act on comprehensive immigration reform in Congress.

Now back in their home states and districts, members are having to answer to why they would want to deport young people who grew up in the U.S. and know no other home. An encounter between Rep. Steve King (R-IA) and two DREAMers, Erika Andiola and Cesar Vargas, illustrates just how out of touch these legislators are. The whole thing is captured on video here.

King was at a fundraiser for Sen. Rand Paul in Okoboji, Iowa. In fact, Sen. Rand Paul, who is sharing a meal with King and introduces himself to the DREAMers, bolts with his mouth full when he hears what they want to talk about. (Paul’s aide Sergio Gor explained that the Senator had another media event that he needed to attend.)

Andiola and Vargas, who founded the DREAM Action Coalition to advocate for progressive immigration policy, then confront King. After Andiola offers King the opportunity to rip up her work authorization card through DACA, King notes that she is “very good at English.” Her reply: “I was raised in the United States.” King goes on to say they are breaking the law, even when Vargas informs him that he wanted to serve in the military but was not allowed. Here is an excerpt of the exchange, and head over to ThinkProgress for the full report:

ANDIOLA: I’m actually a DREAMer. I’m originally from Mexico, but I was raised here. I graduated from Arizona State University. I know you want to get rid of DACA. And I wanted to give you the opportunity, if you really want to get rid of DACA, just rip mine. You can go ahead and do that. You take my DACA, you will literally take away everything.

ANDIOLA: I was raised in the United States.

KING: You know what I’m saying. So you can understand the English language. You’re saying something that’s not true. I spoke of drug smugglers… Your ears work too, I was speaking of drug smugglers only.

ANDIOLA: You’re the one who’s trying to get rid of DACA.

KING: And you heard why. I told you why. The president has no constitutional authority to do what he has done.

ANDIOLA: Yes he does. [She turns to Vargas] He’s actually an attorney, he’s a DREAMer. He graduated from law school.

KING: Oh and that makes you an authority. […] You keep your card. I don’t do individual policy. I do national policy for everyone. It troubles me a great deal that you have such disrespect for the laws of the United States of America. You’re telling me that you don’t have to abide by the laws.”

BOTTOM LINE: While Rand Paul might physically run from an interaction with DREAMers, the members of Congress who want to end DACA can’t run from their votes. Rep. Steve King’s comments are just the latest example of the intolerant and backward views that only hurt our society and our economy.

After my son, Christopher Ross Michaels-Martinez, was shot and killed near UC Santa Barbara in May, I pledged to do everything I could to hold elected officials accountable for passing stronger gun laws.

If candidates for federal office want our votes, they have to make their positions clear on common-sense gun laws.

You can help by asking the candidates in your area where they stand on ten key solutions to gun violence in America. All they have to do is fill out the Gun Sense Voter Questionnaire.

Click here to watch my short message about the questionnaire — then ask the candidates in your area to fill out the Gun Sense Voter Questionnaire before the August 15 deadline. 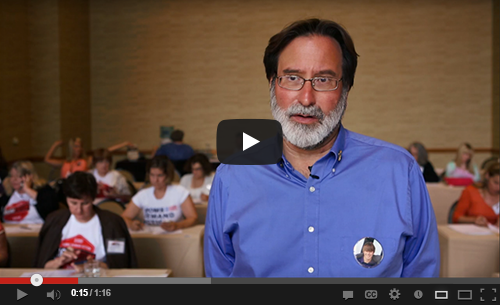 We know where the public stands on common-sense gun laws. More than 90 percent of Americans support background checks on all gun sales.

Once we know where our candidates stand on these issues, we’ll combine that information with their prior statements, votes and co-sponsorships to mobilize Americans to support or oppose them at the ballot box this November and beyond.

But we can’t just assume candidates will respond unless we tell them to.

Click here to ask your candidates to fill out the questionnaire as soon as possible.

Together, we’re going to work to hold elected officials accountable — and it starts with making sure the folks running for office are up front about their positions on gun laws.

Thanks for taking action,

This week, President Obama will welcome 50 African leaders to the nation’s capital, as part of the U.S.-Africa Leaders Summit.

The three-day summit is the largest event that any U.S. president has held with African heads of state, and will build on the President’s trip to Africa in 2013.

National Security Advisor Susan Rice sat down to preview the summit, and explain what this means for both the United States as well as for the African nations attending this historic event.

Watch Susan Rice preview the summit, and find out more about this historic event.

In this week’s address, the President discussed the new monthly jobs report and the fact that our economy created over 200,000 new jobs in July for the sixth straight month — the longest streak since 1997. To ensure this momentum can be sustained, the President is pressing Congress to act to create jobs and expand opportunity from raising the minimum wage, to helping people pay back their student loans, to fair pay and paid leave.

Last month, Dr. Jill Biden traveled to Africa on a three-country visit to Zambia, the Democratic Republic of the Congo, and Sierra Leone, to highlight how girls’ education and women’s participation in government and civil society can foster economic growth and strengthen government institutions.

Digital Briefing: An Update from Ben Rhodes on Ukraine

Deputy National Security Advisor Ben Rhodes provides an update on recent U.S. actions with regard to Ukraine and offers an overview of America’s policy position.