A movement to end police violence and racial profiling is growing. Since the brutal police killing of 18-year-old Mike Brown, you and nearly 900,000 people have raised your voices demanding full accountability for Mike’s death and condemning the crisis of racially-motivated police violence. Today, ColorOfChange, Organization for Black Struggle, and dozens of other progressive groups will go to the White House to deliver your voice and that of 900,000 others calling on President Obama and US Attorney General Holder to secure justice for Mike Brown and commit to systemic changes to policing nationwide.

Your voice has made an incredible difference and your commitment to abolishing racially discriminatory policing has brought us all the way to the President’s door. And we won’t stop there.

Will you help us build power to secure #JusticeForMike Brown and federal reforms to end police brutality by calling on friends and family to join the campaign? Every voice counts. 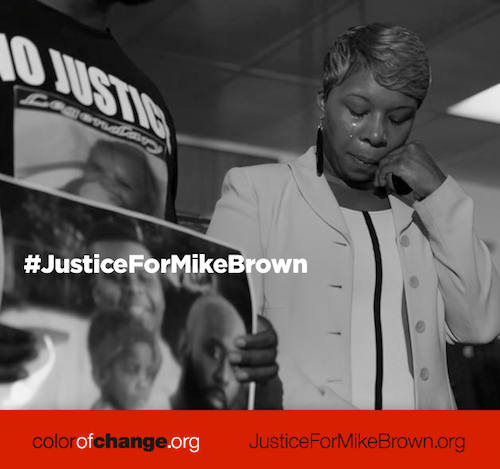 For the first time in years, federal officials are more engaged in addressing issues of police accountability and racial profiling. Now, we must act swiftly to leverage this critical moment and ensure that national leaders like President Obama and US Attorney General Holder bring Officer Wilson and other law enforcement who violate civil rights to justice.

Tomorrow, as we near the 9th anniversary of Hurricane Katrina, we will gather in front of the White House to send a clear message that this administration, elected from the power of Black voters, has a duty and responsibility to protect Black lives and show the necessary leadership to end the national crisis of police brutality. As we saw in the aftermath of Katrina, the federal government’s response to issues impacting Black communities has life and death consequences for our families.

While hundreds gather at the White House, help show your support by growing the movement to secure #JusticeForMikeBrown and an end to racially-motivated police violence.