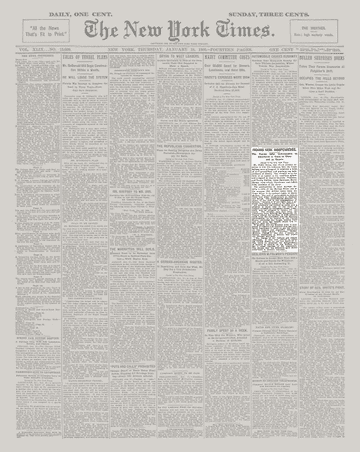 EL PASO, Texas, Jan. 17 — A circular received in this city indicates that the Yaqui Indians have attempted to establish a form of civil government and proclaim the independence of Sonora. The circular is in the form of an appeal to the American people, and is signed by Manuel Sauveda, President, and Teresa Duryea, Jesus Escalente, Harry Herbot, John Dwyer, Tenebanto, and Julian Villa, members of the Junta. View Full Article in Timesmachine

INDIANS SEEK INDEPENDENCE.; The Yaquis Offer Inducements to Americans to Come to Their Aid in Sonora.
Special to The New York Times.
Jan. 18, 1900

The article ‘Kakistocracy or The true story of what happened in the post-Soviet area’ argues that the countries, emerged after the collapse of the Soviet Empire, chose three distinct models of development: the Baltic model, when Estonia, Latvia and Lithuania joined the Euro-Atlantic security structures; the Belarusian model, when the country opted for an authoritarian rule with a possible transition from the communist totalitarianism to an open society; and the Russian model, when under the slogans of democracy and market economy a new type of regime was established in Russia and a number of post-Soviet countries.

To characterize this new type of regime the definition of ‘kakistocracy’ has been introduced, which means a merger between the state structures and the oligarchic elements as a result of the systematic plunder of national assets and establishment of a rule of lawlessness and illegal usurpation of power under the slogans of democracy and market economy.

Furthermore, the split of the CiS and the formation of two groups of countries, respectively the GUAM and the CSTO, have been considered from the viewpoint of their different strategic goals and orientations.

A section is devoted to the cardinal differences between the strategic visions of Yeltsin and Putin. The latter’s policy can be formulated as the Putin’s doctrine aimed at restoring Russia’s influence through centralization of power, internally, and demonstration of military force and energetic blackmail, externally. The kakistocratic regimes lead to a political and socio-economic collapse, triggering popular unrest. This exactly was the reason of the ‘orange’ revolutions, which in most of the cases are the only way to topple kakistocratcy.

In conclusion, it is suggested that the other way of getting rid of kakistocracy would be a cardinal change in Russia’s policy. While the strategic goal of the country should remain restoring its international influence and authority, the means should shift from heavily relying on military power and energetic resources toward focusing on the Russian spiritual values and potential for facing new threats and challenges to international peace and security.

1. Introduction
After almost two decades of the Soviet Union’s disintegration a lot remains to be clarified on what in reality took place in the former Soviet republics, what kind of transformation did they undergo and what are their development trends. This subject seems to be important for a number of reasons, which have both internal and external implications. To put it succinctly, it is crucial that a considerable part of the planet’s population could develop its political, socio-economic and cultural potential, internally, and contribute to the progress of mankind and international peace and security, externally.

The difficulty of in-depth understanding of the processes and trends in the post-Soviet area stems from the abundance of misinterpretations and false targets due to the euphoria after the collapse of the Soviet empire which, at first sight, heralded the end of the Cold War and the beginning of a new era. It was exactly in the late 1980s and the early 1990s that Francis Fukuyama’s “The End of History and the Last Men”, predicting that history should definitely choose liberal democracy as humanity’s ultimate achievement thus precluding any qualitatively new historic development, became and still remains a bestseller (Francis Fukuyama, 1992). It is exactly in 1990 that the Conference (at present – Organization) on Security and Co-operation in Europe adopted the Charter of Paris for a New Europe (1990), where the Heads of State or Government of the Conference solemnly proclaimed a ‘new era of Democracy, Peace and Unity’.

Indeed, in early 1990s the ex-Soviet countries were admitted to the United Nations1, became OSCE participating States and nowadays all of them, save Belarus and the Central Asian countries, are members of the Council of Europe, which per se could have been a clear indicator of their commitment to observe human rights and fundamental freedoms.

This accession to the international organizations and acceptance of the international instruments and laws went in parallel with internal changes, which seemed to bring about the establishment of democratic structures and market economy, thus ostensibly materializing the authoritative predictions of political scientists and the enthusiastic statements of politicians.

Unfortunately, over the past twenty years the historic reality proved to be a different one. The bypassing of the UN Security Council in some critical decision-making instances, the deep crisis of the OSCE, the transformation of the Council of Europe from an exclusive into an inclusive organization, where the behaviour of certain newly admitted members has become subject to periodic discussions and permanent concern – all these facts reflect the deeper tendencies of a new divide and discord between the West and the East and the international community’s obvious failure to unite its resources and political will vis-à-vis the new threats and challenges to international peace and security.

While discussing the causes of this divide and considering the possible ways out of such a situation should become subject to a comprehensive and detailed analysis, this article aims at concentrating on the real situation in the post-Soviet countries and its impact on the international developments. In order to achieve this objective the article will consider the different groups of states that emerged after the collapse of the Soviet Union, in particular, the CIS countries and the fault lines between them. Furthermore, an attempt will be done to formulate a definition meant to reveal the genuine nature of the ruling regimes in the bulk of the post-Soviet countries. It is all the more important since the nature of power in those countries triggered the so controversial ‘orange revolutions’, and will most probably trigger new ones jeopardizing the security environment not only internally, but regionally and even at a larger scale.

Understanding the real nature of the regimes that dominate in most of the post-Soviet countries is necessary for the politicians and the civil society both in those countries and internationally, because it is not possible to find a remedy without knowing the root causes of a threat, which is covered with the veil of good intentions but has an enormous potential to spread over stealthily and imperceptibly.

for the complete article … go to: sciencedirect.com