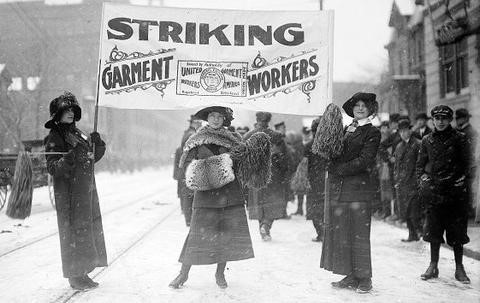 Some 10,000 clothing workers strike in Rochester, N.Y., for the 8-hour day, a 10-percent wage increase, union recognition, and extra pay for overtime and holidays. Daily parades were held throughout the clothing district and there was at least one instance of mounted police charging the crowd of strikers and arresting 25 picketers. Six people were wounded over the course of the strike and one worker, 18-year-old Ida Breiman, was shot to death by a sweatshop contractor. The strike was called off in April after manufacturers agreed not to discriminate against workers for joining a union – 1913

In Allegany County, MD, workers with the Civilian Conservation Corps, a New Deal era public works program employing unmarried men aged 18-25, are snowbound at Fifteen Mile Creek Camp S-53 when they receive a distress call about a woman in labor who needs to get to a hospital. 20 courageous CCC volunteers dig through miles of snow drifts until the woman is successfully able to be transported – 1936

DoorDash advertises that workers can make “up to $25/hour,” but we wanted to know what DoorDash workers are getting paid — after expenses like mileage and additional payroll taxes. So we crowdsourced pay data from more than 200 workers across the country and we ran the numbers.
We found that DoorDash is paying an astonishingly low $1.45/hour, after accounting for the costs of mileage and additional payroll taxes borne by independent contractors.

Meanwhile, the company itself is worth $12.6 billion. But their pay model is apparently to have workers deliver food effectively for free in hopes of collecting tips.
You can read the full report here, or read on for key details. (And don’t forget to check out the coverage in Hacker News, Gizmodo, Salon, Wonkette, and TechMeme.)
• On average, DoorDash pays just $1.45 per hour worked, after accounting for the expenses of mileage and the additional payroll taxes borne by independent contractors. The average job requires 6.8 miles of driving and takes 30 minutes to complete.
• A third of jobs pay less than $0 after accounting for basic expenses.
• Just 11% of jobs pay more than the federal minimum wage of $7.25/hour after expenses, and only 2% meet the standard of $15/hour + expenses.
• Despite the company’s insistence that they are no longer misappropriating tips, our analysis shows that jobs with higher tips tend to have lower pay. Jobs with higher tips tend to include less gross pay from DoorDash per hour, less gross pay per mile, and less net pay after expenses.
DoorDash was the first major food delivery app to use a black-box algorithm to set workers’ pay. They were the first major food delivery app to directly substitute tips for pay, and the last to back away from this wildly unpopular scheme. Now it appears DoorDash may soon become the first food delivery app to drive down pay to effectively zero after expenses.

It’s all the more reason why we’re building the Pay Up campaign: to reboot the gig economy with a pay floor of $15/hour + expenses, tips on top, and a detailed, transparent breakdown of pay.
If you’ve ever worked in the gig economy, if you’ve eer used gig economy apps as a customer, or if just want to show your support, click here to sign on to our campaign to make the gig economy pay up!