1803 – Thomas Jefferson, in secret communication with Congress, sought authorization for the first official exploration by the U.S. government.

1886 – The Hockey Association was formed in England. This date is the birthday of modern field hockey.

1896 – The x-ray machine was exhibited for the first time.

1911 – For the first time an aircraft landed on a ship. Pilot Eugene B. Ely flew onto the deck of the USS Pennsylvania in San Francisco harbor.

1919 – The World War I Peace Congress opened in Versailles, France.

1929 – Walter Winchell made his debut on radio.

1943 – During World War II, the Soviets announced that they had broken the Nazi siege of Leningrad, which had began in September of 1941.

1943 – U.S. commercial bakers stopped selling sliced bread. Only whole loaves were sold during the ban until the end of World War II.

1950 – The federal tax on oleomargarine was repealed.

1951 – Joan Blondell made her TV debut on “Pot of Gold” episode of “Airflyte Theatre” on CBS-TV.

1957 – The first, non-stop, around-the-world, jet flight came to an end at Riverside, CA. The plane was refueled in mid-flight by huge aerial tankers.

1958 – Willie O’Ree made his NHL debut with the Boston Bruins. He was the first black player to enter the league.

1964 – The plans for the original World Trade Center in New York were unveiled to the public.

1967 – Albert DeSalvo, who claimed to be the “Boston Strangler,” was convicted in Cambridge, MA, of armed robbery, assault and sex offenses. He was sentenced to life in prison. Desalvo was killed in 1973 by a fellow inmate.

1972 – Former Rhodesian prime minister Garfield Todd and his daughter were placed under house arrest for campaigning against Rhodesian independence.

1978 – The European Court of Human Rights cleared the British government of torture but found it guilty of inhuman and degrading treatment of prisoners in Northern Ireland.

1987 – For the first time in history the Public Broadcasting System (PBS) was seen by over 100 million viewers. The audience was measured during the week of January 12-18.

1990 – In an FBI sting, Washington, DC, Mayor Marion Barry was arrested for drug possession. He was later convicted of a misdemeanor.

1991 – Eastern Airlines shut down after 62 years in business due to financial problems.

1995 – A network of caves were discovered near the town of Vallon-Pont-d’Arc in southern France. The caves contained paintings and engravings that were 17,000 to 20,000 years old.

2002 – The U.S. Food and Drug Administration (FDA) announced the approval of a saliva-based ovulation test.

2012 – Wikipedia began a 24-hour “blackout” in protest against proposed anti-piracy legislation (S. 968 and H.R. 3261) known as the Protect Intellectual Property Act (PIPA) in the Senate and the Stop Online Piracy Act (SOPA) in the House. Many websites, including Reddit, Google, Facebook, Amazon and others, contended would make it challenging if not impossible for them to operate. 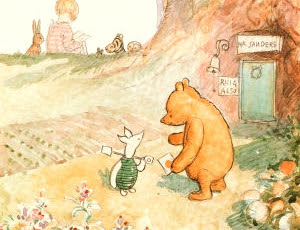 Winnie the Pooh, the “Bear of Very Little Brain,” continues to be a bear with lots of fame. In fact, Pooh is honored every January 18th, otherwise known as Winnie the Pooh Day. That particular date was chosen because it’s the birthday of Alan Alexander Milne (A.A. Milne), author of Winnie-the-Pooh (1926) and The House at Pooh Corner (1928). Without Milne, Pooh, Piglet, Tigger and the rest of the gang would never have seen the light of day. In honor of Pooh’s creator, let’s take a look at five fascinating facts about the man behind the honey-loving bear.

So, is this a great example for those who believe in hypocrisy and having no moral standards?  and just republican criteria? Come on