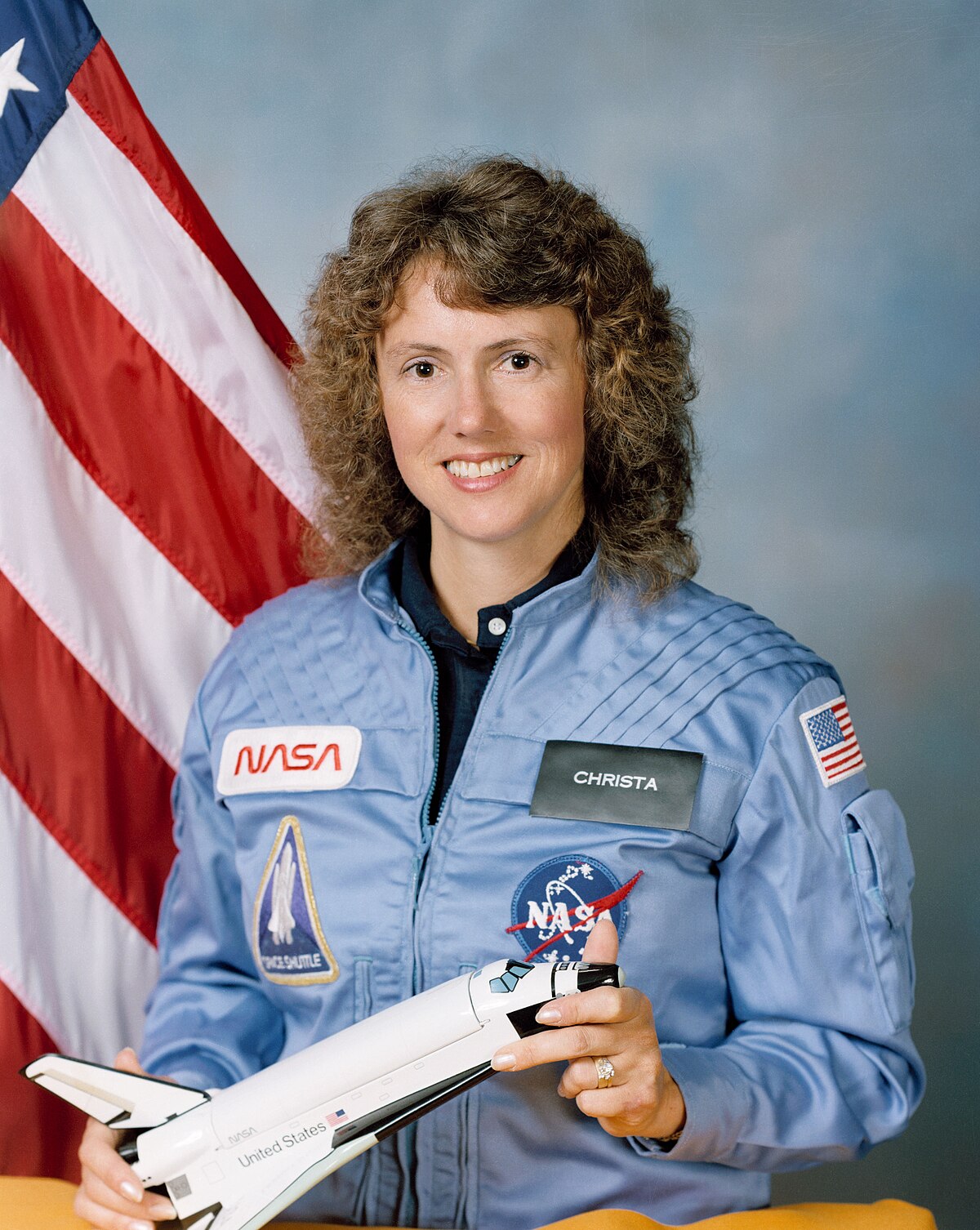 Christa McAuliffe was an American teacher, selected from more than 11,000 applicants to be the first teacher in space. Tragically, she died just 73 seconds after liftoff of the space shuttle Challenger, along with six other astronauts.

She is remembered as a heroine by her profession by attempting to touch the future. Beginnings Sharon Christa Corrigan was born in Boston, Massachusetts, on September 2, 1948. Her parents were Edward and Grace Corrigan; she was the eldest of five children. Her family moved to the Boston suburb of Framingham when she was still young. She graduated from Marian High School in 1966. Christa attended Framingham State College, and majored in history. She received her bachelor of arts degree in 1970. Christa married her longtime boyfriend, Steve McAuliffe, a few weeks following her graduation. Shortly after they married, the couple moved to Washington D.C., so Steve could attend law school.

Christa taught until their first child, Scott, was born. She went back to college to earn her master’s degree in school administration from Bowie State College in 1978. Shortly after that, the couple moved to Concord, New Hampshire, where their second child, Caroline, was born. Steve began his law practice, and Christa stayed home with the children.

A celestial opportunity Christa McAuliffe accepted a social studies teaching position at Concord High School in 1982. Two years later, she learned of NASA’s search for a teacher to fly on the space shuttle. NASA was looking specifically for someone who could teach classes while in orbit. McAuliffe could not pass up the opportunity. She filled out the 11-page application, mailed it at the last minute and waited. When she became a finalist, she still did not believe she would be the one picked; some of the other hopefuls also were doctors, authors, and even scholars. On July 19, 1985, however, Christa McAuliffe was selected by NASA to be the first teacher in space. Considered by her students to be an “inspirational human being, a marvelous teacher who made their lessons come alive,” McAuliffe lived up to her nickname, “Field Trip Teacher.” She insisted it was direct experience that made the most effective teaching tool — her upcoming voyage on the Challenger being the “Ultimate Field Trip.” In addition to seeking an innovative teacher, NASA was looking for a regular person to whom regular people could relate; McAuliffe was that person. She would be an ordinary person — to do the extraordinary.

A training regimen In the fall of that year, MacAuliffe took a year’s leave of absence (NASA paid her salary) to train for the 1986 space shuttle mission. She would be a payload specialist on the STS-51-L crew, teach lessons from space, and keep a journal of her experiences. McAuliffe wanted to show the crew that she was not just along for the ride and could work as hard as they did. The other crew members treated her as a part of the team. She trained with them for 114 hours, and when it was time to launch, she was ready.

The worst outcome However, on January 28, 1986, only 73 seconds after lift-off, the space shuttle Challenger exploded, killing all seven astronauts aboard. The entire world watched in horror and disbelief. McAuliffe’s mission to space ended in abrupt tragedy. Her motto was, “I touch the future, I teach”. She continues to teach by example to this day.

Posthumous honors The young teacher/astronaut has been honored at many events. She was awarded the Congressional Space Medal. The Christa McAuliffe Planetarium in Concord, New Hampshire, and the Christa McAuliffe Space Education Center in Pleasant Grove, Utah, were named in her memory, along with the asteroid 3352 McAuliffe and the McAuliffe moon crater. Numerous schools have been named after her as well.