See more from our “Photo of the Day” Gallery here 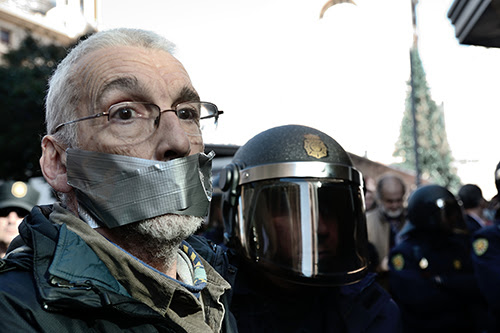 Our movement is under threat.

Governments worldwide are passing gag laws, prohibiting protest and closing down organisations in the biggest crackdown on civil society in a generation.

Avaaz staff have been kicked out of Egypt. And in India, the biggest democracy in the world, Avaaz has been vilified and harassed by the government.

Avaaz’s power is our voices together. If governments outlaw us or sabotage our strategies, we are done. It’s time to fight back! And we’ve got a new killer plan to protect our democracies — a global legal defense team.

The truth is, in the fight between people and power, the people rarely get a good lawyer, because it’s too expensive. That’s where we come in. Avaaz already has a tiny world-class legal team. But, if we build the biggest, baddest crowdsourced pro-democracy legal group in the world, we’ll challenge repressive laws when they are drafted, and then destroy the worst attacks in court.

Click to donate just the cost of a meal out and help Avaaz march into court across the world to protect our freedoms. Let’s meet those demonising our work with fearlessness and resolve:
In the last three years, over 60 countries have passed laws that inhibit non-governmental groups. In Spain Avaazers could be fined up to 600,000 euros just for organising a peaceful protest. In Israel a draft law threatens to label brave human rights organisations as “foreign agents”, and cut off their international funds. And in Uganda a government body could soon dissolve any group it doesn’t like!

But we already know Avaaz legal action works. When the South African government tried to censor our campaign against the lion bone trade, we took them to court and won a landmark free speech case that set a standard for the whole country. And with enough support, we can together:

These new regressive laws show politicians fear our emerging strength. We can’t let them now crush an informed and organised citizenship, it is a crucial pillar of democracy.

There are moments where risking everything is necessary to preserve the very core of our democratic freedoms. That’s what we did when taking on powerful media barons in the UK and government cronies in Canada. If we raise the funds now, we can take on those that try to silence us, everywhere.

P.S. If you are a lawyer who wants to be in the database of this global legal defense team click here.

Why are threats to civil society growing around the world (IPS News Agency)
http://www.ipsnews.net/2015/06/opinion-why-are-threats-to-civil-society-growing-around-the-world/