Boko Haram just used a 10-year-old girl as a bomb-detonator right after massacring up to 2,000 people. There is a reign of terror in Northern Nigeria.

But Nigerian President Jonathan has said almost NOTHING about this in his election campaign, and his brutal army, instead of protecting civilians, is fuelling the insurgency.

The world has put this crisis in the ‘too hard to solve’ box — the UN Security Council hasn’t even issued a Presidential Statement on Nigeria!

The only good news: escalating violence has renewed pressure to act.

Let’s multiply that pressure now and persuade our leaders and the United Nations to convene an emergency Security Council meeting and prioritise this crisis.

Join this urgent call — for the sake of that tiny, innocent girl, and all those like her at risk:

Nigeria is deep into a brutal conflict that’s ostensibly a Muslim/Christian war, but underlying it are tensions between an oil-rich, corrupt, ruling elite and a poor, disenfranchised and neglected North. Over 10,000 people were killed in 2014, and over 1.6 million Nigerians have fled their homes. Boko Haram now controls an area the size of Denmark.

Politicians have fed this divide, and the recent surge in violence comes in the middle of a deadly election campaign. Shockingly, President Jonathan’s under-resourced response could be part of a dark game — if there is chaos in the North and low voter turnout, he is more likely to stay in power since his support base is in the South.

International military advisers and special forces have been sent in, but there is hesitation about working with Nigerian units with terrible human rights records. The UN Council should now prioritise a comprehensive plan that includes cleaning up and training security forces to contain Boko Haram; investing in the poorest regions; and prioritising an anti-corruption programme.

This is not a short, sharp, shock strategy — this crisis cannot be solved in days — but it is immoral to ignore it any longer. Our global community can ensure the UN Security Council finally lays out a genuine plan for peace.

If we do nothing, thousands more will be killed, and the Boko Haram threat will spread. The attacks in Paris have reminded us that terror has no borders. Join the call:

With elections looming and violence escalating, Nigeria is like a boiling pot. Politicians have failed their people, and the international community has allowed the situation to deteriorate. We cannot wait any longer and with enough backing, a strong UN statement could begin to change the game. Let’s make it happen.

Alice, Pascal, Mike, Melanie, Marigona, Ricken and the rest of the Avaaz team

It’s been a few months since we sent you an update about our GoFundMe-Darren Wilson campaign. In that time we’ve been in dialogue with the company and its lawyers, and here’s where we’re at:

In October, GoFundMe donated its profits from the hateful Darren Wilson fundraisers to the Ferguson-Florissant school district. This was one of our top-line asks: for GoFundMe to stop profiting from racially-motivated donors. This donation was an important step and would not have happened without the actions of 130,000 ColorOfChange members. Collectively, we spoke up and put pressure on the crowdfunding company that they could not ignore, including this billboard right outside their offices: 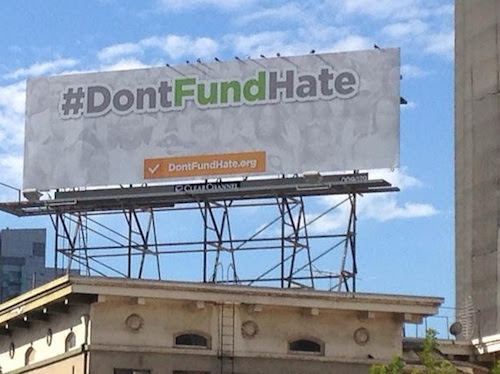 Moving forward, tech companies like GoFundMe know what the ColorOfChange community is capable of. And they know we’ll remain vigilant. Since the launch of our campaign, we haven’t seen anything like the Darren Wilson fundraisers on GoFundMe’s platform. If a similar fundraising drive does show up, the company knows that it will have to answer to us.

Our campaign targeting GoFundMe began when people started giving hundreds of thousands of dollars to Michael Brown’s killer, celebrating his death. We were disgusted and outraged. We know that these types of fundraising drives lower the social and financial costs of taking Black lives. They send the message that shooters will be supported in the aftermath of killing Black men and boys.

In 2015, we’ll continue our work combating the culture of hostility against Black folks that’s present across our country. Thank you for being part of it every step along the way.

President Obama has the power — and responsibility — to help end the nationwide crisis of police violence and its unjust consequences. 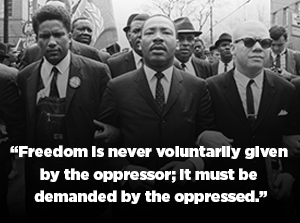 Urge Pres. Obama to issue an executive order directing the Department of Justice to rigorously enforce and expand civil rights law and federal bans on violent and discriminatory policing:

The Senate will recess from 12:30 until 2:15pm to all for the weekly caucus meetings. Prior to adjourning, Senator McConnell announced that senators should expect votes on pending amendments to S.1 starting shortly after the lunches.

On Tuesday, January 20, at 9:00pm, the President will deliver the State of the Union address. Senators will gather in the Senate Chamber at 8:30pm and proceed as a body to the Hall of the House of Representatives at 8:40pm.

The following amendments are pending to S.1:

The Senate is in a period of morning business until approximately 10:30am. Following morning business, we will resume consideration of S.1, a bill to approve the Keystone pipeline. Currently, we have 3 amendments pending to the bill in addition to the substitute. Discussions continue on a path forward today. During his opening statement, Senator McConnell announced that we will begin voting on those amendments and any other amendments in the queue shortly after lunch today. No agreement has been reached at this point, but we expect McConnell, or his designee, will move to table the amendments if no agreement can be reached.

We expect Senator McConnell, or his designee, to move to table the Markey amendment around 2:45pm today. We may also vote in relation to the Portman amendment and Franken amendments at that time as well. Discussions continue on the next amendments that may be offered to the bill.

At 2:50pm, the Senate began a 15 minute roll call vote on the Murkowski motion to table Markey amendment #13 (Keep Oil in America);

We could also vote in relation to the Portman-Shaheen amendment #3, as modified, and the Franken amendment #17 (Keep Jobs in America) (not necessarily in that order).

While we thought the Portman-Shaheen amendment could be agreed to by a voice vote, we now expect a roll call vote.

The following amendments are pending to S.1, Keystone XL Pipeline:

Completed the Rule 14 process to place on the Legislative Calendar of Business H.R.240, DHS Appropriations.

Last Floor Action:
8:35:48 P.M. – JOINT SESSION – The House convened in Joint Session with the Senate for the purpose of receiving an address from the President of the United States on the subject of the state of the Union.

Last Floor Action:1/16
4:04:06 P.M. – The Speaker announced that the House do now adjourn pursuant to a previous special order.