Arisha Michelle Hatch, ColorOfChange.org
The Supreme Court gutted Obamacare’s protections for Black women’s health but now there’s something we can do:

Last week, the Supreme Court sided with the far-right and gutted a key part of Obamacare’s protections for women’s health.

Black women are getting caught in the middle as the right-wing tries to chip away at the Affordable Care Act. Affordable access to contraception is a matter of life and death for Black women who are 3 times more likely to die from pregnancy-related issues than white women. Many of us regularly use contraception to treat endometriosis, manage uterine fibroids and alleviate PMS symptoms.1 The far-right is more concerned with tarnishing President Obama’s legacy than ensuring we have access to affordable healthcare.

But, we have a way to fight back!

The Protect Women’s Health From Corporate Interference Act was just introduced in Congress to reverse the Supreme Court’s decision gutting a woman’s right to birth control coverage. The bill states that federal laws, including the Religious Freedom Restoration Act used by Hobby Lobby’s right-wing lawyers, do not allow employers to refuse to cover health care — including birth control — guaranteed by Obamacare. It would ensure women at corporations like Hobby Lobby could make important health decisions with their doctors, not their bosses.

Tell the Senate: Pass the bill to reverse the Supreme Court’s attack on Black women’s healthcare.

Black women overall are at a higher risk for unintended pregnancy but have less access to insurance and preventative care.2 The contraception mandate in Obamacare would go a long way towards reducing cost barriers for our access to birth control and help close the gap in contraceptive use between Black women and our white and Latina peers — but we need Congress to reverse the Supreme Court’s damage. Politicians with an eye on November elections need to know that if they count on Black people to vote for them at the polls, they need to vote for the needs of Black women in Congress and pass this bill.

That’s why we’re teaming up with our friends at UltraViolet. If we shine a spotlight on this bill and bring it to a vote, we’ll know which members of Congress support Black women’s healthcare — and which side with 5 men on the Supreme Court. Will you sign?

Tell the your Senators: Reverse the Supreme Court’s attack our healthcare.

–Arisha, Rashad, Matt, Aimée, Johnny and the rest of the ColorOfChange team.
July 10, 2014

Rep Steve Scalise thinks if he stops talking about it, people will forget that in 2002 he went to a white supremacist conference to pander for votes.

In a press conference with House GOP leadership yesterday, Scalise simply referred reporters back to his previous statement saying, “I think that’s where the story ends.” Unfortunately, that’s not true. In it he claims to have shown up to speak about a tax plan that didn’t even have its first committee hearing until 10 days after the conference.1

Speaker Boehner is continuing to make excuses for Scalise rather than stand up to racism in his own caucus, hoping the story will just go away. With your voice, we can keep the story alive and demand that the GOP confront hatred in their ranks.

The #3 Republican in the House has admitted to associating with white supremacists. 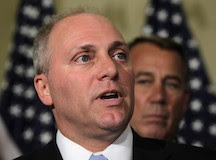 Following any Leader remarks, the Senate will resume consideration of the motion to proceed to S.1, the Keystone bill. The time until 5:30pm will be equally divided and controlled in the usual form.

The next meeting is scheduled for 5:00 P.M. today.